Visible scars were gone — the bullet holes, the bloodstained carpet — as the West Freeway Church of Christ in White Settlement, Texas, made an emotional return to its worship center Sunday.

Eight months after a gunman opened fire during the Lord’s Supper, new blue-cushioned pews, reconfigured walls and a lowered ceiling greeted the close-knit congregation west of Fort Worth.

“When you first walk in, it’s almost overwhelming,” Glenda White said. “It’s not the same place. 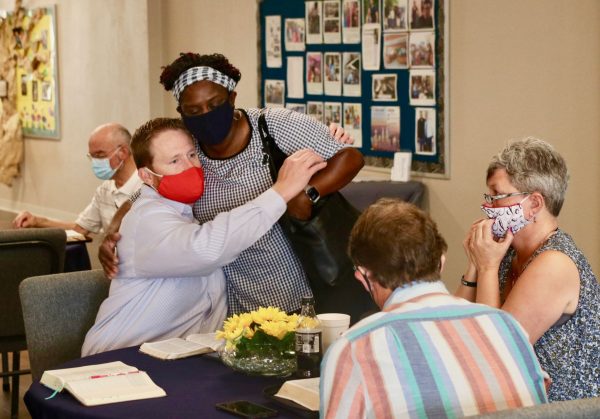 Glenda White, far right, and other Christians enjoy fellowship at the West Freeway church. Ryan Rutledge, in the red mask, hugs Ollie Young. Also at the table is Ron Rutledge.

“It is very beautiful,” she added. “But in my heart, it hurts because it had to be changed.”

It had to be changed because of the Dec. 29 shooting that claimed the lives of her husband, Richard White, 67, and deacon Anton “Tony” Wallace, 64.

Ron Rutledge kneeled over his wounded friends that traumatic Lord’s Day and tried to help.

He couldn’t bring himself to go into the renovated auditorium for Sunday’s assembly.

“I’m just not ready to go back in there yet,” said Rutledge, a longtime West Freeway member who stood in the foyer throughout the service. “I thought I would be, but I just don’t think I am.”

‘A lot of emotional trauma’

For weeks after the shooting, West Freeway members crowded into the fellowship hall next door to the locked auditorium to sing and pray.

But some people — including Wallace’s family — never came back.

They just couldn’t do it.

Then came the COVID-19 pandemic, forcing the congregation to meet online and delaying construction work. 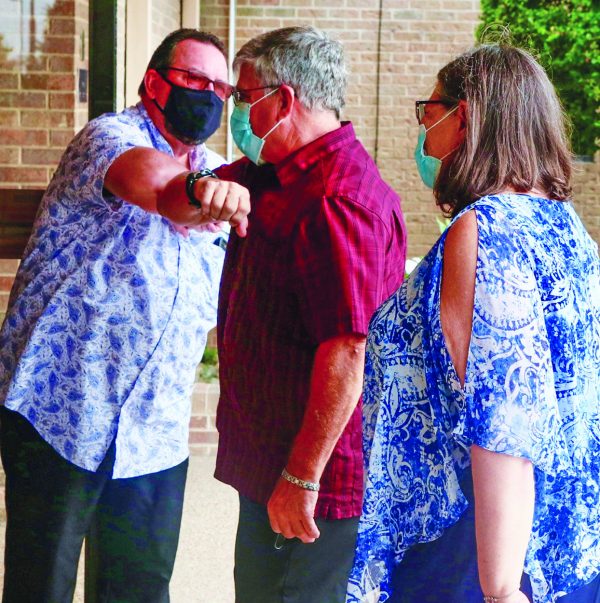 Leslie Rutledge understood why, of course. But being apart from her church family was difficult.

“When you tell people you can’t be around each other and can’t hug each other,” she said, “I’m like, ‘You’re telling me that I can’t go love on my brothers and sisters who went through this with us?’”

For Glenda White, however, the coronavirus outbreak provided an unexpected blessing: time alone to grieve.

“I was so busy making sure everybody else was OK. I was putting on a good front because I didn’t want to bring anybody else down,” White said. “And so it really — it forced me to really grieve him.

“It was one-on-one with me and these walls,” she said, referring to her empty house. 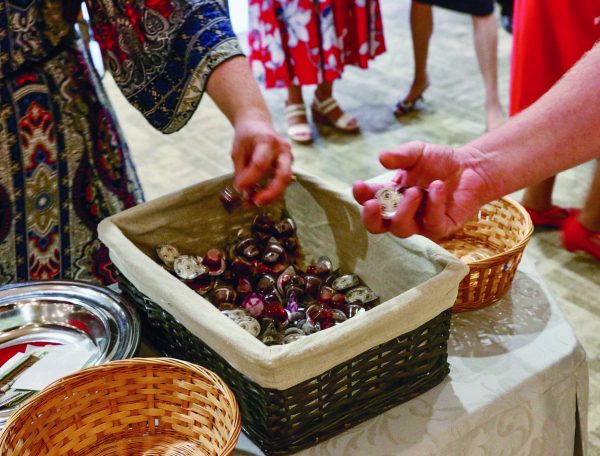 Members pick up individual communion packets on the way into worship Sunday.

Worship during a pandemic

For minister Britt Farmer and his church family, the new tan-carpeted stage wasn’t all that was different Sunday.

So were the masks — to prevent virus spread — that members wore on their way into the auditorium and any time they weren’t seated and social distancing. However, some members could not resist hugging their fellow Christians.

At the entrance, the congregation picked up portable communion supplies, a hygienic way of remembering the Lord’s death, burial and resurrection during the pandemic. The individual packages stood in contrast to the silver communion trays that were being passed when the stranger with a shotgun interrupted the Lord’s Supper.

“Welcome home,” Farmer said as he opened the service. “Isn’t it great to be back? Amen. To God be the glory.”

“Even now at communion time, there’s times when I get so nervous that it’s almost unbearable.”

“This old building had a renewal. Thank God for renewal,” said Galyean, a former FBI agent who has helped the congregation with post-traumatic stress disorder counseling. “Our Father in heaven provides us with a renewal, not in a cosmetic, cover-up basis but on a deep, spiritual level.”

Since the shooting, some in the church can’t partake of the Lord’s Supper without flashing back to Dec. 29.

“Even now at communion time,” Glenda White said, “there’s times when I get so nervous that it’s almost unbearable.” 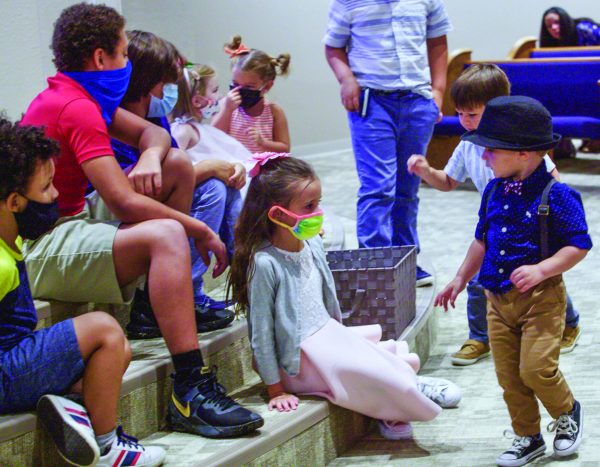 Ian Thomas, wearing the hat, and Isaac Kaag behind him pass by the basket for “Coins for Christ” donations Sunday. Facing Ian is Brenavere Thomas. Others include Zacari Conner, Hayden Cassady, Franklin Kaag, Anniston Jones and Irelynn Bessent.

‘We’re where we need to be’

Before the sermon Sunday, about 20 children joined Farmer at the front of the church.

The boys and girls, most wearing masks, placed change in a basket as part of a “Coins for Christ” ministry.

Then the congregation sang “Jesus Loves Me” before Farmer prayed for the little ones — many of whom witnessed the shooting. 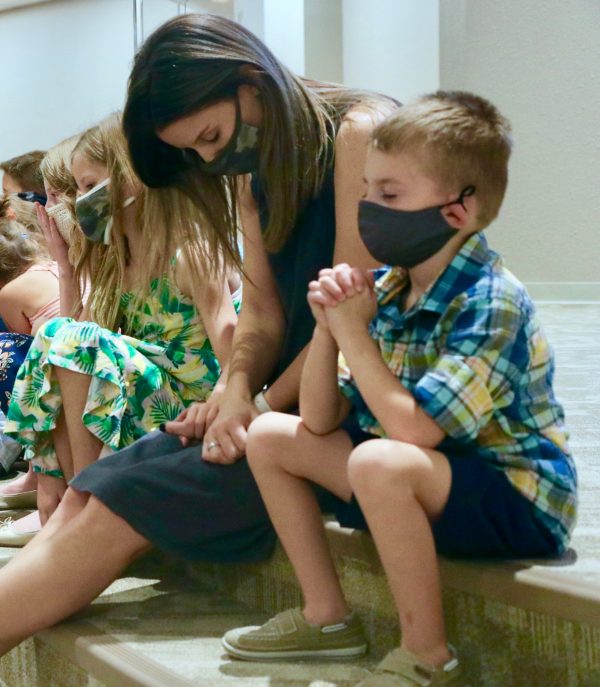 Children and some parents pray on stage during Sunday’s assembly. Pictured at right is Lincoln Jones, who is seated beside Monica Hargrove.

“That was what I was anticipating, probably more than anything, was having our children back up,” Farmer told The Christian Chronicle. “That was almost like, ‘OK, we’re back. We’re where we need to be.’”

“Everybody who walks in there is going to know and remember,” the minister said. “But, I think, just walking in is going to be so different that it is going to take their mind off of it, and they won’t have to visualize what they saw that day.”

Christians across the nation prayed for the West Freeway church and gave money to help with the renovation, Farmer said.

“I think the one thing that I would like to say is: Thank you so much to everybody that’s really been a blessing to help us get through this,” he said. “We believe in the power of prayer.”

He’s grateful, too, for the church’s leaders.

“God has given us the people that we need in the congregation to be where we are right now,” Farmer said. “The leaders have looked out for the welfare of the congregation, and it’s been a blessing in a lot of ways.”

The congregation recognizes its leaders for their service during an extremely trying time.

‘Evil did not win’

Farmer titled Sunday’s sermon “Blessed Be Your Name,” based on the praise song by Matt Redman.

“We are back, and evil did not win, and evil will not win.”

“We are back, and evil did not win, and evil will not win,” the minister told the congregation.

The West Freeway church sits in the shadow of a busy interstate and frequently encounters homeless people. Members don’t want to frisk people at the door. They prefer to love them and show them Jesus.

On the day of the shooting, church security team members, including Glenda White, noticed the strange-looking man the moment he walked in the door. 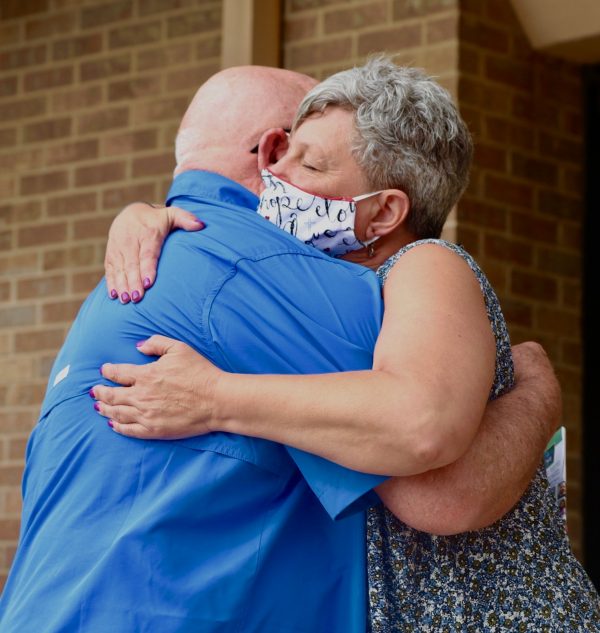 Kinnunen’s appearance — a long black wig, a fake beard and a bulky jacket — turned out to be a disguise. Until Farmer saw a picture later, he did not recognize the gunman, whom the church had helped with food in the past. Kinnunen had become angry when the church refused to give him money, the minister said.

But while the armed volunteers focused attention on him, they did not prevent him from taking a seat.

“He laid down his life for a lot of people that day. I don’t want people to forget that.”

When Kinnunen rose with a shotgun during the Lord’s Supper, Richard White, standing at the back, reached for his pistol and yelled, “Drop it!”

“He laid down his life for a lot of people that day,” Glenda White said of her husband. “I don’t want people to forget that.”

On Sunday, she put on her dress and brought her gun with her to worship, just as she did eight months ago.

She wants to be the same caring and giving person she was before the shooting. 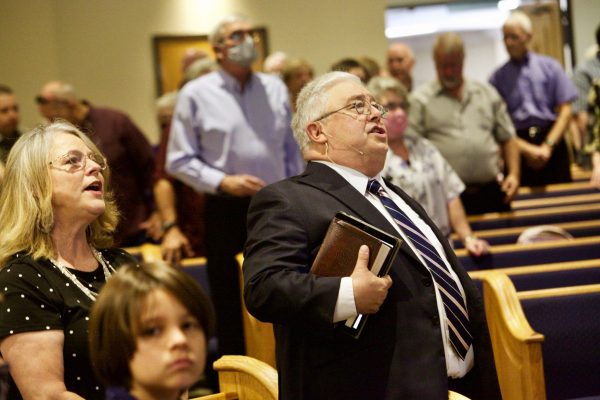 “I pray over this more than I do anything else really: I’m upset at the fact that I’m not as trusting as I used to be,” she said. “It’s really, really tough — after you go through something like that — to embrace that again.”

She’s trying hard “because I know that’s what Rich would want me to do.”

“I am exhausted emotionally,” she said afterward, “but it felt good to take that next step.” 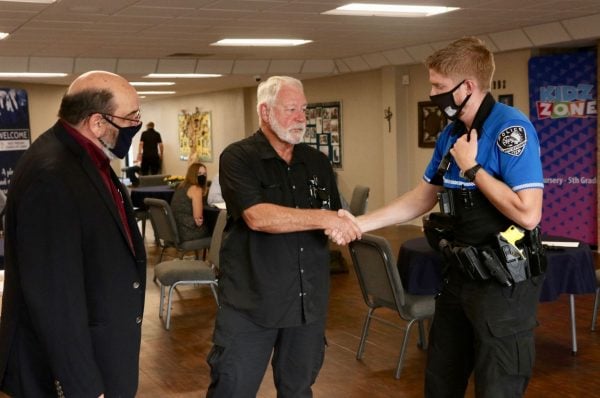