Ministers discuss experiences as panel explores how to protect congregations from attacks.

But the two preachers — one from Texas, the other from Tennessee — greeted each other like old friends.

These ministers belong to an exclusive club. It’s one nobody would volunteer to join.

“It’s funny how our situations are the same and so different, too,” said Spann, who still has a bullet in his chest.

The two talked about their ordeals during the recent 84th annual Bible Lectureship at Freed-Hardeman University, a 2,100-student higher education institution associated with Churches of Christ.

Listen to the full discussion:

Farmer and Spann were joined on the “Christian Chronicle Live” panel by Stewart Brackin, a retired California police captain.

“We have to, unfortunately, prepare for these things,” said Brackin, who directs Freed-Hardeman’s Office of Safety and Security.

He stressed that specific best practices depend on factors such as building layout, congregation size and gun laws that vary from state to state.

“I think there can be a tendency where we handwring, and we become so worried that we end up talking about this more than we talk about the gospel of Christ.”

While taking safety precautions is important, Christians shouldn’t become so focused on security that they lose sight of their real mission, Brackin said.

“I think there can be a tendency where we handwring, and we become so worried that we end up talking about this more than we talk about the gospel of Christ,” the officer said.

Since 2000, 19 fatal shootings have occurred at Christian churches in the U.S., according to Nashville-based LifeWay Research. Gunmen also have taken lives at Jewish synagogues, a Sikh temple and an Amish school.

About 4 in 5 Protestant pastors say their church has some type of security measure in place when members gather for worship, a LifeWay survey found. 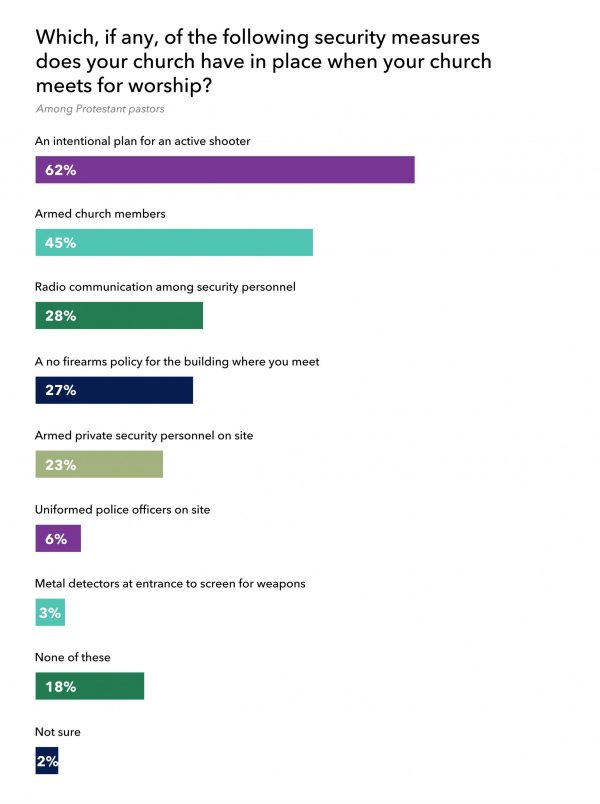 Note: Survey respondents could select more than one response.

During the panel discussion, Farmer emphasized his wife’s support since two members — Richard White and Anton “Tony” Wallace — were shot dead Dec. 29 at the West Freeway Church of Christ in the Fort Worth suburb of White Settlement.

“Lisa, I love you,” said Farmer, his voice choked with emotion. “Thank you.”

“My wife is here somewhere,” Spann responded, looking for Peggy in the Loyd Auditorium audience. “I love you as much as he loves her.”

A Sept. 24, 2017, attack on the Burnette Chapel Church of Christ in Antioch, southeast of Nashville, killed member Melanie Crow and wounded seven others, including Joey and Peggy Spann.

After the declaration of love, Farmer smiled and patted his new friend on the back.

“I told you I liked him already,” the Texas minister said. 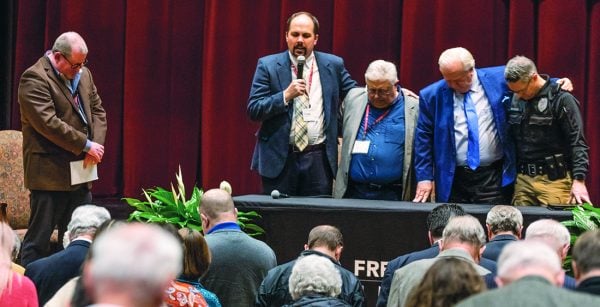 Doug Burleson, director of the Bible Lectureship at Freed-Hardeman University in Henderson, Tenn., leads a prayer at the conclusion of the panel discussion. Also pictured, from left, are Bobby Ross Jr., Britt Farmer, Joey Spann and Stewart Brackin.

Prepared for an attack?

That was a scenario, they figured, for a larger church or a bigger city like New York or Los Angeles.

Related: ‘We do not go to church anymore’

So when a masked gunman opened fire, Spann said, he tried to fight him off with a prayer box.

After the gunman shot Crow outside, Spann explained, “I was waiting for him to come in so that I could hit him with this one-and-a-half-pound prayer box. He knocked that off pretty easily.” 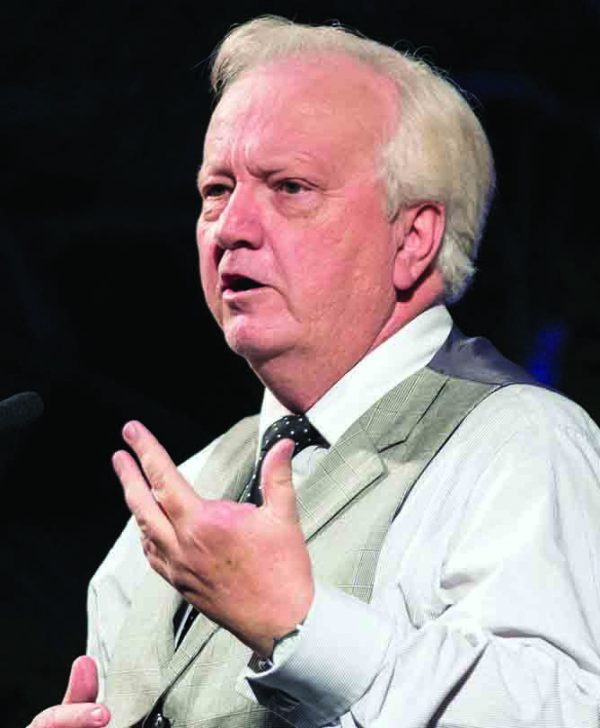 Joey Spann holds up his left hand — minus the index finger he lost in the shooting — while speaking at Lipscomb University in Nashville, Tenn., in 2018.

Besides the bullet in his chest, the preacher was shot in the hand and lost a finger.

In Texas, the 280-member West Freeway church had beefed up security after more than two dozen people died in a Nov. 5, 2017, massacre at the First Baptist Church of Sutherland Springs. 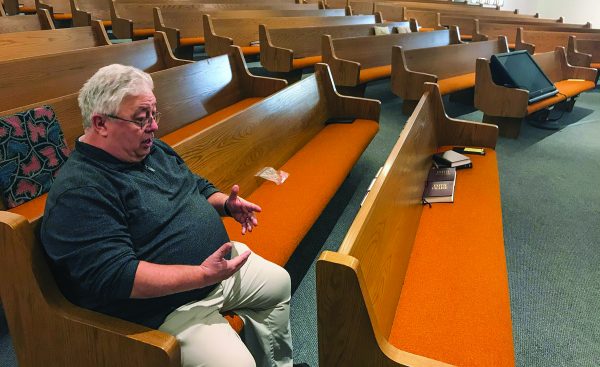 The day after the West Freeway church shooting, minister Britt Farmer sits in the spot where he witnessed two of his fellow church members lose their lives.

In each case, the gunman wore a disguise but turned out to be someone known to the church.

“The man who shot up our church — we’d baptized him into Christ three or four years earlier,” Spann said. “He had worshiped with us, with his friends.

“He was a great kid, a great, great young man. … He ate with us. He worked at our Vacation Bible Schools,” the minister added.

But at the trial, Spann said he realized, “He wasn’t that boy that we knew five years earlier.”

In West Freeway’s case, Farmer recognized the shooter when he saw a photo of him.

“We’ve helped him on several occasions with food,” Farmer told the Chronicle the next day. “He gets mad when we won’t give him cash. He’s been here on multiple occasions.”

During the FHU discussion, the Texas minister recalled that the last time he saw Kinnunen, he did, in fact, offer him all the change he had in his pocket. But upset at the amount, Kinnunen threw the $2 back at him and said he could keep it.

Since the Burnette Chapel killer survived, members have faced questions about whether they forgive him.

Yes, they do, Spann said.

In Matthew 25, Jesus talks about ministering to the “least of these,” including those in prison. Spann indicated he plans to go see Samson. 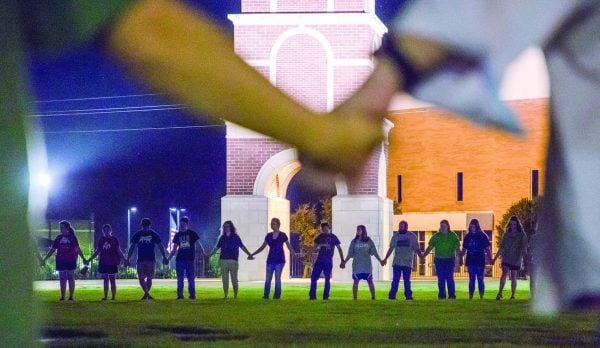 In 2017, students at Freed-Hardeman University in Henderson, Tenn., gather for a special prayer after a mass shooting targeted the Burnette Chapel Church of Christ. The attack left one member dead and seven others wounded.

Refusing to live in fear

In both cases, the churches blame the shootings on evil.

Spann and Farmer said they choose to trust God and refuse to live in fear.

“It was an attack upon the Lord’s church, spearheaded by Satan,” Spann said of what happened at Burnette Chapel.

Related: ‘We are not giving up’

But God doesn’t want Christians to live in fear, he said.

When the Burnette Chapel church restored its auditorium, members had to choose between chairs and pews.

Spann liked the idea of chairs, but the congregation favored pews.

In Farmer’s case, he said his first instinct was anger, not fear. Now, though, he worries about losing other loved ones.

To combat that fear, he focuses on showing the love of Christ. The West Freeway church sits in the shadow of a busy interstate and frequently encounters homeless people.

The day after the shooting, a stranger walked into the church and immediately drew attention from members patching bullet holes in the auditorium. 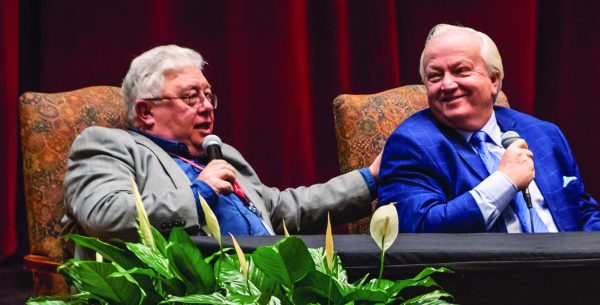 At the Freed-Hardeman University Bible Lectureship, Britt Farmer and Joey Spann reflect on their experiences with church shootings.

“Hey, how are you doing?” Farmer asked the man.

“Well, sure,” the minister said.

Farmer fixed him a lunch bag and gave him socks, mouthwash and a new pair of gloves because the ones the man was wearing looked “completely wornout.”

“Whenever he walked outside, he was smiling,” Farmer said. “Evil is not going to stop us from doing what God wants us to do.”

Want to hear more “Christian Chronicle Live?” Listen to our 2019 Harding University panel on sexual predators in the church.