FORT WORTH, Texas — At first, Glenda White didn’t realize that her husband, Richard, had been shot.

When gunfire broke out during Sunday worship at the West Freeway Church of Christ in White Settlement, Texas, west of Fort Worth, the former church secretary sprang into action.

“She stood in front of me with a gun in her hand, moving children out of harm’s way while her husband — unknown to her — lay in the back shot,” minister Britt Farmer told more than 650 mourners, including Texas Gov. Greg Abbott, at his best friend Rich White’s funeral Thursday. 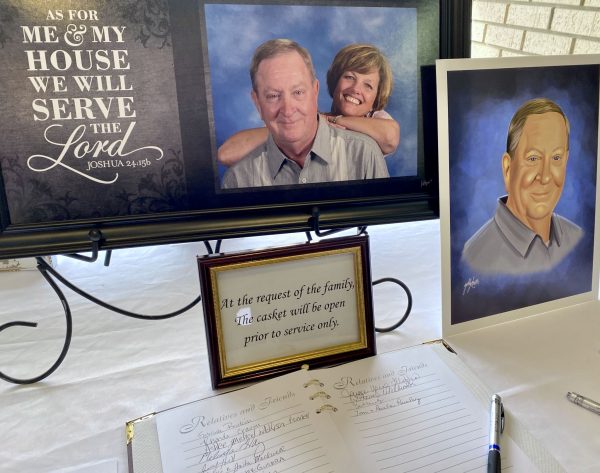 A picture of Richard and Glenda White is seen by the guestbook at Rich White’s funeral.

Both husband and wife had trained to protect their fellow Christians as part of the congregation’s volunteer security team.

That team of armed Christians was mobilized in response to the Nov. 5, 2017, massacre that claimed more than two dozen lives at the First Baptist Church of Sutherland Springs, Texas, 300 miles south of White Settlement.

“In a time of decision, they moved toward the danger,” Rich White’s brother Steve White said of the couple.

This is the good guy with a gun who stopped a bad guy with a gun at the church in White Settlement. It took 6 seconds. He saved countless lives. He is Jack Wilson and a true Texas hero.

“The only good that will come from this is that churches will no longer be seen as soft targets, at least not in Texas,” Rich White’s younger brother Jay White said.

At Thursday’s memorial service at the Western Hills Church of Christ in Fort Worth, Rich White was remembered as a hero who sacrificed his own life to save many. The sister congregation hosted the funeral because the West Freeway auditorium remains closed for repairs.

“The book of John teaches us that there is no greater love than to lay down your life for your friends,” Abbott told White’s family, friends and fellow Christians, referring to John 15:13. “Rich White lived that lesson. 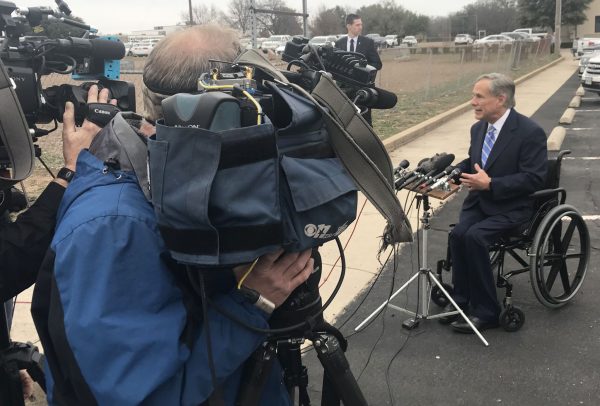 After the funeral for Richard White, Texas Gov. Greg Abbott talks to reporters outside the Western Hills Church of Christ in Fort Worth.

“Now, here’s what no one knows — what only God knows,” the governor added. “And that is: Who in this church is alive today because of what Rich White did and because of what Jack Wilson did to stop the shooter before others were harmed?”

A Texas law, supported by the Republican governor and passed two years ago, authorizes anyone with a concealed-carry license to bring a weapon into a house of worship.

The top elected official for the Lone Star State’s 28.7 million residents reflected on his own faith journey after a tree fell on him in 1984 — when he was 26 — and left him paralyzed.

“I felt an increasing bond and greater closeness with God,” Abbott, who is Roman Catholic, said of his experience. “As I leaned on God more and more, he truly became my shepherd. Like you, my life was forever changed in an unexpected moment.”

The governor spoke from his wheelchair on a stage adorned with a portrait of Rich and Glenda White and flanked by colorful bouquets. He urged the traumatized congregation to unite as “children of God” and seek the Savior’s guidance.

“In the fullness of time … God will lead you out of the ‘valley of the shadow of death,’” the governor said, invoking Psalm 23:4. “As dark as this day is, with God’s grace, your lives will once again shine brightly. Jesus told us (in Matthew 19:26): ‘With man, this is impossible. With God, all things are possible.’” 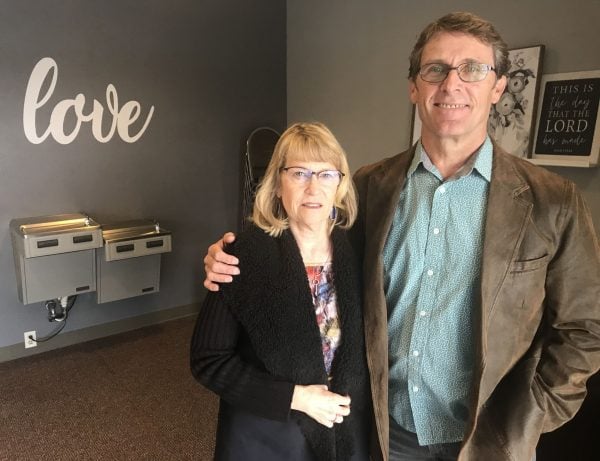 Ron and Leslie Rutledge at the Western Hills Church of Christ for Thursday’s funeral.

A step in healing process

Ron and Leslie Rutledge, members of the West Freeway church since 1985, were among the hundreds of mourners who came to remember White.

On Sunday, seated on the opposite side of the auditorium from the shooting, Leslie Rutledge at first thought the popping she heard was an electrical problem. When she realized the truth, she dropped to the ground, as trained to do. Afterward, she comforted those who were hysterical, offering hugs and support.

Ron Rutledge was standing in the back, holding a silver tray of grape juice during the Communion. He didn’t see the shots that struck White and Wallace, but he turned his head and witnessed the one that killed Kinnunen.

“As soon as that happened — like I’ve told many people, don’t ask me how I got over there — but I was next to Richard,” Ron Rutledge said. “And he was gone, immediately.”

But Wallace, a registered nurse, remained conscious and said he needed help. Ron Rutledge and other church members tended to him until emergency personnel arrived. Wallace later died at the hospital. His memorial service will be Jan. 11 at the Altamesa Church of Christ in Fort Worth.

Tony Wallace was one of the shooting victims today. His life was devoted to helping save others. Loved by his family and…

For the Rutledges — like the rest of the West Freeway congregation — Thursday’s funeral represented another small step in what is likely to be a long journey of healing and recovery.

White was an avid outdoorsman who loved to golf, hunt, fish, camp and just be outside enjoying God’s majesty, according to his obituary read at Thursday’s service. He was an Eagle Scout and decades-long member of the West Freeway church.

“Family jokingly called him ‘John Wayne’ for his classic country cowboy look of jeans and boots,” the obit recounted. “When friends talk about Rich, they use words like loving and loyal, kind, brother, dependable, a servant heart, mentor, selfless, giving, and so many other adjectives that describe his tender and selfless heart.”

Younger brother Jay White joked that Rich White “set the bar pretty high” by having the governor speak at his funeral and the president tweet about him.

“Our prayers are with the families of the victims and the congregation of yesterday’s church attack,” President Donald Trump posted Monday on Twitter. “It was over in 6 seconds thanks to the brave parishioners who acted to protect 242 fellow worshippers. Lives were saved by these heroes, and Texas laws allowing them to carry arms!”

Our prayers are with the families of the victims and the congregation of yesterday’s church attack. It was over in 6 seconds thanks to the brave parishioners who acted to protect 242 fellow worshippers. Lives were saved by these heroes, and Texas laws allowing them to carry arms!

Armed congregants quickly stopped a crazed church shooter in Texas. If it were not for the fact that there were people inside of the church that were both armed, and highly proficient in using their weapon, the end result would have been catastrophic. A big THANK YOU to them!

Jay White offered this message to his family in the wake of the shooting: “Don’t hate. Let me repeat that word: Do not hate. Do not harbor hatred in your heart toward anyone. Don’t let anger cloud your view of the world and harden your heart to those around you.”

Then he paused. For six seconds.

“That’s not very long, is it?” he said. “Last Sunday, evil confronted good in a battle that is as old as time. In those six seconds, lives were lost. Lives were saved. And this time, good triumphed over evil.”

Kinnunen had an extensive criminal record and psychological history that would have barred him from legally buying the shotgun he used during Sunday’s attack, according to The Associated Press.

The shooter slipped into the Sunday service wearing a long black wig, a fake beard and a bulky jacket, witnesses said. Farmer told The Christian Chronicle on Monday that he recognized Kinnunen after seeing a picture of him without the disguise. The church had helped him with food on several occasions, but he got mad when they wouldn’t give him money, the minister said.

“I can tell you with absolute certainty that had that intruder simply entered the church and asked Rich for help — food, clothes, a ride, gas, even the shirt off his back — he would have given it to him with a smile,” Jay White said at the funeral.

“I’ll go further,” the victim’s brother added. “If that man had lowered his gun, Rich would have talked to him and offered to help him as the man of God he was. Hate was not in his vocabulary.”

White’s daughter Kristy Moreland told the congregation about trips she and her father took to West Texas when she was a teen. She’d see historical markers and ask to stop. Her dad would joke that he already knew what the marker said: “Well, that was the first Dairy Queen, and it burned down.” And later, “That was the second one, and it burned down, too.”

“Dad, until we meet again at Dairy Queen, I love you,” Moreland said. 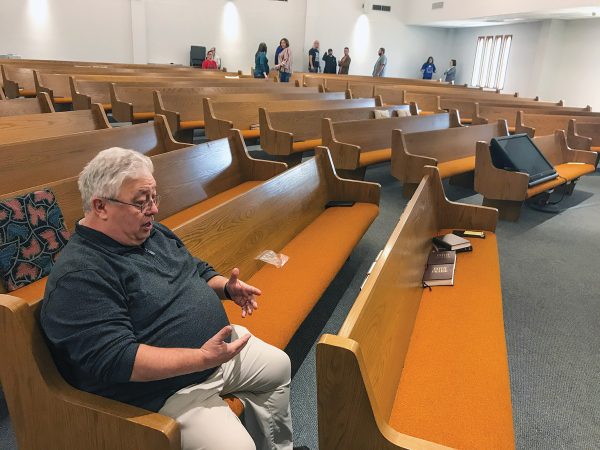 Minister Britt Farmer sits in the spot where he witnessed two of his fellow church members lose their lives Sunday.

“I hurt like I’ve never hurt before,” he said.

“There are people here today because Rich White taught them about God and furthered their faith and strengthened their faith.”

But he said White lived his life in such a way that he saved many — even before Sunday.

“There are people here today because Rich White taught them about God and furthered their faith and strengthened their faith, myself included,” Farmer said.

He ended the funeral with a prayer.

“We ask, Father, that you comfort our hearts and wrap your arms of love around us,” Farmer said, “and let our tears heal us from the inside out, and let us know that you are God.”