A gunman opened fire during the Lord’s Supper at a Church of Christ in Texas this morning, killing two worshipers.

At least one armed member immediately returned fire and killed the shooter at the West Freeway Church of Christ in the Fort Worth suburb of White Settlement, law enforcement officials said.

“Today, evil walked boldly among us,” Tarrant County Sheriff Bill E. Waybourn said at an afternoon news briefing. “But let me remind you: Good people raised up and stopped it before it got worse.”

The victims have been identified as Richard White, 67, a member of the church’s security team, and Anton “Tony” Wallace, 64, a deacon who was serving communion.

The Texas Department of Public Safety said the shooter was Keith Thomas Kinnunen, 43.

“The citizens who were inside that church undoubtedly saved 242 other parishioners,” said Jeoff Williams, Texas DPS’ regional director. “The true heroes are the people who were sitting in those pews today — the immediate responders who saved their fellow citizens. I just can’t overstate how critical that is for everyone to recognize. It is truly heroic.”

It was the leader of the church’s security team — Jack Wilson — who returned fire, shooting Kinnunen.

On his Facebook page, Wilson posted about the shooting, saying, “The events at West Freeway Church of Christ put me in a position that I would hope no one would have to be in, but evil exists and I had to take out an active shooter in church.”

“The citizens who were inside that church undoubtedly saved 242 other parishioners.”

“We lost two great men today, but it could have been a lot worse,” Farmer said. “And I am thankful that our government has allowed us the opportunity to protect ourselves.

“We have a congregation here of open-hearted people,” he added. “We’re help people — we’re here to help people — and to have something like this happen destroys my heart. When I say destroys, it destroys it because there is evil in this world.

“Today is one sermon I’ll never preach. It’ll go away. But it was called ‘Leaving a Legacy,’ and two men today left a legacy. The congregation is going to build on that legacy.”

A video of the church’s worship assembly, viewed by The Christian Chronicle, showed a man saying something to a member holding a communion tray. Then the man backed up, pulled out a weapon and started firing near the back of the nearly full auditorium. In just a few seconds, at least one armed member returned fire, and the shooter fell to the ground.

Additional members with handguns approached the gunman as the gunfire ended — the loud blasts replaced with screams and tears from the shocked congregation.

No one should be subjected to gunfire in a house of worship. Our hearts go out to those affected by the tragedy in White Settlement today. Details of the shooter are currently under investigation. @FBIDallas @ATFDallas @FortWorthPD @FortWorthFire

“Tragically, the person shot by the suspect died at a local hospital, and a second parishioner has life-threatening injuries,” White Settlement Police Chief J.P. Bevering said. Officials later announced that the second church member had died, too.

Bevering offered his condolences to the church and said, “We’re all hurting right now. I just want your prayer for everybody at this time.”

The Texas Rangers and state DPS are leading the investigation into what happened, the chief said. Others involved in the joint law enforcement response include the FBI, the White Settlement and Fort Worth police departments and the Tarrant County sheriff’s office.

“We are working very hard to find motive and get to the bottom of what happened,” said Matthew J. DeSarno, the FBI’s Dallas special agent in charge.

“Today, evil walked boldly among us. But let me remind you: Good people raised up and stopped it before it got worse.”

This marks the third fatal Sunday shooting at a Church of Christ in just over two years.

In September 2017, an attack on a Tennessee congregation killed Melanie Crow and wounded seven others.

Earlier this year, church elder Gordon Parmenter died after an armed man entered the church’s building in the western Canadian province of British Columbia and opened fire with an “assault-style rifle.”

He and his wife hit the ground and he laid on top of her to protect her.

Here he selflessly says that he’s praying for the suspect’s family. pic.twitter.com/QFFjGpqMai

Statement on shooting at West Freeway Church of Christ in White Settlement: pic.twitter.com/Crrrvavvs6

It’s a very sad day. Please pray for my family as we lost a dear friend today. A man I looked up to is gone to a senseless act of violence. I love all of you. Pray for comfort for his family and the comfort of the church family collectively. #PrayForWestFreeway

This video is incredibly horrendous.

One of the men shot had just read Proverbs 13: 22-25 before the congregation.

Before communion, the pastor said the church was a family.

Another member prayed for wisdom and blessings for the church in 2020.#PrayForWestFreeway

A bit of history of the West Freeway Church of Christ, the Fort Worth-area church where today’s shooting occurred. Minister Britt Farmer shared this info with me in 2017. #PrayforWestFreeway pic.twitter.com/SXdzBJMpJ6

The Harding family sends prayers and deepest sympathy to our brothers and sisters at the West Freeway congregation in Texas as they cope with this morning’s shooting during worship. May the God of all peace comfort those affected by this tragedy. https://t.co/75Yu63Mzxv

From President @davidshannonfhu : "Our hearts are broken, as we pray for the West Freeway congregation. The FHU family and brothers and sisters around the world are praying for you. We love you. The Psalmist knew God is the only hope, even in the day of tragedy. Psalms 46:1,11" https://t.co/cloavFYrGl 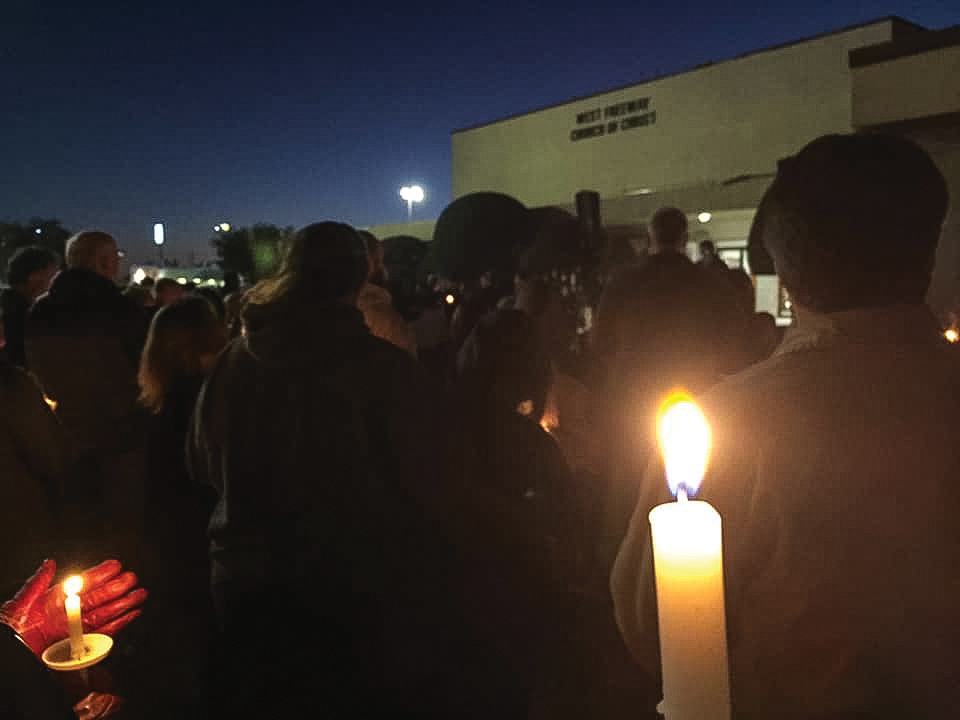 WHITE SETTLEMENT, Texas — On Dec. 29, we watched in terror…