SANTIAGO, Chile — “Can we talk over here?” asks Alejandra Huezo, moving from a grove of shade trees to a park bench bathed in sunlight.

After three years in Santiago, the El Salvador native is still getting used to the chilly Chilean winters.

Her new church seemed a little cold, too — at first, says Huezo, who worships with the Iglesia de Cristo congregación Providencia, the Providencia Church of Christ.

Sunday morning worship (and a special recognition of the congregation’s fathers) with the Providencia Church of Christ in Santiago, Chile. #christianchronicle #churchofchrist #santiagochile

“Chilean culture is different, not as accepting,” says Huezo, who grew up in the Miramonte Church of Christ in San Salvador. “But step by step, they trust in you. Now we’re working with the youth, and we feel like we’re family.” 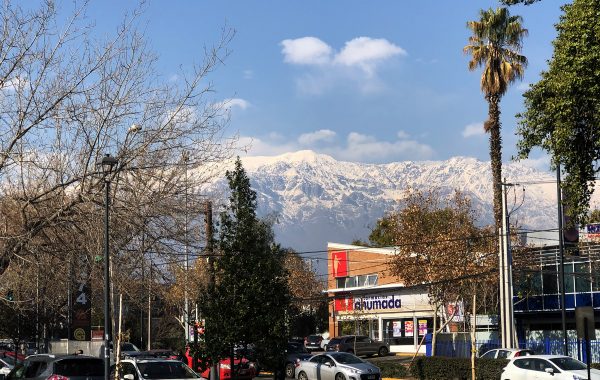 Mountains and palm trees are part of the scenery visible from a park near the meeting place of the Providencia Church of Christ.

The middle-class congregation meets near the neatly manicured park in a neighborhood whose name means “providence.” A team of U.S. missionaries planted the church, and the last member returned to the States only weeks ago. Now the church is self-supporting and has members from nations including Chile, Colombia, Haiti and Venezuela.

Huezo moved here with her husband, Nico Rodriguez, who was offered a job with a financial firm.

After Sunday morning worship, as she talks in the park, her husband is in the church building, meeting with fellow leaders about the best way to help a Venezuelan family.

That’s a common topic, Huezo says. The church has housed five Venezuelan refugees in its guest rooms. Members shared the Gospel with them and baptized them.

As Sunday worship concluded, a Venezuelan woman addressed the congregation, thanking them for helping her find a job.

Related: ‘The blessing is ours’

Chile enjoys a level of prosperity greater than that of its South American neighbors, and the United Nations consistently ranks it as having the highest standard of living on the continent. 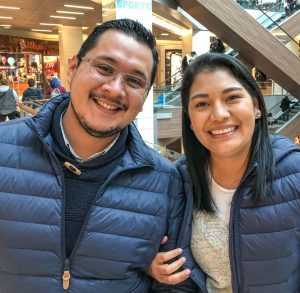 Nico Rodriguez and Alejandra Huezo at a Santiago shopping mall.

The country also has unusually high rates of depression, particularly in Santiago, according to the World Health Organization.

The Providencia church has benefited from the Venezuelans’ presence, Huezo says. “They have impacted the church with the way they confront difficulties.”

Often, “Chilean people cannot see how many blessings they have,” she says. “We, as foreign people, can see it.”