Refugees from Venezuela find new families of faith in Argentina. Melding two vibrant South American cultures can be a challenge, one church planter says. But the new arrivals 'can reach people we can't.'

“I had a revolver pointed at my face — twice,” says 18-year-old Hector Osorio.

“They took my sister and me and left us in a field,” says Mary Gómez, 26. “I was so scared. They drove off in my truck.” 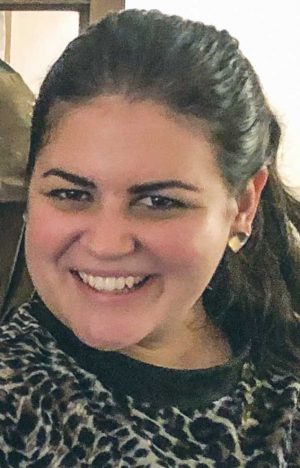 For each of these Venezuelans — now living in Argentina’s capital city, — the words come almost nonchalantly, like they’re describing a trip to the supermarket.

Related: Is socialism to blame?

That is, after all, the reality of daily life in Venezuela — a country in the midst of political turmoil and a collapsing economy. Crime rates are rising. Gangs are recruiting. And the supermarket shelves are bare.

Three thousand miles from their homeland, the Venezuelans gather to sing hymns and dine on tacos in the downtown Buenos Aires apartment of Jonathan Hanegan.

A Colorado native and former missionary to Venezuela, Hanegan and a multinational team of young Christians launched Iglesia de Cristo Redentor, the Redeemer Church of Christ, six years ago.

Members of the Iglesia de Cristo Redentor (Redeemer Church of Christ) in Buenos Aires, Argentina, sing the Spanish version of “Listen to our Hearts” during a Wednesday night devotional. The congregation has members from Argentina, Colombia, the US and a large number from Venezuela, forced to leave their homeland due to its deepening financial and political crisis. #christianchronicle #crisisvenezuela #venezuelacrisis #argentina🇦🇷 #churchofchrist #iglesiadecristo

“The initial idea was to start a church focused on the neighborhood here … not to have a church composed of mostly foreigners,” says Jairo Díaz, a native Argentine and member of the church-planting team.

That was unexpected, says Díaz, who trained for ministry at the Quito School of Biblical Studies in Ecuador. 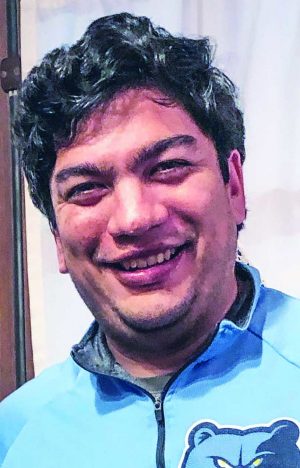 “When I left Ecuador, my goal was to work with a church that was mainly Argentine,” he says, “but God put me in a place where I’m still like a foreigner.”

His teammate, John Campos, acknowledges that mixing the gregarious, Caribbean culture of Venezuela with the reserved, intellectual vibe of Buenos Aires “creates a challenge as to local evangelism. For a lot of Argentines that aren’t Christians yet, it can be a barrier.”

At the same time, the Venezuelans have become integral to the young church, says Campos’ wife, Sabrina Nino, who also is a member of the church-planting team.

“I don’t know what we’d do without them,” she says. “They’re very close to God. I mean, they just want to do everything they can to help. They’re social. They can reach people we can’t.”

Sharing despite a crisis of their own

About 66 percent of Argentina’s 44 million souls claim Catholicism as their faith.

But many “have come to the point where it’s not convenient to believe in God,” says Jorge Mercado, who ministers for a Church of Christ in Pilar, a small town about an hour northwest of Buenos Aires. 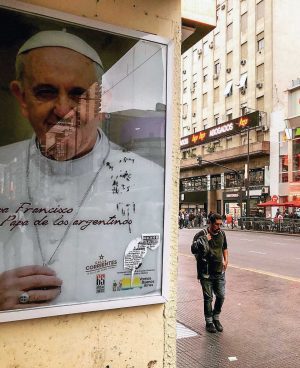 “If we knock doors or ask someone in the plaza if they want to talk about God, they say no,” Mercado says. “The way we draw close to people is through a distance, through the internet, or we leave Christian literature in their mailbox.”

About a year ago, Mercado was speaking to the congregation about “What is the Christian community? What is the importance of helping one another?”

Then Marlon Vivas arrived — with little more than the clothes on his back. In Venezuela, he had earned money by renting out small washing machines, strapping them to the back of his motorbike and delivering them from house to house.

But his clients could no longer afford his services. He left to scout out Argentina for a new life, but his wife and twin children were trapped at home when Venezuela closed its border. Ten months passed before they could leave. 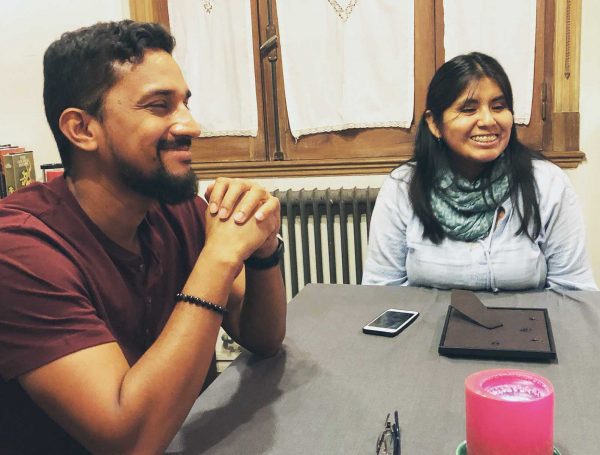 Jorge Mercado and Patricia Sancalli talk about the impact of one Venezuelan on the church they serve.

In the meantime, the Pilar Church of Christ adopted Vivas and gave him a place to stay. Church members helped him find work and a new home when his family arrived.

The church is by no means wealthy, says Mercado’s wife, Patricia Sancalli. Most members have trabajo precario, “precarious” or unsteady work. And Argentina is in the midst of its own inflation crisis, though not on the scale of Venezuela’s.

Some church members “can only eat pasta with butter,” Sancalli says, “but even in that state, they give some away.”

Vivas “is now one of the most fundamental people in the church,” she adds. He’s helped two people make the decision to be baptized. He works with the church’s youths.

“I feel deeply blessed,” Vivas writes in an email to The Christian Chronicle. From the Pilar church, “I’ve learned to be more organized, more methodical, to prepare better sermons. I thank the brothers … for giving me the opportunity to contribute a grain of sand.”

Not all of the experiences are as positive as the Pilar church’s. Some Venezuelans take advantage of churches’ hospitality and then disappear, “using the church to survive the crisis,” Jairo Díaz says.

Others have become part of the Buenos Aires team.

Corina Díaz, a native of Mérida, Venezuela, was studying medicine there but left after multiple teacher strikes shut down her school. Now she does clerical work for a carpentry shop in Buenos Aires and teaches yoga. 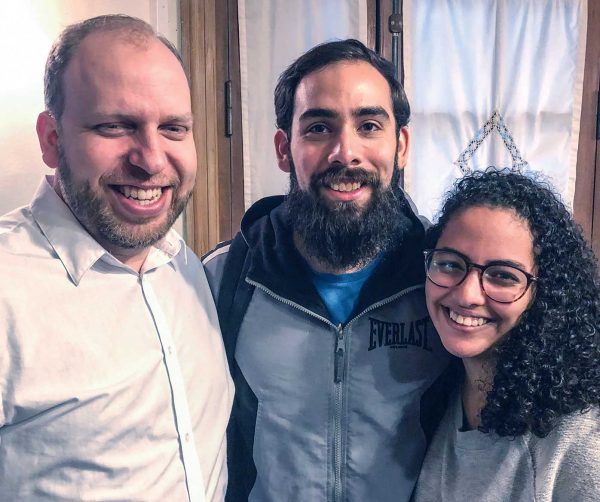 As part of the Redeemer Church of Christ, she helps new arrivals from Venezuela adjust to Argentine culture, find apartments and jobs. She helps with discipleship studies for women and teaches a kids’ class. She’s training for ministry online through Texas International Bible Institute.

“It’s incredible the way God works,” she says. “Many churches around the world are growing because of Venezuelans’ movements. I think that’s awesome.

“I don’t want to sound egocéntrica (self-centered), but I think our culture is to preach and to invite people and to go to their houses. We don’t care if people are able to receive us. We just care that people listen to what God wants.”

Hanegan, the former missionary to Venezuela, believes that the combination of cultures is beneficial for church growth. In Venezuela, Churches of Christ have zealous, mostly self-taught preachers who don’t have a lot of theological education, he says. Sometimes they can be dogmatic and legalistic.

In Argentina, “we’re really good at spiritual formation,” Hanegan says, “but we really miss the evangelism.”

When combined, Corina Díaz says, the ministry styles of the two nationalities can be “like an explosion. People can see God’s love, working together.”

‘For everything we receive here, we’ve gotta give’

After the Wednesday night devotional in Hanegan’s home, the recent arrivals from Venezuela say they can feel the church’s love. 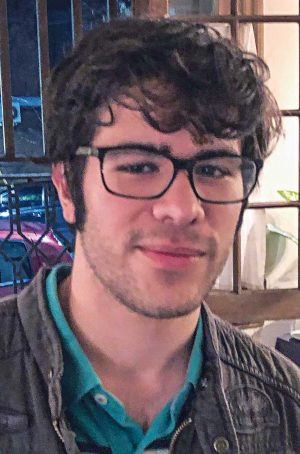 “I have been to several churches here. This is the one where I’m staying,” says Hector Osorio, the 18-year-old. “There’s so much unity.”

After enduring multiple robberies and the theft of his car, he now goes “bubble dancing” (his term for dish-washing) in Buenos Aires, working in multiple restaurants. A friend invited him to church.

Mary Gómez, who survived a kidnapping with her sister, found out about the church through her fiancé, Ranier López, who works as a driver for Uber.

Through an act of God’s providence, she believes, López gave a ride to Justin Simms, an intern for the church.

Gómez says she’s thankful for the help they’ve received since they came to Buenos Aires.

And she’s eager to repay the debt.

“So maybe the country’s falling apart,” she says of her homeland, “but we’re here. And for everything we receive here, we’ve gotta give.

“We have to be good people.” 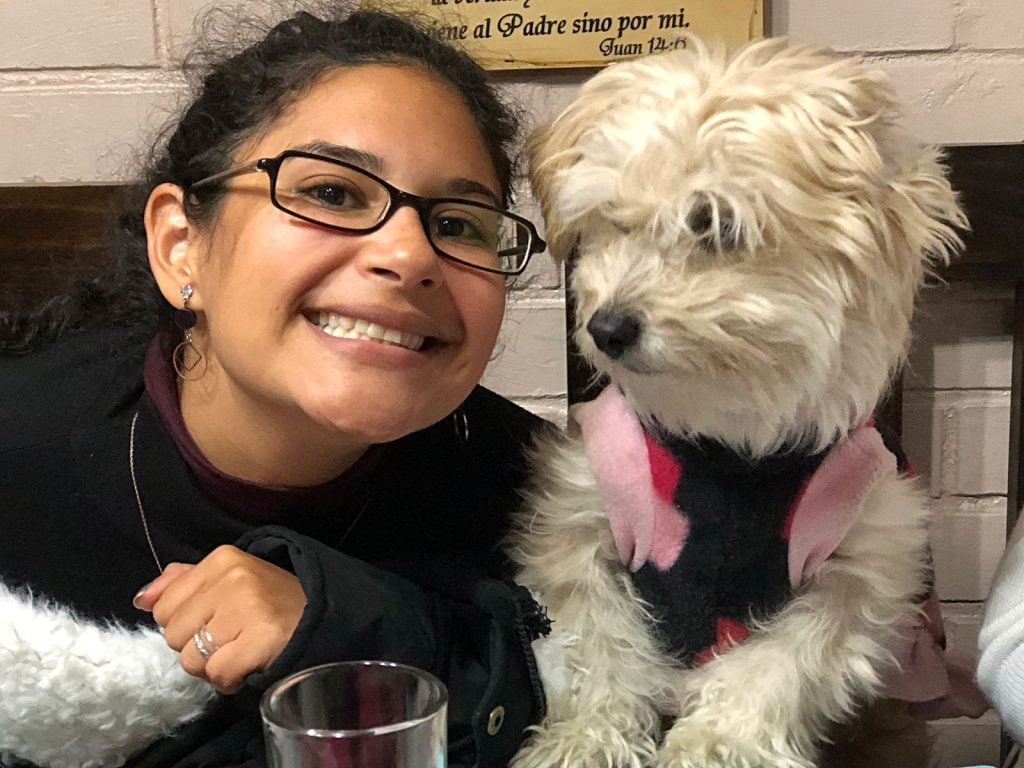 Warm hearts, warm dogs and a not-so-warm hug in Chile

SANTIAGO, Chile — Dogs in sweaters. I have never seen as…