Inside Story
Photo by Bernard Hermant on Unsplash
Print
Share:

As you may have heard, today marks Lynn McMillon’s official final day as president and CEO after 23 years of service to The Christian Chronicle.

As Digital News Editor Chellie Ison reported this week, our new president and CEO is a familiar face: Erik Tryggestad, who has reported from 72 countries and territories since joining the Chronicle staff in 2001.

For those who have appreciated Tryggestad’s international writing, the good news is this: He’s not going anywhere — except to cover more news around the globe. His byline will remain a mainstay in our pages, both in print and online. In fact, look soon for stories by Tryggestad from Chad and Sweden.

From Erik: In the African nation of Chad, we’re loading up for a 15-hour journey to a clinic and mission point operated by Hope Springs International. I’m traveling with members of Churches of Christ in the Nashville, Tenn., area. #hopesprings #medicalmission #churchofchrist #chad #africa

Meanwhile, I’m the Chronicle’s new editor-in-chief after serving from 2005 to 2012 as managing editor and since 2013 as chief correspondent.

I’ve been blessed to report from all 50 states and 13 nations in my time with the Chronicle (and I’m headed to Croatia in a few weeks). Even as I oversee our news and editorial operations, I’ll remain our lead writer on news involving the nearly 12,000 Churches of Christ in the U.S.

I posted a note on my Facebook page asking for feedback on what the Chronicle does well and what we could improve upon. I’d love to hear from you.

Reader Tim Herbel suggested that he’d like to see more religion news from outside our fellowship as a means to “help keep perspective.” This new column is one way that I hope to offer a wider perspective for readers, even as we focus on our core mission of informing, inspiring and uniting Churches of Christ. (As you scroll down each week, you’ll see a mixture of news from Churches of Christ and the broader world of religion.)

• Launched during segregation, National Lectureship celebrates 75 years: I traveled to St. Louis recently to report on this milestone event among primarily African American members of Churches of Christ. 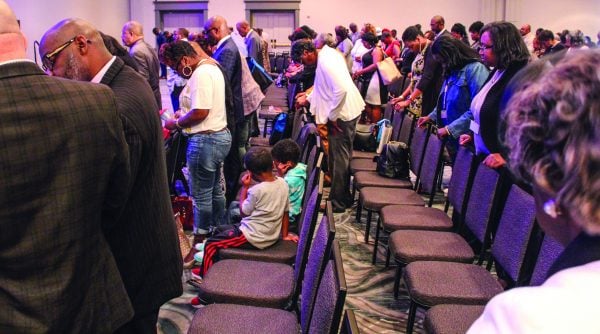 Members of Churches of Christ across the U.S. pray during the recent 75th National Lectureship, held at the Marriott St. Louis Grand Hotel.

• Churches of Christ in the Holy Land: This story by Tryggestad from Nazareth, Israel, appeared in our May print edition. It’s now online if you missed it.

• Burnette Chapel church shooter sentenced to life in prison: Emanuel Kidega Samson was sentenced this week to life in prison without the possibility of parole in the 2017 mass shooting at a Church of Christ in Tennessee, The Tennessean reports. Read some of the Chronicle’s in-depth coverage of the shooting here, here and here. 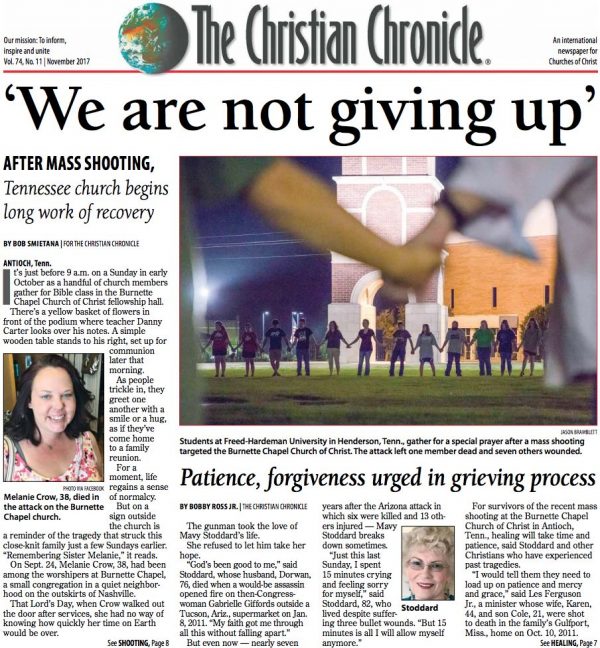 The gunman in the 2017 mass shooting at the Burnette Chapel Church of Christ in Antioch, Tenn., has been sentenced.

• Alabama executes man for Church of Christ’s minister slaying: Christopher Lee Price, 46, was put to death by lethal injection Thursday night in the 1991 killing of Bill Lynn, a Church of Christ minister in rural Fayette County, The Associated Press reports. Did any of our Chronicle readers know Lynn? We (thank you, Chellie Ison) checked our archives from around that time and didn’t find any mention of Lynn’s death.

• Evangelical financial watchdog faces scrutiny over backing of errant megachurch: If the byline on this one looks familiar, it’s a freelance piece that I wrote for Religion News Service. A quick search found one Church of Christ that is accredited by the Evangelical Council for Financial Accountability.

• Mayoral candidate is a Church of Christ member: As I noted on Twitter, Eric Johnson is one of the two candidates for the top elected post in Dallas, a city of 1.4 million people. He’s a member of the Mountain View Church of Christ in that Texas metropolis. (A Dallas Morning News profile of Johnson features a photo of him at the Dallas West Church of Christ, where he grew up.)

1. Texas state Rep. Eric Johnson (@Johnson4Dallas) — who will face Councilman Scott Griggs (@griggsfordallas) in the June 8 runoff to determine the next mayor of Dallas— is a member of the Mountain View Church of Christ in Dallas. https://t.co/bIkrMNpb2x @CofCnews pic.twitter.com/eeD1QnA8vw

• The role of prayer in Alex Trebek’s ‘mind-boggling’ recovery: Check out my GetReligion.org post exploring the faith angle in the longtime “Jeopardy” host’s battle to beat stage 4 pancreatic cancer.

• Major-leaguer Bill Buckner ‘is in the arms of his Lord and Savior Jesus Christ’: Buckner, who died this week at age 69, played 22 seasons with the Dodgers, Cubs, Red Sox and a few other teams.