ST. LOUIS — For 75 years, the National Lectureship of Churches of Christ has brought together Christians from across the U.S. for preaching, singing and fellowship.

Hundreds of members of predominantly African American congregations gathered at a hotel near St. Louis’ Gateway Arch for the recent milestone event. 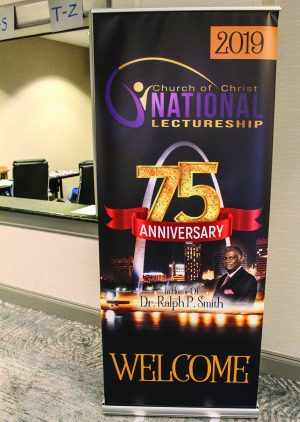 A poster at the welcome desk of the 75th National Lectureship pays tribute to Ralph P. Smith Sr.

“We want your spirits to be fed, your bodies to be comfortable, your fellowship to be delightful and your time here to have been worth the visit,” Conley Gibbs Jr., minister for the Gateway Community Church of Christ, said in welcoming believers to his home city along the Mississippi River.

Missouri Gov. Mike Parson sent a letter of greeting: “It appears attendees are set for a meaningful week of worship, prayer, and service centered on the redemptive power of faith. Efforts by the faith community are vital to the spiritual and physical needs of Missouri citizens.”

The mayor called the longtime preacher “an inspiration to us all.”

Gibbs said Smith “continues to encourage us to ‘endeavor to keep the unity of the spirit in the bond of peace’ by imploring us to love each other as Christ did, to forgive each other as is often necessary and to serve each other for the glory of God.”

For his part, Smith said, “I am humbled, honored and grateful to the National Lectureship Board of Directors and leadership who have bestowed recognition of my contribution to the kingdom down through the years.” 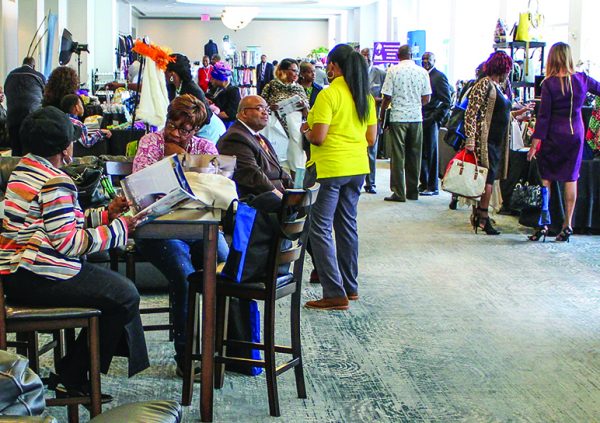 National Lectureship attendees and vendors visit during a break at the five-day event at the Marriott St. Louis Grand Hotel.

The late R.N. Hogan, minister for the Stonewall and Waco Street Church of Christ in Houston, first suggested the idea of a lectureship “similar to that of the white brethren,” according to a written history of the event.

Related: There’s a divide in the church: This minister wants to bridge it

“It was Hogan’s belief that a Lectureship would help synchronize both our teaching and preaching of New Testament doctrine, along with fostering a means of fellowship for those who would attend,” recounts the history. Prominent ministers Levi Kennedy Jr., J.S. Winston and G.E. Steward “each agreed with Hogan’s concept that such a Lectureship would serve a great need in our brotherhood.”

Among the original objectives, leaders wanted to “offer sound doctrinal teaching against liberalism, digression, and apostasy” and “encourage and strengthen the work of congregations in whose area the Lectureship would be held.” Over the past 75 years, numerous major cities — from Los Angeles to Chicago to New York — have hosted the lectureship. Orlando, Fla.-area congregations will organize it next year.

“I always do my vacation around this time so that I can enjoy it and be with the fellow saints,” said Angele (“Angel”) Marcelin, a member of the Kings Church of Christ in Brooklyn, N.Y.

“It’s good to see a new place,” added Marcelin, originally from the Caribbean island of St. Lucia. “I’ve never been to this part of the country, so I’m excited.” 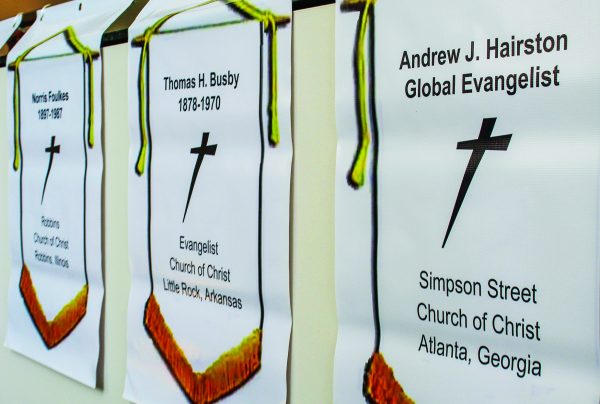 Banners hung along a wall by the hotel escalaator recognize past and present heroes of faith, including Atlanta minister Andrew J. Hairston.

According to the written history, the intention from the beginning was that:

• “The Lectureship is never to become an authoritative organization, having elected officers with delegated authority to legislate laws and rules to be bound on local congregations of the churches of Christ.” 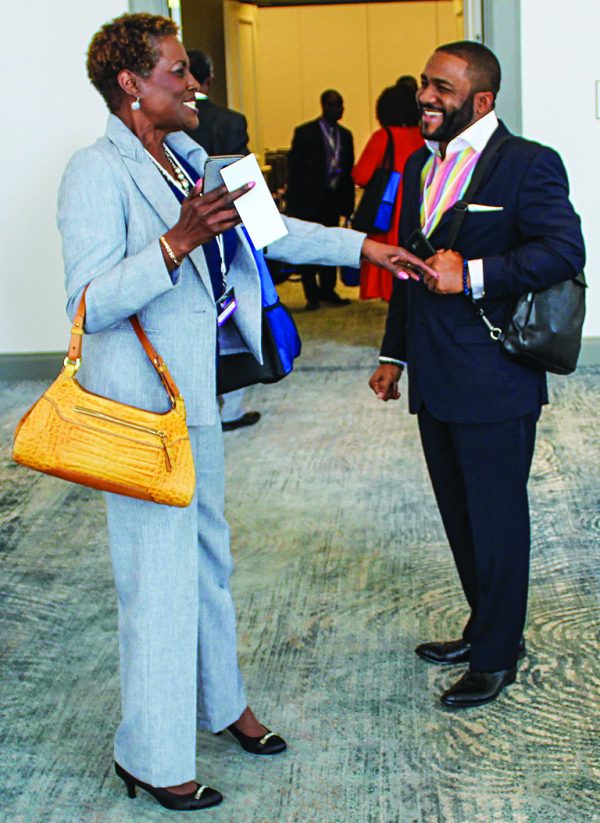 Genevia Jackson visits with Jonathan Morrison at the lectureship.

• “The Lectureship is never to become a delegated convention, with chosen men of local congregations who would have voice in policy-making decisions that would be binding upon churches. All local churches of Christ are autonomous in government and they are subject to Christ.”

LaTece Idleberg, whose husband, Otis, serves as an elder of the Greenville Avenue Church of Christ in Richardson, Texas, said she appreciates the long legacy of the National Lectureship.

It traces its history to a time when black and white congregations were segregated.

“It started during the Civil Rights Movement back when black churches — all they had was themselves, even though it’s one gospel, and it’s supposed to be for everyone.”

“It started during the Civil Rights Movement back when black churches — all they had was themselves, even though it’s one gospel, and it’s supposed to be for everyone,” Idleberg said during a break at the St. Louis gathering. “So to have something start and to have it continue for 75 years, it gives you a vision of the history. And it gives you energy to forge on, to branch out and to spread the Gospel. It’s like a renewal.”

Times have changed in a lot of ways, she noted: “Right now, we travel a lot on the road, and we can pull up Churches of Christ on our phone, and we just go, and it doesn’t matter if it’s predominantly white or predominantly black. We can walk in and feel welcome no matter where we are, and at Greenville, it’s the same way. We have people from all races come in and feel welcomed.” 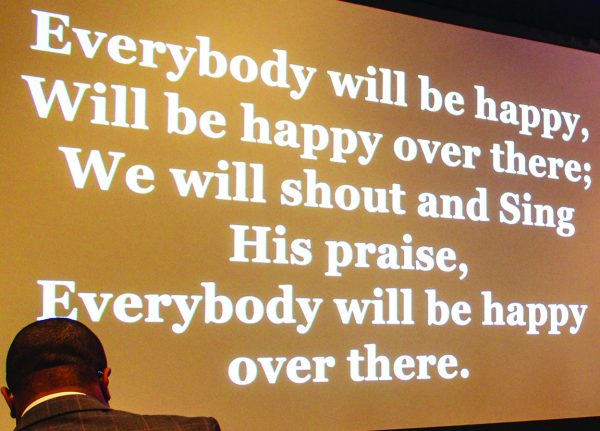 Christians sing “Everybody Will Be Happy Over There” during the 75th National Lectureship, hosted by St. Louis-area congregations.

Still, she treasures the history and purpose of the lectureship.

Mark Vaughn serves as minister for the Grant Street Church of Christ in Guthrie, Okla.

Vaughn said he enjoys seeing old friends from his time at Southwestern Christian College in Terrell, Texas — the only historically black higher education institution associated with Churches of Christ — at the annual event.

“I come because I want to get energized,” the 1985 Southwestern graduate said. “I preach every Sunday, so I want somebody to preach to me. I want to be fed. So I love to come.” 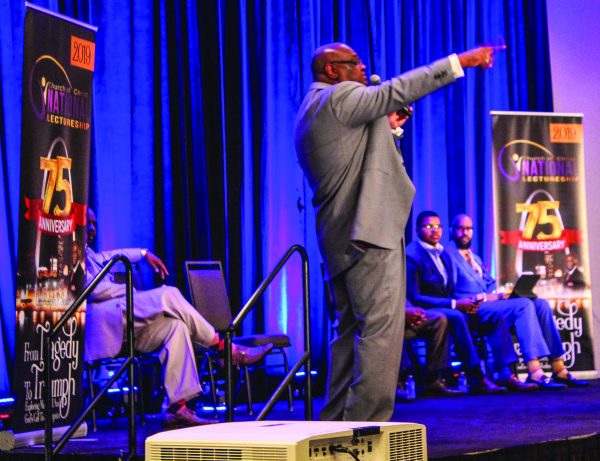 Jerry Houston makes a point at the National Lectureship.