'You don’t ever get over those things. You just learn how to get through them,' says a minister familiar with tragedy.

The gunman took the love of Mavy Stoddard’s life.

She refused to let him take her hope.

“God’s been good to me,” said Stoddard, whose husband, Dorwan, 76, died when a would-be assassin opened fire on U.S. Rep. Gabrielle Giffords outside a Tucson, Ariz., supermarket on Jan. 8, 2011. “My faith got me through all this without falling apart.” 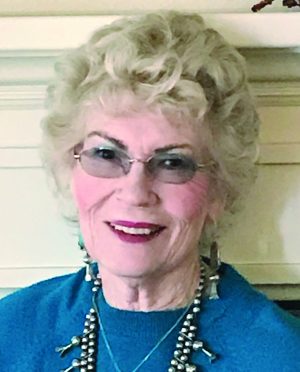 But even now — nearly seven years after the Arizona attack in which six were killed and 13 others injured — Mavy Stoddard breaks down sometimes.

“Just this last Sunday, I spent 15 minutes crying and feeling sorry for myself,” said Stoddard, 82, who lived despite suffering three bullet wounds. “But 15 minutes is all I will allow myself anymore.”

For survivors of the recent mass shooting at the Burnette Chapel Church of Christ in Antioch, Tenn., healing will take time and patience, said Stoddard and other Christians who have experienced past tragedies.

Melanie Crow, 38, was killed and seven other Burnette Chapel members wounded — including minister Joey Spann — when a masked gunman targeted the congregation Sept. 24.

To members’ shock, the man arrested by police — 25-year-old Emanuel K. Samson — was someone they knew.

Just a few years earlier, Samson had attended services at the Nashville-area congregation and even helped with Vacation Bible School. The shooter’s motive remains unclear.

“They’re just going to have to slow down and realize that all the answers aren’t going to come quickly,” said Ferguson, now the preacher for the Lake Harbour Drive Church of Christ in Ridgeland, Miss. “This is a process, and it may be a long, drawn-out process. There’s nothing that’s going to fix it.” 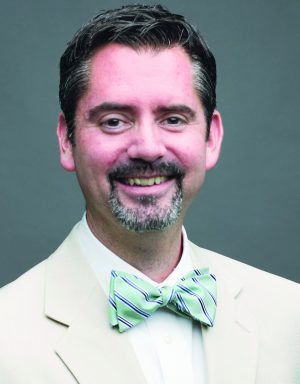 Jeremy Weekley preached for the Fourth Street Church of Christ in Selmer, Tenn., after the former minister’s wife, Mary Winkler, fatally shot her husband, Matthew, with a 12-gauge shotgun on March 22, 2006.

“I went in, and the healing process is just like it is for any kind of tragedy or any time you lose a loved one. It takes a while,” said Weekley, who served the Fourth Street congregation for nearly a decade. “You don’t ever get over those things. You just learn how to get through them.

“The leadership there basically told the congregation, ‘It’s OK to feel however you feel, but our No. 1 priority is to serve the Lord,’” added Weekley, now the pulpit minister for the West End Church of Christ in Knoxville, Tenn. “So the focus was never really on the tragedy that had happened. Their focus was on just taking care of the flock.”

Hardest thing she ever had to do

Dorwan Stoddard — “Dory” to his friends — was a faithful member of the Mountain Avenue Church of Christ in Tucson. 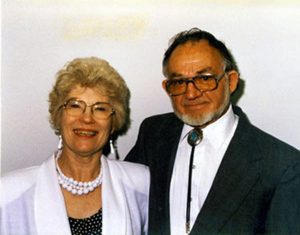 He took charge of maintaining the church building and leading the benevolence ministry with his wife.

As former President Barack Obama told the nation in 2011, Dorwan Stoddard’s “final act of selflessness was to dive on top of his wife, sacrificing his life for hers.” As he tried to protect her, he was shot in the head, witnesses said.

The two married later in life after losing previous spouses.

“Dory and I had an absolutely perfect — if there is such a thing — marriage. We did have a 15-year honeymoon,” said Mavy Stoddard, who moved to Idaho to be closer to a daughter and attends the Linder Road Church of Christ in Meridian, west of Boise. “He loved the Lord as much as I did. We did everything together. We traveled all over the Western world.” 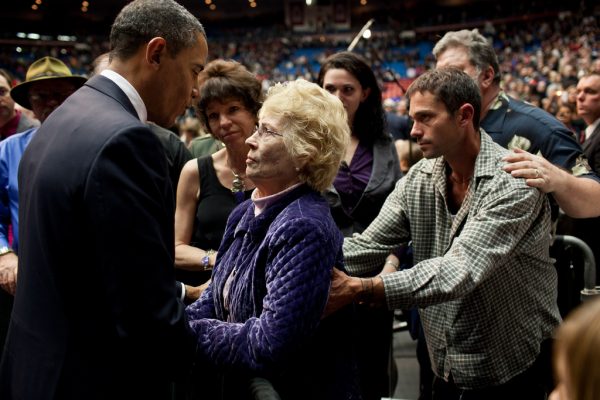 Jared Lee Loughner, described by authorities as a mentally unstable college dropout, avoided the death penalty by pleading guilty to the Arizona mass shooting in 2012. He’ll spend the rest of his life in prison.

After a year of praying, Mavy Stoddard said, she forgave Loughner.

“It was the hardest thing I had ever done, but I forgave him,” she said.

But later, she realized she had forgiven the act but not the man.

“One day sitting in church here, the minister mentioned hate,” Mavy Stoddard said. “And I thought, ‘You still hate that young man.’ … For me, after all those years, I fell apart. It took a while, you know, but you do have to forgive the person as well as the act.

“That’s the question a lot of people asked: ‘How?’” she added. “And I told them, ‘God doesn’t forgive you unless you can forgive your fellow man.’” 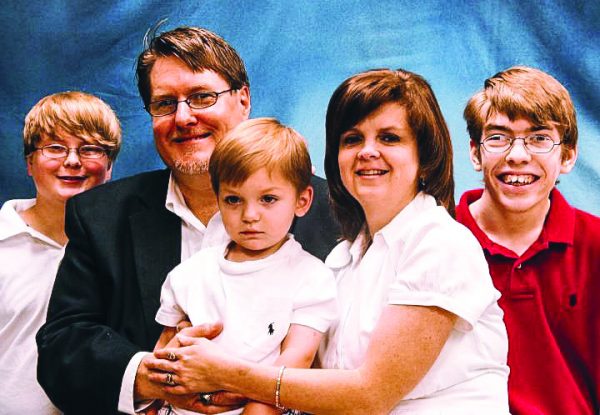 Les and Karen Ferguson, with Conner, Casey and Cole. Not pictured is the couple’s oldest son, Kyle. (PHOTO PROVIDED BY LES FERGUSON JR.)

In Les Ferguson Jr.’s case, he has struggled with forgiving a killer — Paul Ellis Buckman — who died of a self-inflicted gunshot wound.

Buckman, 70, had attended the Orange Grove Church of Christ, where Les Ferguson Jr. preached, until he was charged three months earlier with sexually assaulting Cole Ferguson, who had cerebral palsy.

“Forgiveness will come easier for some folks,” the minister said. “For some folks, kind of like me, it will be an ongoing battle. (Oct. 10) was the sixth anniversary of our tragedy, and I found myself having to forgive the guy all over again.” 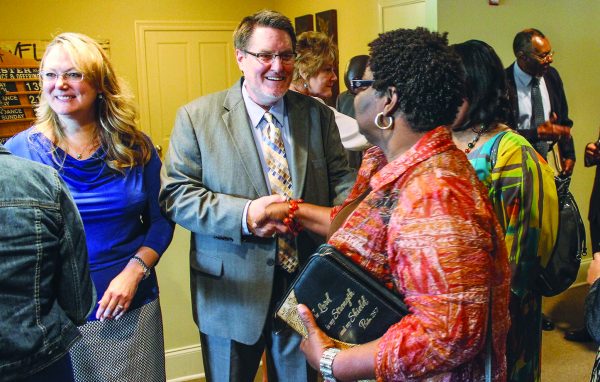 Minister Les Ferguson Jr. shakes hands with member Vicki Bingham at the Lake Harbour Drive Church of Christ. At left is Becki Ferguson, whom the preacher married in 2012. (PHOTO BY BOBBY ROSS JR.)

Ferguson has penned a book titled “Still Wrestling: Faith Renewed Through Brokenness,” which will be released April 10, 2018, by Abilene Christian University’s Leafwood Publishers.

“I wrote it to take my bad junk and turn it into something positive and useful for others.”

“It was a catharsis for me,” Ferguson said of writing about his excruciating journey. “It let me pull out some of my own anger and frustrations and tell my story in a format that initially I was the only one looking at. So I could process it, and it could be as raw as it needed to be for the moment.

“I wrote it to take my bad junk and turn it into something positive and useful for others,” he added. “Nobody else may have my exact tragedy. But there’s a lot of people out there who are broken and hurting and questioning God and wondering where to go next and what to do with it all.”

See what God can do

In the Selmer case, Mary Winkler was convicted of voluntary manslaughter and served a short time behind bars. 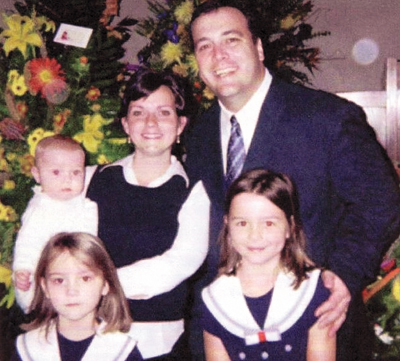 She eventually regained custody of the couple’s three daughters.

The Fourth Street church, meanwhile, moved forward as the story of the preacher’s family played out on television and in the tabloids.

“What I usually tell people is this: I had a front-row seat to see what God can do even in the midst of tragedy,” Weekley said. “God is going to take care of the church … regardless of how bad the circumstances may be. And if you trust him, he’s going to lead you through it. 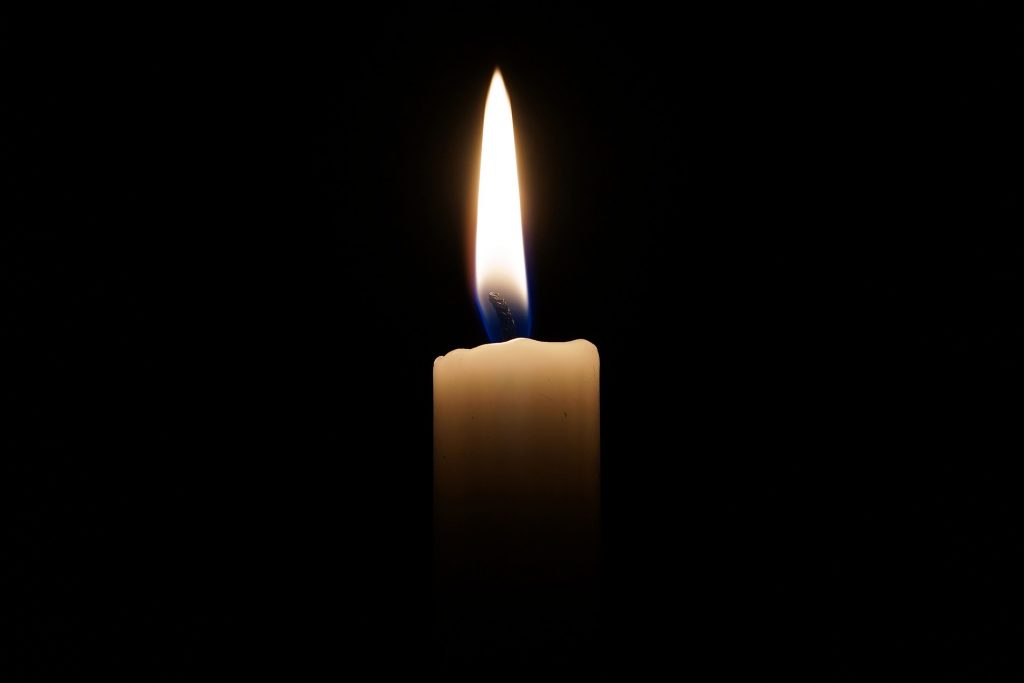 SELMER, Tenn. — On the Sunday after members found minister…