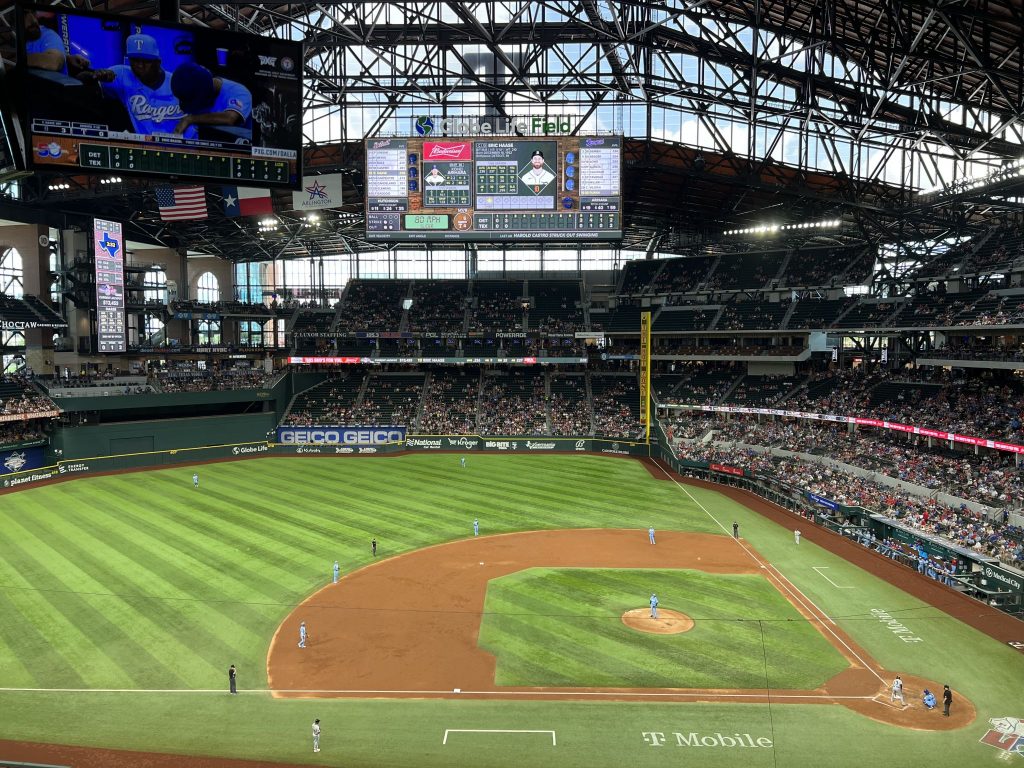 A heavenly day at the ballpark

While interning with the MacArthur Park Church of Christ in San Antonio in 2012, my oldest son, Brady, then a ministry major at Oklahoma Christian University, wrote a 91-page summer devotional guide for teens.

Related: For love of God, family and baseball

I still chuckle at the intro to his devo No. 60 on listening to God: “Don’t you hate it when you’re talking to someone, and you can tell they’re not listening? Some people are just naturally bad about this. It took me 18 years, but I learned to never ask my dad anything while the Rangers are on because he gets twice as into them as I do. Yes, that is actually possible.”

Suffice it to say that even before the most amazing thing happened (seriously, stay tuned for an incredible story!), I was excited about my 15-month-old granddaughter’s first Rangers game.

Brady and his wife, Mary, who live in the Oklahoma City area, were going on a minivacation to Dallas-Fort Worth. They invited me to join them and my grandchildren — Bennett, 4, and his toddler sister, Norah — at Sunday afternoon’s game between the Rangers and the Detroit Tigers. 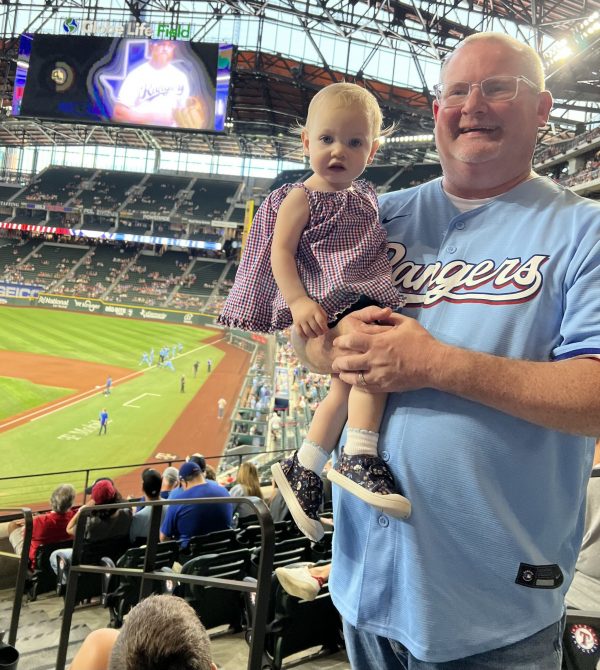 My wife, Tamie, who battles autoimmune diseases and did not feel like making the trip, made Norah a special outfit for the occasion: a red, white and blue swing top (the Rangers’ colors) with ruffle trim, spaghetti straps and navy bloomers to match.

I drove down from Oklahoma the night before the game and spent time with my parents, then joined my sister, Christy Fichter, for worship Sunday morning at the Legacy Church of Christ, her home congregation in the Fort Worth suburb of North Richland Hills.

After worship, I headed to Globe Life Field about 20 to 25 minutes away. The Rangers’ new air-conditioned ballpark in Arlington opened in 2020.

I was already seated and enjoying a hot dog, nachos and Diet Coke when my son, daughter-in-law and grandchildren arrived.

We had upper-level seats along the first-base line. They were not the best seats in the ballpark. However, seeing wide-eyed Norah bounce up and down in our laps and take in the ballpark experience for the first time made me forget how far we were from the field itself.

But then we got an upgrade. 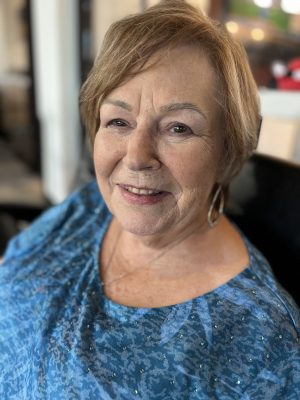 Here’s how it happened: I noticed Brady talking to a woman I didn’t recognize. I figured he knew her somehow. But after a few minutes, he came to me and asked if I wanted to watch the game from behind home plate.

He explained that the woman — Joyce Godwin — had spotted us with her binoculars and wanted to offer us better seats. She gave us lower-level tickets and $100 each for us to “have a good time at the game.” (I suddenly felt less guilty about the $30 I spent for the aforementioned ballpark lunch.)

We took an elevator down to the new seats. They were spectacular. We watched the first few innings from there. I was so giddy I hardly noticed the scoreboard (the Tigers jumped out to a big, early lead).

But then Joyce texted Brady and asked if we’d like to change seats again. Some people didn’t show up to watch the game in her luxury suite.

So we headed up to the suite. We found cushioned seats and free food (hot dogs, popcorn, cookies, brownies and more). 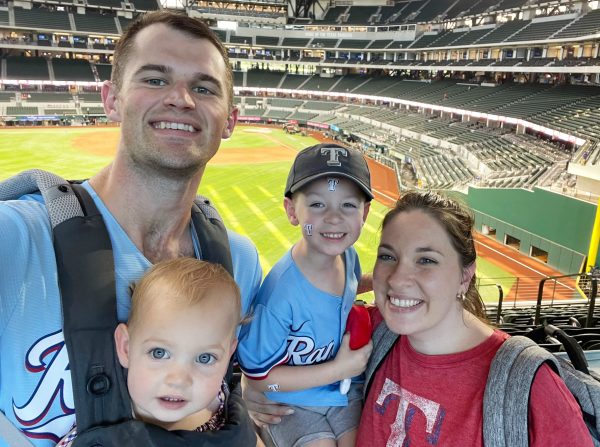 Already pretty full, I forced myself to eat Cracker Jacks on a white plate. I almost accepted a free ice cream sundae in a Rangers hat. However, my stomach protested.

During the game, I got to talk to Joyce about our shared experiences in journalism (she is starting a community magazine in Melissa, Texas, north of Dallas).

As for her ballpark benevolence, she explained that she’s part of an effort, funded by anonymous donors, to provide great Rangers game experiences for veterans, active-duty military, first responders, children’s charities and more.

On this Sunday, my family was blessed to fall into the “more” category.

Reporter that I am, I researched Joyce a bit when I got home. I discovered a common connection between her and Melany Ethridge, a senior account executive with A. Larry Ross Communications in Dallas. That public relations firm works with faith-based clients, so I know Melany from my newspaper work.

“This is an amazing ministry for her,” Melany told me, noting that Godwin is a longtime member of the First Baptist Church in Van Alstyne, Texas, where she is “almost like a second mom/grandma” to Griff Servati, the church’s pastor of connections, care and communication.

Griff told me: “Joyce is a special person who always cares about others, and whatever is within her power to help, she will. My girls have been blessed to have her in their lives and are so much better because of it.”

The giveaways started when Joyce worked for a newspaper in Prosper, Texas, the pastor said. She connected with first responders and had a friend with extra Rangers tickets. That gave her the idea of rewarding those who serve. 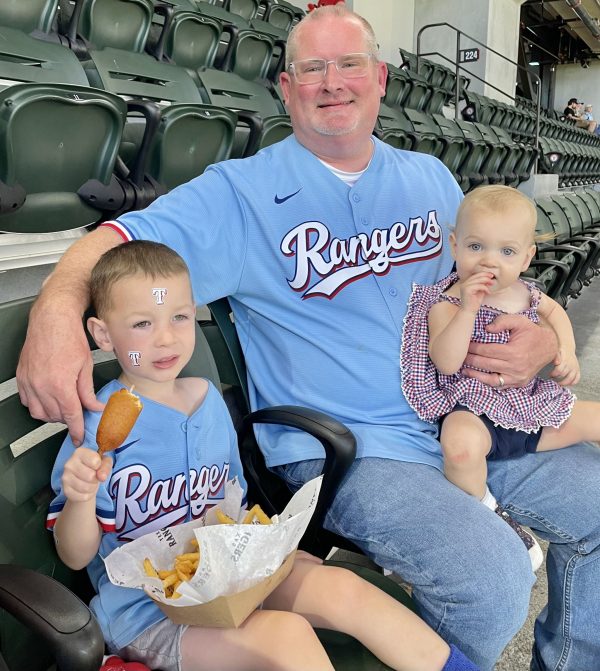 Bobby Ross Jr. with his grandchildren, Bennett and Norah, at the game.

“We actually got to have the suite experience with Joyce a couple of years ago with my dad,” Melany said. “She just has a heart for serving that community and sharing the love of baseball and enjoying a good time together with those who might not otherwise get to have such an experience.”

Related: Take me out to the ballgame

What a wonderful day at the ballpark she provided for my family (despite the Rangers’ 9-8 loss)!

My 15-month-old granddaughter won’t remember it, but the rest of us won’t ever forget it. 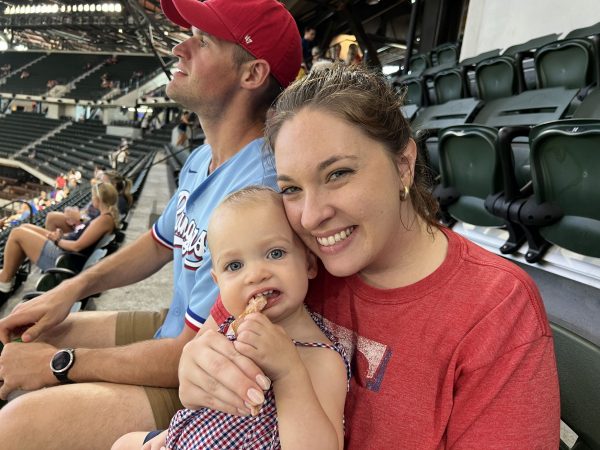 Norah Ross, with her parents, Brady and Mary. 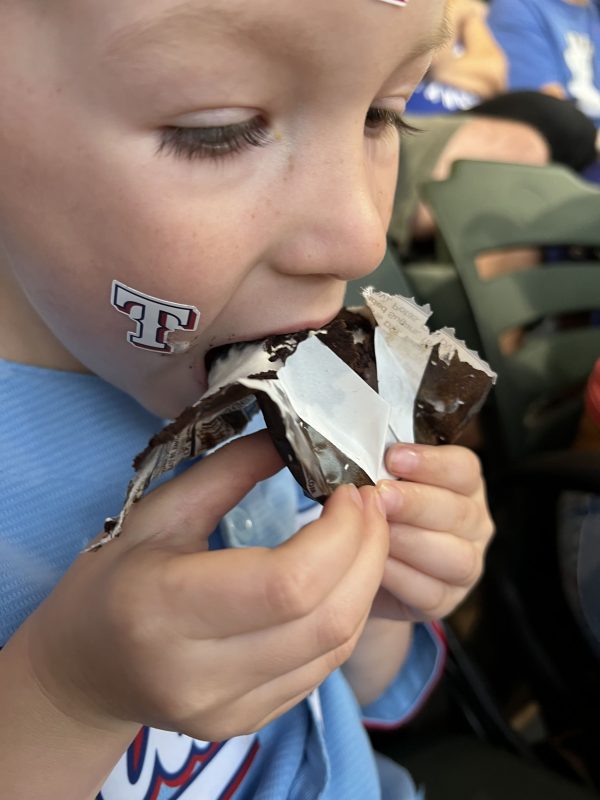 Bennett Ross, 4, enjoys an ice cream sandwich at the game. 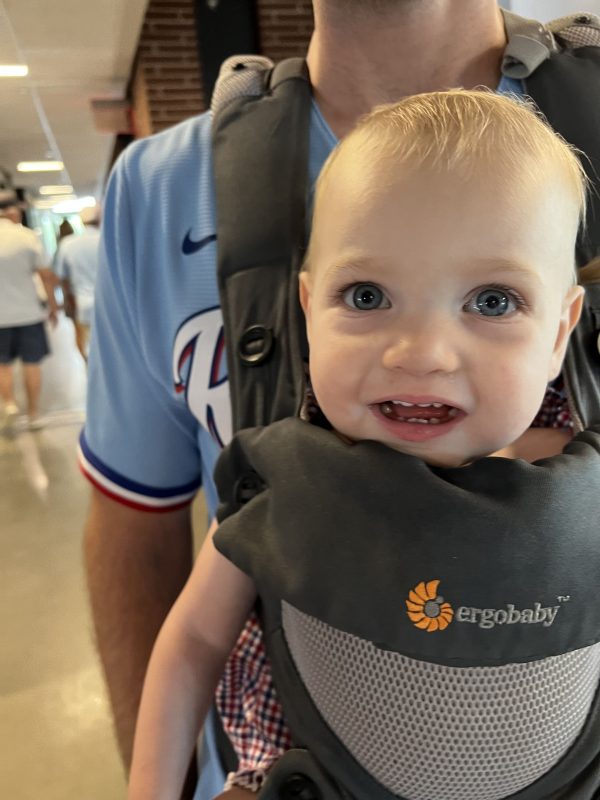 Norah Ross, held by her father, Brady, is still in a good mood when it’s time to go home from the game.