Josh and Ginger Willingham lead a program to feed hungry children in their Alabama hometown.

FLORENCE, Ala. — Josh Willingham stayed up most of the night praying.

After going to the World Series with the Kansas City Royals in 2014, the 35-year-old slugger had a decision to make.

The 11-year major-league veteran could play another season and hope to avoid the nagging injuries that had required multiple surgeries.

Or the free-agent left fielder could choose not to sign another contract. He could become a full-time father to his three young sons and start the next chapter in his life. 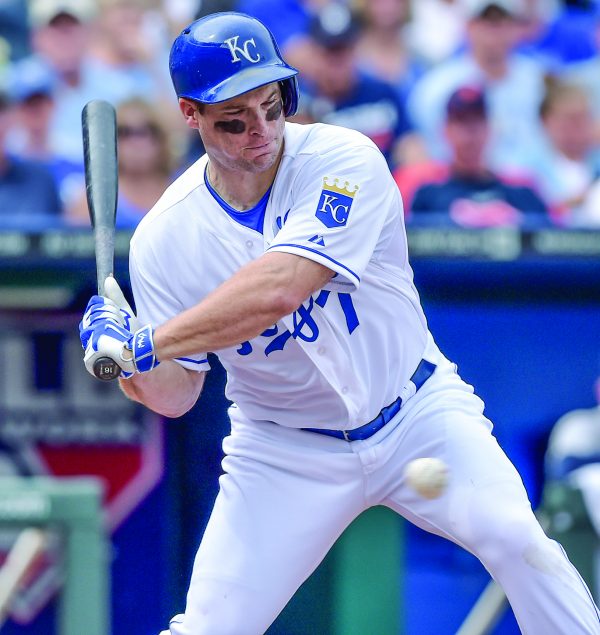 “I am a family-oriented guy, and my kids were getting older,” said Willingham, who with his wife, Ginger, shared the family’s story at Mars Hill Bible School, the couple’s alma mater. “And I was missing a lot of their lives.”

Josh told his agent that if he got an offer from the Atlanta Braves or St. Louis Cardinals — the teams closest to his northwest Alabama home — he’d consider it.

“As it turns out, I did get those offers,” he recalled during a benefit dinner held before the coronavirus pandemic forced social distancing.

Listen to the full interview:

The night before he had to decide, fellow Christians met at Josh’s house and joined the Florence native in seeking God’s direction.

“I can remember we were all praying about it,” he said. “I just really struggled with the decision. But my only prayer was, ‘Lord, I just want to be 100 percent (certain) and have no regrets.’

“And I haven’t. It’s been a good time,” added Josh, who ended his career with 195 home runs, 632 RBIs and an .823 on-base plus slugging percentage. “I’m still involved with baseball, just in a different way — teaching little youngsters.”

Faith was instilled early in the lives of Josh and Ginger.

Each attended Mars Hill Bible School, which is associated with Churches of Christ, from kindergarten through 12th grade.

The school’s roots can be traced back nearly 150 years. T.B. Larimore, a Restoration Movement church leader, operated Mars Hill Academy from 1871 to 1887. A group of Christians reopened Mars Hill at the same location in 1947.

Before we left Mars Hill Bible School today, ⁦@MarsHillPres⁩ took us to see the old Mars Hill church building for which James A. Harding raised money in memory of T. B. Larimore back in the early 1900s. pic.twitter.com/c4PAhkaFwM

“I love that I got to learn about Jesus every day,” said Josh, now 41. “I don’t think I truly appreciated what this place did for me until after I was finished and went off into the real world.

“All these values you learn when you come here when you’re 6 years old, they come to fruition, and you can use them,” added Josh, who was baptized at age 12 after returning home from a youth rally.

“I love that I got to learn about Jesus every day. I don’t think I truly appreciated what this place did for me until after I was finished and went off into the real world.”

Ginger, 39, said her parents, Wayne and Ann Jaynes, sacrificed so their children could attend Mars Hill.

“I don’t think there was a house payment or a car payment that would have ever gotten in the way of sending us here,” she said.

Even as a boy, Josh could hit a baseball a mile, said Clifford Miles, 85, a former elder of the Cross Point Church of Christ, where the future major-leaguer was raised.

But Josh’s athletic prowess wasn’t all that stood out.

“I coached Josh when he was 13, 14,” Miles said. “He’s always been a great athlete. I guess the best thing I could say about Josh is his Christian character — he’s always had it.”

Miles chuckled as he recalled one game. Josh, then 14, came to bat with his team down, 2-0, and the bases loaded. Coaching third base, Miles heard somebody in the opposing dugout suggest walking the big kid.

Friends all their lives, Josh and Ginger didn’t date until college.

He played baseball for the University of North Alabama, where he tied or broke 14 school records and was a two-time All-American.

“One thing that I always knew is that I wanted to marry a good Christian girl,” Josh said. “I knew her family background and how she was brought up.

“I can remember the day that sealed the deal, though,” he added. “She pulled up in her daddy’s red truck, and I thought, ‘You know what? I think this is a girl I can date.’” 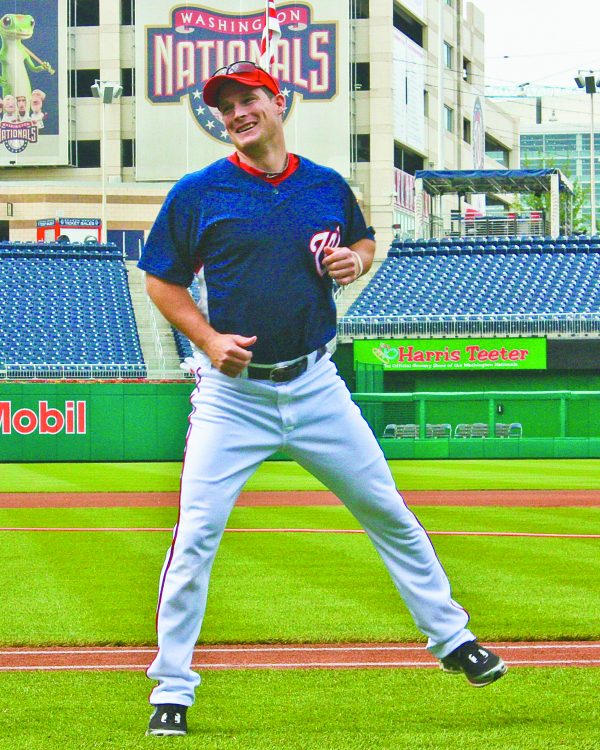 Josh Willingham of the Washington Nationals warms up before a 2010 game in the nation’s capital.

On the road again

Baseball kept Josh and Ginger, who married in 2002, on the move.

A 17th-round draft pick by the Florida Marlins in 2000, Josh played for six minor-league teams. He enjoyed two late-season MLB call-ups before becoming a Marlins regular in 2006. Trades later sent him to the Washington Nationals and the Oakland Athletics.

In 2012, he had his best season after signing a three-year, $21 million free-agent contract with the Minnesota Twins. He hit 35 home runs with 110 RBIs and an .890 on-base plus slugging percentage. He and two other American League outfielders — Josh Hamilton and Mike Trout — received the Silver Slugger Award.

In August 2014, with Josh’s contract expiring at the end of the season, the last-place Twins sent him to the playoff-contending Royals. His pinch-hit single in the ninth inning of Kansas City’s wildcard playoff game proved crucial in the team advancing to win the American League pennant.

“I hope that in my career I affected a lot of people in a positive way towards Jesus.”

Life away from their Alabama hometown, where the Willinghams kept their offseason home, both challenged the couple’s faith and strengthened it.

After going to church all his life and attending a Christian school, Josh said, his faith became his own.

“I really started to grow up,” he said. “I hope that in my career I affected a lot of people in a positive way towards Jesus.”

Ginger said: “It was great getting to know the wives. It gave me an opportunity to have Bible studies.” 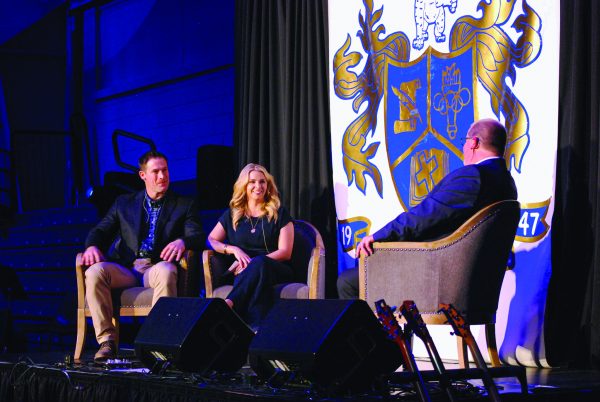 Josh and Ginger Willingham discuss life after baseball in an interview with The Christian Chronicle’s Bobby Ross Jr. at Mars Hill Bible School.

For so many years, Josh had one job: baseball player.

Now he’s the campus minister for the 325-member Stony Point Church of Christ, where Ginger grew up.

“That’s one of his many jobs,” pulpit minister Brad Adcock said. “He’s just doing a great job. We’re grateful to have him here.” 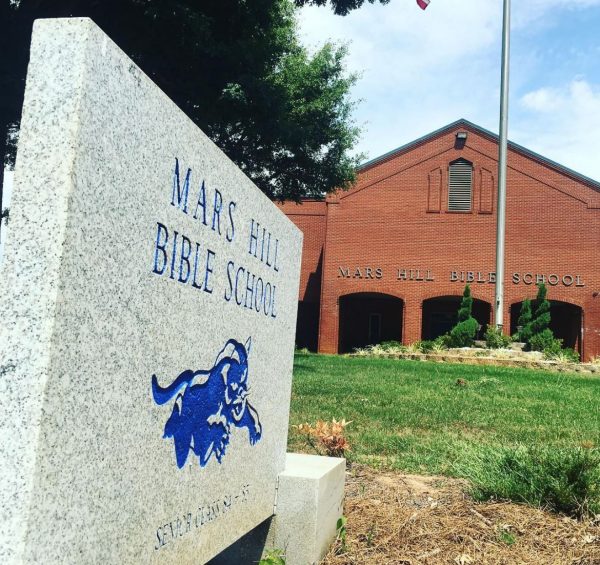 And he does charity work through the Josh Willingham Foundation. The nonprofit got its start when the Willinghams organized a benefit golf tournament named in honor of Josh’s younger brother, Jon Willingham, who died in a 2009 car accident at age 27.

The foundation’s flagship program — Isaiah’s Call — feeds needy public school students in Florence and neighboring communities. The program’s name stems from Isaiah 58, which refers to sharing food with the hungry.

“We started talking to counselors and teachers of schools in the area,” said Ginger, the foundation’s president. “We found out there were children who were eating all week at school — free lunch and free breakfast — and then they would go home and not have anything.”

Isaiah’s Call fills backpacks with enough food to feed a family of four for the weekend. The program started by sending home backpacks with seven students. That number has grown to more than 250 students each week.

“It’s one of those things where God is just providing,” Josh said. “The goal is that he is seen through our ministry. We put a lot of things — not just food — but a lot of notes and Bible studies in the backpacks.

“And that’s our ultimate goal,” he added. “We do want to make life more comfortable for these kids and these families, but we also want them to see Jesus through what we do.”

Congratulations to MHBS mom, alumna, and golf coach Ginger Willingham! Today she was named the Shoals Woman of the Year. Ginger, thank you for the difference you are making in our community. pic.twitter.com/bJLRZh2ehs

Ginger’s work with Isaiah’s Call earned her recognition as 2019 Shoals Woman of the Year, an areawide honor presented by the Times Daily, the local newspaper.

“Josh and Ginger are genuine. They are godly, down-to-earth people who use their God-given talents to bless the lives of everyone around them.”

“Josh and Ginger are genuine,” said Nathan Guy, president of Mars Hill Bible School, which has 450 students. “They are godly, down-to-earth people who use their God-given talents to bless the lives of everyone around them. They are hospitable and generous and view all of life as a ministry. To know them is to love them.”

Isaiah’s Call depends on volunteers — be they church members or retired teachers — to keep its shelves full of food, Ginger said.

“That’s one of the things that I love about Mars Hill that’s different from other places,” said Ginger, a substitute teacher, golf coach and former PTO president at the school. “It’s that our kids can load up on a school bus and go serve. 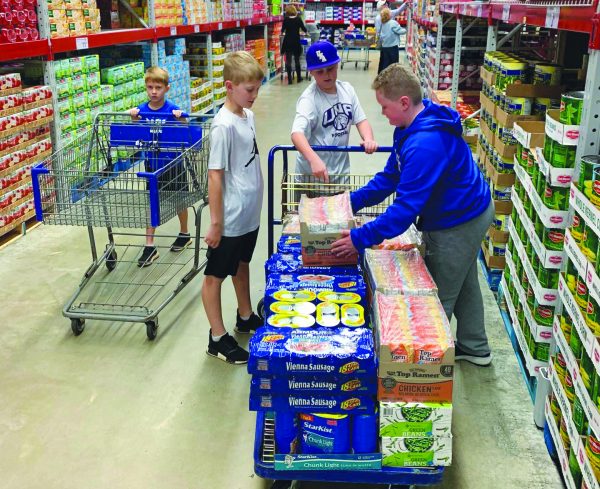 “They’ve had an opportunity to come to our building and learn about (Isaiah’s Call) and serve, and they’ve done that with our organizations, too,” she added. “You can’t put a price on that as far as our children getting to learn and serve.”

Mars Hill didn’t have a football program when Josh was a student, but he welcomes the opportunity to work with the team.

“I always like to help somebody along through life and make it easier to do what I learned,” he said. “And hopefully, I can be an inspiration to them.”

Score it a home run.