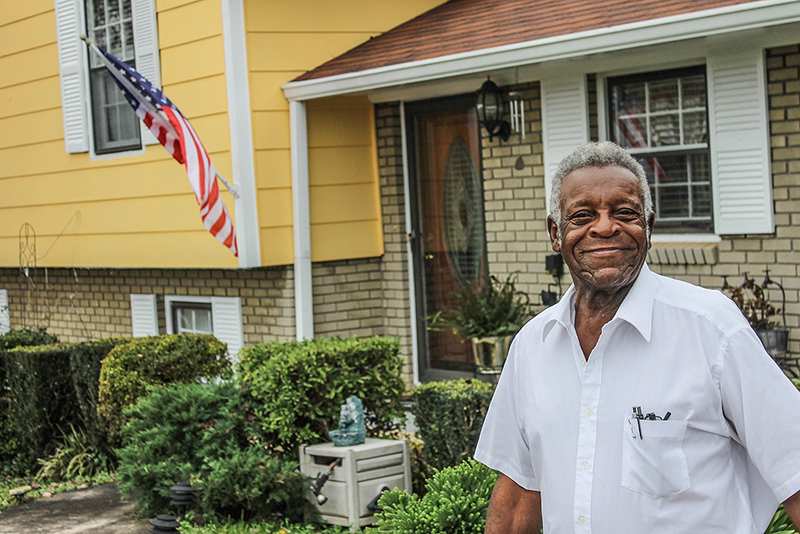 Why a Georgia church elder is making news at U.S. Supreme Court

In a death-row murder case, all the potential black jurors — including Eddie Hood — were excluded.

Hood, 75, serves as an elder for the 125-member Callahan Street Church of Christ in this northwest Georgia city of 36,000.

He worked for a paper mill for 33 years, but now he’s enjoying retirement.

“Working in the Lord’s church,” the grandfather of eight said of how he spends his time.

I showed up at Hood’s house — painted bright yellow with a U.S. flag flying by the front door — after seeing his name in national news reports.

Hood, it turns out, was as surprised as anybody when he ended up in arguments before the U.S. Supreme Court.

Some background: In 1987, Hood was a potential juror for a capital murder case in which Timothy Tyrone Foster, an 18-year-old black man, was charged with killing Queen Madge White, a 79-year-old white woman.

However, prosecutors used challenges to remove all four prospective black jurors — including Hood.

More than a quarter-century later, Foster’s attorneys seek a new trial on the basis of “purposeful discrimination by the prosecution in securing an all-white jury.”

In the penalty phase, prosecutor Stephen Lanier urged the jury to sentence Foster to death to deter other people “out there in the projects.”

The nation’s high court heard arguments in the case in November — and Hood figured prominently.

According to the defense, prosecutors first claimed they objected to Hood because he had a son about the same age as the suspect.

However, the jury included two whites with sons in the same age range.

Later, prosecutors blamed the strike on “Hood’s affiliation with the Church of Christ.” The church, they claimed, “definitely takes a stand against the death penalty.” But the district attorney’s own notes acknowledge the church leaves the issue to individual members, the defense responded.

For his part, Hood said he didn’t dwell on being excluded.

“Being in the Lord’s church, I don’t take something and build it in my mind to have any animosity,” he said. “But when I came home, I told my wife (Elnora), ‘More than likely, they’re not going to want too many of ‘us’ on the jury.’”

By “us,” he meant people of color.

Given the decades that have passed, Hood couldn’t recall if the district attorney quizzed him on his religion.

But when I asked if he had a problem with the death penalty, he quickly replied, “Oh, no.”

When Foster was convicted, Hood heard about it. However, he didn’t realize an all-white jury had rendered the decision. He figured a few blacks had remained on the jury. 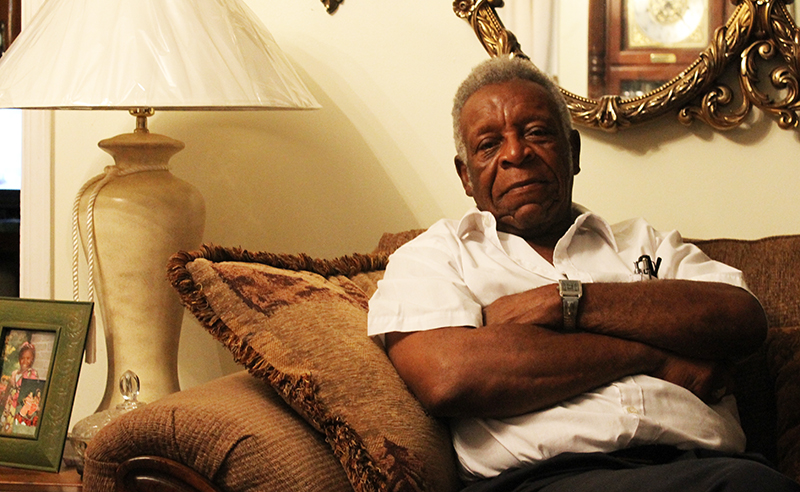 Eddie Hood visits with The Christian Chronicle at his home in Rome, Ga., (PHOTO BY BOBBY ROSS JR.)But before the recent hearing, Foster’s attorneys contacted Hood.

Then the media — including a reporter and a photographer from The Associated Press — came calling.

Before long, friends at the library were teasing Hood about being on the front page of the newspaper. And he couldn’t believe his eyes when the headlines scrolling across his television included his own name.

Hood grew up in the Jim Crow era of segregation, so racial issues are not new to him.

In his hometown of Cave Springs, Ala., blacks had to go in the back door of the café. As a teen, he was bussed 16 miles each way to an all-black high school. At the movie theater, blacks sat in the balcony, while whites had seats down front. 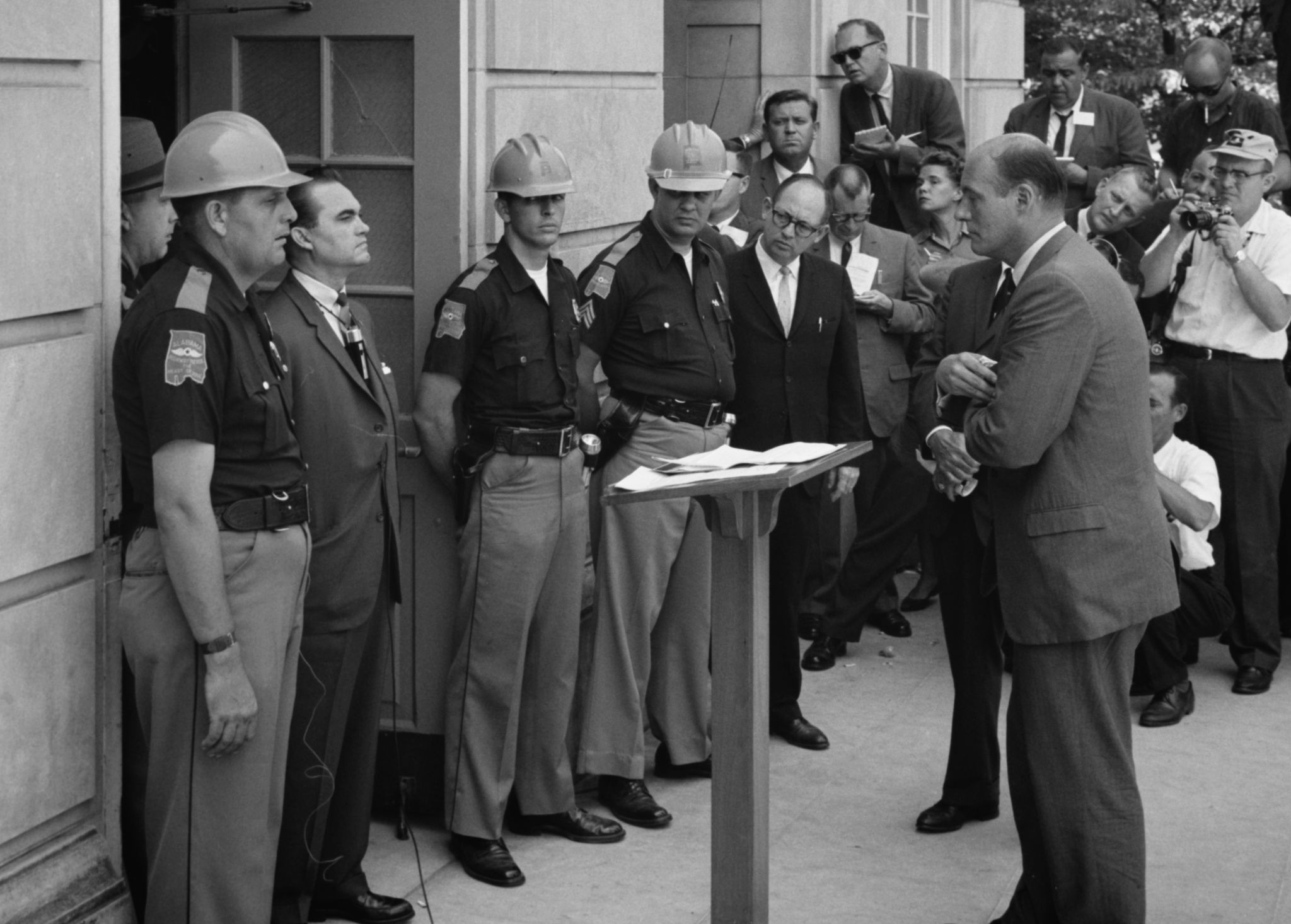 Attempting to block integration at the University of Alabama, Governor George Wallace stands defiantly at the door while being confronted by Deputy U.S. Attorney General Nicholas Katzenbach. (PHOTO VIA WIKIMEDIA COMMONS)

Eddie Hood, the great-great-grandson of a slave, said his mother taught him not to hate white people but to be careful around them.

Hood’s grandson Brandon Rucker, a member of the Jacksonville Church of Christ in Alabama, can’t recall his grandfather talking about race with him.

“We were just, I guess, raised properly, and it just never seemed to be an issue,” Rucker told me when I met him at a Jacksonville worship assembly. “When I brought home friends from school and whatnot, he would just compliment me being around good people, regardless of race. Color was never mentioned. It was never an issue at all.”

Like his grandfather, Rucker was surprised to see Hood making news. (Rucker leads singing in the below video).

Posted by The Christian Chronicle on Sunday, November 8, 2015

“It’s a little unsettling to know that race is still used as a criteria for either accepting or rejecting jurors,” said Rucker, who was unaware of the case until reading news reports. “That should be a non-issue as well.”

The Supreme Court is expected to rule before its current term ends next June. Hood is curious to see what the justices decide.

Meanwhile, he takes pride in helping knock down racial barriers closer to home.

“My neighbor here put up a fence when I first moved in,” Hood said as he walked me to my car.

Eventually, though, he and the white neighbor became friends — and the fence disappeared.