In Montreal's secular culture, many native Canadians see no need for faith. Immigrants ‘are readier to hear about God,’ minister Roger Saumur says.

MONTREAL — Montreal’s heart has grown cold to the Gospel.

The largest French-speaking city in North America can be a lonely place to be a Christian. 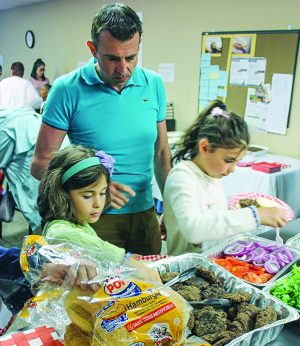 Horald Shabanaj and daughters Isabelle, 8, and Vanessa,10, fill their plates at a church fellowship meal.

“Our society, it’s secular,” said Horald Shabanaj, an Albanian immigrant and member of the Ville-Émard Church of Christ in the Quebec city. “People don’t care about God. There is a strong temptation to do things other than coming to church.”

A 2016 article in The Economist characterized Quebec this way: “The Catholic heritage is everywhere, in street names, monuments and church buildings which often have been converted to secular use. But Catholic practice has plummeted. The province’s main metropolis, Montreal, is as non-religious a place as any in secular Europe.”

While 75 percent of the province’s people still identify as Catholic, only 11 percent say they are regular worshipers, the article noted.

It’s against this backdrop that the Ville-Émard Church of Christ ministers. That’s “Église du Christ” in French, as the sign out front proclaims above spray-painted graffiti. 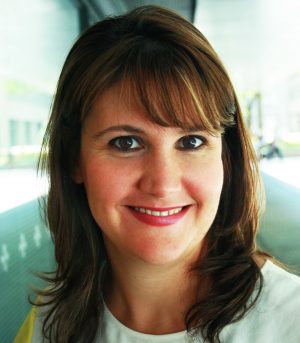 The church meets in a one-time funeral home a few doors down from a Hindu temple and across the street from a Vietnamese restaurant. There’s a Tim Hortons, the quintessential Canadian coffee and doughnut shop, at the corner.

The close-knit congregation, five minutes from downtown and close to a subway station, brings together Christians of about 15 nationalities, from Chinese to Haitian to Ukrainian.

“Everybody comes from different countries and cultures,” said Nadja Grabovari, Shabanaj’s wife. “But we share one God, and that’s what brings us together every Sunday in our worship and singing praises to him. That makes us closer as a church.” 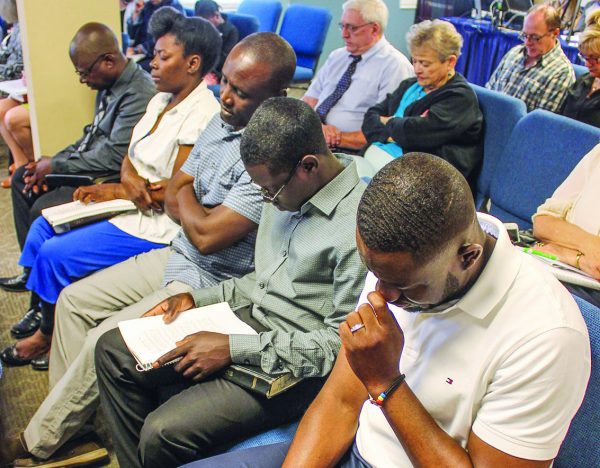 Christians from all over the world worship with the Ville-Émard Church of Christ.

The 60 members worship in French and English each Sunday.

Minister Roger Saumur, a native Canadian who grew up Catholic, preaches in French one week and English the next.

“They just hear the word ‘religion,’ and they are ready to run away.”

For those who don’t speak both languages, an interpreter provides simultaneous translation via earphones.

“The hardest people to convert, believe it or not, are the French Canadians,” said Saumur, a former waiter baptized in 1986 after Jehovah’s Witnesses came to his door and inspired him to study the Bible. “They just hear the word ‘religion,’ and they are ready to run away.”

Many people in Montreal identify as nonpracticing Catholics who do not feel a need to make changes in their lives, Saumur said.

“Just like today, I’m a nonpracticing vegetarian,” the 60-year-old minister said with a chuckle.

Related: ‘The way to the heart’

Others have been so hurt by the Catholic Church that they are turned off to religion entirely, he added.

On the other hand, immigrants — who represent roughly a quarter of the Montreal metro area’s 4 million residents — “are much more open because they don’t have that background,” said Saumur, who preached his first sermon less than four months after his baptism. “So they are readier to hear about God.” 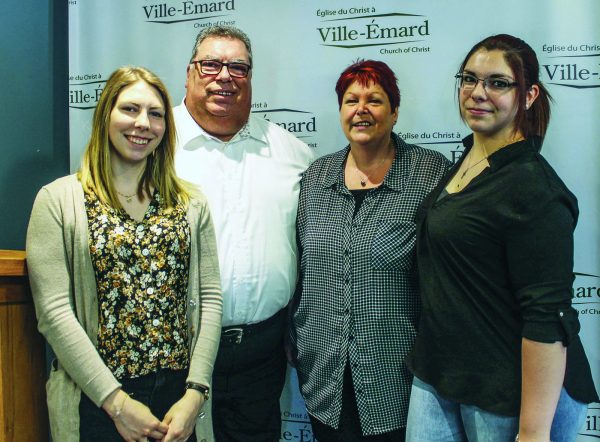 Minister Roger Saumur and his wife, Diane, with daughters Myriam and Lydia.

Saumur and his wife, Diane, have brought hundreds to Christ. However, many have moved away. Others have fallen away.

“If we get everybody who’s been converted here, we may have 400 or 450 persons who are still Christians somewhere else,” Saumur said in an interview in his church office. “But because people are moving all the time, we’re only about 60.

“And it may look like a small work,” he added. “But when you think about it, there are so many people who are working some other place or are part of a church somewhere else. So it’s a big work we do, even if it’s a little place.” 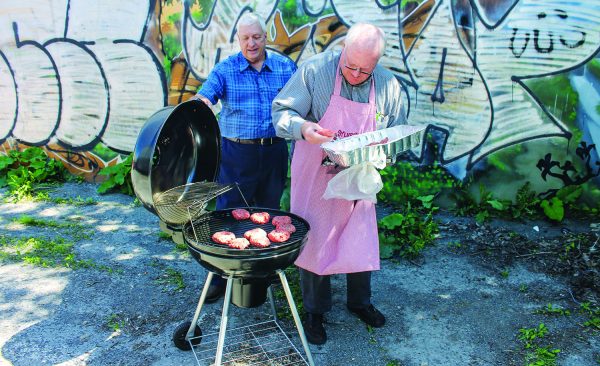 A time to encourage

For three decades, the Edmond Church of Christ — a 1,200-member congregation north of Oklahoma City — has supported Saumur and his wife, Diane, who have two daughters, Myriam, 21, and Lydia, 19.

The last three years, the Oklahoma church has sent a short-term mission team to Montreal — not to conduct an evangelistic campaign or Vacation Bible School but simply to encourage Ville-Émard members.

“Being a small group in a big metropolitan area, the members can feel isolated,” said Edmond elder Mike Cain, who made the trip in 2016. “I wanted them to know that there is a ripple effect around the world every Sunday during the Lord’s Supper. It is one of the most significant acts of fellowship that goes beyond the walls of a church building.”

This summer, nearly a dozen Edmond members — including Phil Sanders, speaker for the “In Search of the Lord’s Way” television ministry — made the 1,600-mile journey to the Canadian city. 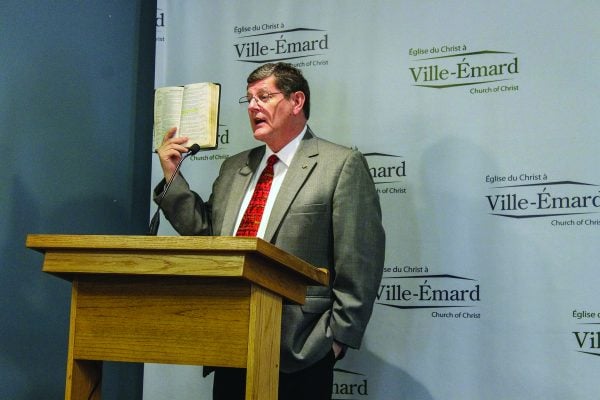 Phil Sanders, speaker for the “In Search of the Lord’s Way” television ministry, preaches at the Ville-Émard church.

“They come with the purpose of serving,” said Maurice Dunkley, a Jamaican immigrant and Ville-Émard church member. “They teach. They preach. They also feed us.

“I am happy to see that they would remember us,” he added. “We owe a lot to one another as Christians as we keep the faith.”

The group flew to Montreal, about 60 miles north of the New York state line, on a Friday. That Saturday, they bought groceries at a Walmart and prepared a fellowship meal for their Canadian brothers and sisters. 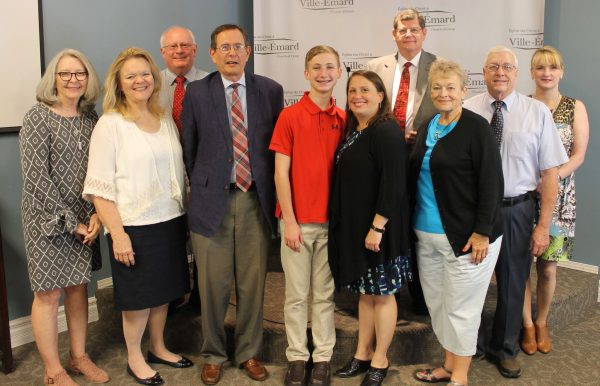 The Edmond mission group at the Ville-Émard church.

Ron Pearman and Doyle Martin grilled burgers. Bev Pearman and Sue Martin prepared side dishes and desserts. Sanders presented Bible lessons that Saturday and preached Sunday. Tara Colley taught the women, and Gayle Draper worked with the children. Lee Anne Paris, who came with her son, Trenton, helped with translation. Paris grew up in a missionary family in Brazil and speaks multiple languages.

“We didn’t know exactly what we wanted to do up here,” said Edmond member James Crowder, who has known the Saumurs for 30 years. “But we said, ‘Let’s just get up there and let them know that we pray for them, we think about them, we love them.’

“You don’t want a big congregation being a burden on a small congregation,” he added. “So we said, ‘Let’s have a fellowship meal,’ which we did that first year, and I thought it was a great success. And people said, ‘When can we go back?’” 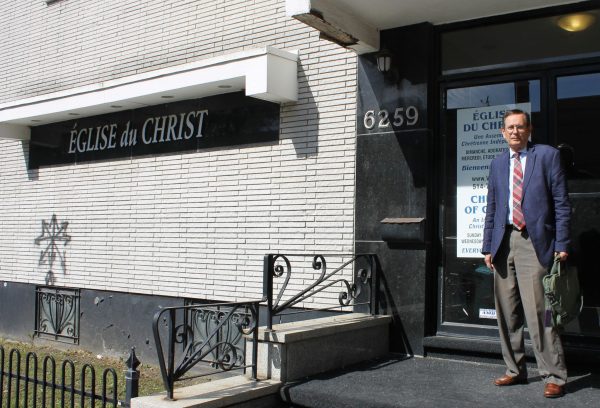 James Crowder at the Ville-Émard church.

Draper said of the Ville-Émard church: “They are so open and friendly and welcoming. Most speak English, but even those that do not, we can feel their warmth.”

Roger Saumur said the congregation understands that the Edmond church sends him a check each month. 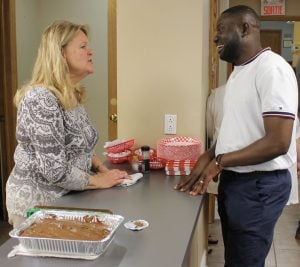 Bev Pearman visits with a Ville-Émard church member at the fellowship meal.

But that’s less concrete to most, he said, than the actual presence of fellow Christians from Oklahoma.

“When they see the people and share in the fellowship, we’re really building something as far as our relationship,” he said. “So I think this is really good for the church.”

Diane Saumur added: “When the Edmond members come, even though it’s just two days that they get to spend with our people, we can feel it for a long time after they’re gone. It’s encouraging for us.”

Shabanaj, who speaks Albanian, English, Italian and French, said he especially appreciates his fellow Christians’ influence on his daughters, Vanessa, 10, and Isabelle, 8.

“Sometimes my daughters are challenged,” he said. “They mention their friends that don’t go to church. It’s good to show them that we are not alone, that they have so many brothers and sisters like us.” 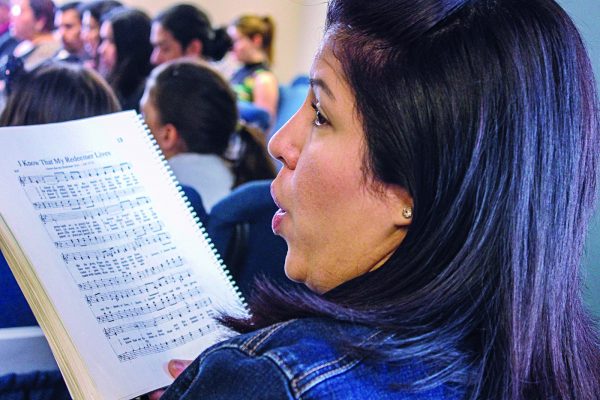 Daiana Rodriguez sings during Sunday worship at the Ville-Émard church.

Also welcoming the fellowship are Daiana (which is pronounced like “Diana”) Rodriguez and her 22-year-old daughter, Veronica Ríos-Rodriguez.

Ríos-Rodriguez was born not long after her mother and late father, Jose Ríos, immigrated to Canada from Venezuela in 1995.

When the Spanish-speaking couple first arrived at the congregation that later became the Ville-Émard church, they were still learning French. 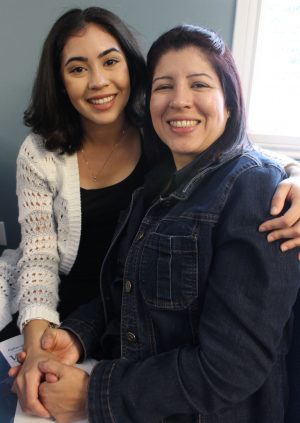 Veronica Ríos-Rodriguez and her mother, Daiana Rodriguez, at the Ville-Émard church.

“So we basically communicated with a lot of body language, very broken French,” Rodriguez said. “Most people were local, French people, and some of them were from Haiti.”

But a merger with an English-speaking group and the influx of immigrants from around the world made the church much more diverse, she said. She laughed as she recalled that she didn’t realize she could understand Portuguese until she had to translate for a visitor from Brazil.

Now, Rodriguez said, the conversations at the Ville-Émard church resemble the day of Pentecost described in Acts 2.

Rodriguez made a 2015 trip to Oklahoma to worship with fellow Christians there. She praises God, she said, for the diversity that he has allowed her to experience.

“I have this amazing view of the brotherhood — of people from Africa, from Haiti, from Central America,” she said after Sunday worship. “It’s the same Lord. It’s the same love. It’s just in another nationality.”