WINNIPEG, Manitoba — Before Shawn LeBlanc became a Christian, he drank. He did drugs. He partied. He played drums in a rock band.

But LeBlanc’s lifestyle changed after a colleague at the mattress factory where he worked in his hometown of Moncton, New Brunswick, encouraged him to read the Bible.

Related: Running away from religion

“I said, ‘I don’t have a Bible,’” recalled LeBlanc, now one of the ministers for the Central Church of Christ in Winnipeg, capital of the province of Manitoba in western Canada.

“So, he gave me one, and it started from there,” the 50-year-old native Canadian added. “It took me about two months, and I read through the entire thing.”

LeBlanc was 34 when he was baptized. Eight months later, he started preaching.

Eventually, he attended Great Lakes Bible College in Waterloo, Ontario, where he studied in English — and learned Greek — after having attended a French-speaking high school.

“I knew I was a part of the body of Christ, and this is how I wanted to serve him,” LeBlanc said of entering full-time ministry. “But I wasn’t sure I could do it. I had a lot of encouragement along the way.” 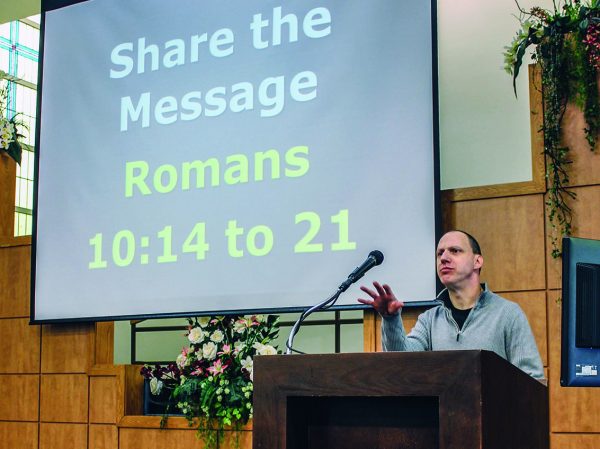 Shawn LeBlanc preaches for the Central Church of Christ in Winnipeg. He has served the congregation since 2016.

LeBlanc was serving a congregation in St. John, New Brunswick, on Canada’s east coast when the opportunity came to move to Winnipeg in 2016. The St. John church, where he worked for seven years, averaged Sunday attendance of about 13.

Little did LeBlanc know that the Central congregation — with about 300 members — ranks as Canada’s largest Church of Christ.

Related: In Canada, seeking redemption for a long, dark chapter

The change — both in terms of numbers and responsibility — has been a blessing and a challenge, LeBlanc said.

LeBlanc moved into a preaching role held for 38 years by Wayne Turner, who retired from full-time ministry but remains one of the Central church’s five elders, along with Jim Hobbs, Gary King, Glen Knutson and John Muller. LeBlanc’s wife, Chieh, is from Singapore.

Joining LeBlanc on the ministry staff is Jay Manimtim, who has a Filipino background and retired from the Canadian Armed Forces with 20 years of service. His wife, Linda, also is Filipino. 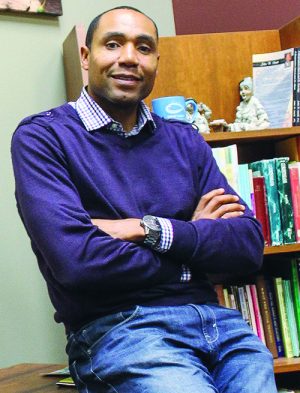 Chad Celaire, shown in his former youth ministry office, is a 15-year member of the Central Church of Christ in Winnipeg.

The Central church’s diversity stood out when LeBlanc came to interview for the ministry position, he said.

Winnipeg is a metro area of 825,000 at the eastern edge of the Canadian Prairies. It’s about 70 miles north of the U.S. border. The area has welcomed more than 135,000 immigrants since 1980. Those immigrants have come from countries including the Philippines, India, Great Britain, Germany, China, Nigeria and Pakistan.

The Central church reflects the cosmopolitan nature of Winnipeg, home of the National Hockey League’s Jets.

“We have an annual international dinner,” said Chad Celaire, a 15-year Central member and former youth minister who gave his life to Christ while playing basketball for Rochester College in Michigan. “The last time we did our dinner, I think there were 30 different countries represented in our church. I say it’s the United Nations.”

Many students who attend the nearby University of Manitoba are among the Christians of various nationalities who look forward to the church’s regular potluck meals, said Eva King, wife of elder Gary King.

“We eat like crazy,” Eva King said with a chuckle. “Members and visitors alike … all come to eat with us because there is always going to be food and fellowship.” 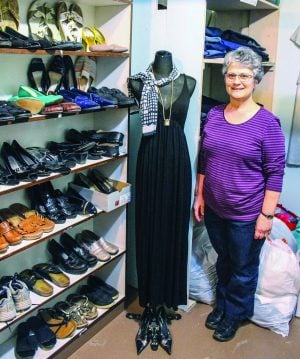 Eva King, wife of elder Gary King, poses in the Central Church of Christ’s clothing closet, which covers much of the basement.

“So, what you’re saying is that the way to the heart is through the stomach,” Gary King quipped with a smile.

Besides its diversity, the Central church’s emphasis on sharing the Gospel with its community impressed LeBlanc.

The congregation makes connections with neighbors through Celebrate Recovery, a Christ-centered addiction recovery ministry, and FriendSpeak, which uses the Bible to help immigrants improve English skills. Besides those programs, the church serves the poor with a clothing closet that covers much of its basement.

“A lot of the programs that we have really do a lot as far as trying to reach the people of Winnipeg,” LeBlanc said.

“For example, Celebrate Recovery and FriendSpeak have brought a lot of people who come on Sunday morning,” he added. “Some of them have been converted. … It’s really done a lot to get them from point A to point B, into the church, sitting down and worshiping and listening, and that’s appealing. That’s all I want.”

Filed under: Canada International The Church in Canada