For these Syrians, church members have become 'a second family.'

ST. CATHARINES, Ontario — Ten-year-old Mohammed and his sister Miriam, 6, shriek with excitement when they hear knocking at the front door.

The pint-sized Syrian refugees are expecting Jori Warren, one of a handful of Canadian church members bringing meals while the children’s mother, Samia, recovers from gallbladder surgery.

The brother and sister trip over each other as they run to answer the door. 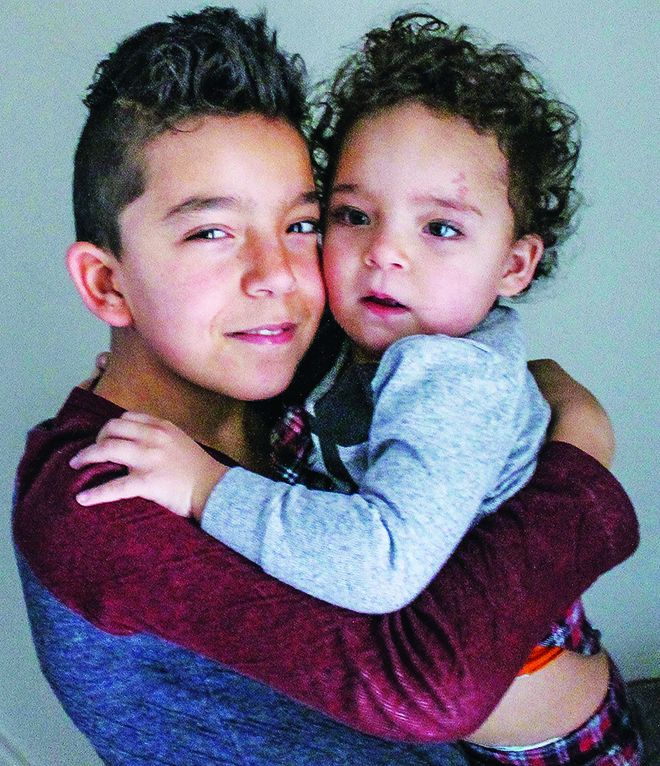 Mohammed, 10, with his sister Celine, 2. (PHOTO BY BOBBY ROSS JR.)A year ago, two Churches of Christ south of Toronto — their hearts touched by the plight of strangers abroad and resolved to show the love of Jesus — sponsored the Faham Katan family’s resettlement to Canada.

On this recent Saturday — with Mohammed, Miriam and their four other sisters all home from school — the Faham Katan household buzzes with chatter and laughter.

In the living room, the Muslim father, Moamar, 44, visits with minister Noel Walker and his wife, Julie, from the Tintern Church of Christ, which joined with the Beamsville Church of Christ to help the family start a new life here in Canada’s Niagara region. 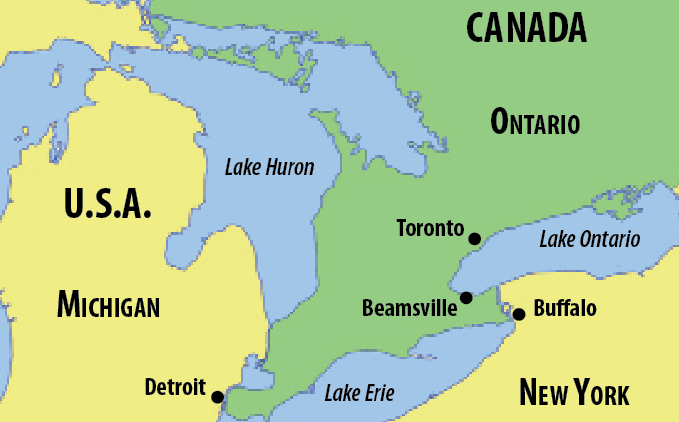 St. Catharines is east of Beamsville in Canada’s Niagara region.
A hijab covers the head of 18-year-old Samira — the oldest sister — as she serves tiny cups of expresso to the family’s guests.

Twins Reem and Raneem, 16, sit by their ailing mother, who leans against a pillow and stretches out her legs under a blanket on the couch.

Two-year-old Celine entered the world during the family’s years at a refugee camp in Lebanon. Wearing a Minnie Mouse T-shirt, she zips happily from person to person.

One of the toddler’s favorite pastimes is raising her hand to her forehead and singing the Canadian national anthem.

“Every morning at 6 a.m., it’s ‘O Canada,’” a chuckling Moamar says of the way his youngest daughter wakes him up.

‘They’re everything to us’

On a late winter day, patches of snow cover the ground outside the two-story townhouse that the churches rented for the Syrian family. 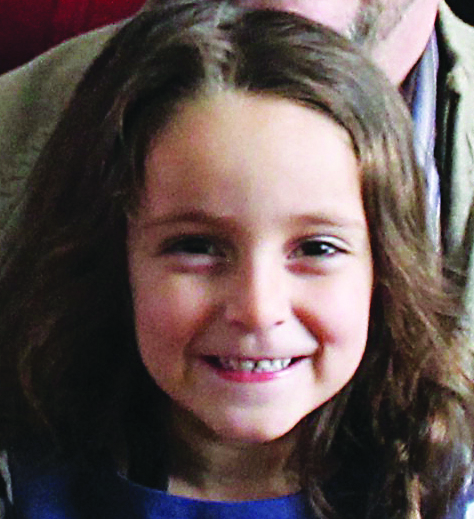 MiriamBut Miriam, who earlier went with Jori Warren to see her favorite princess, Elsa, perform at “Disney On Ice,” wants to know about dessert.

“And cupcakes?” the girl asks.

“They are sprinkled cupcakes with vanilla icing,” the church member says.

Samia, 41, remains in pain after her surgery but greets Jori Warren with a hug and a smile.

“They’re everything to us,” Jori Warren says of the Syrian family. “They’ve been a ray of sunshine for our family.”

As Miriam snuggles against him, Earl Warren recalls the first time he met the refugees.

“This little one came running to me — she didn’t know me — and gave me a great big kiss right smack on the lips,” the retired General Motors worker says. “And she had me for life.” 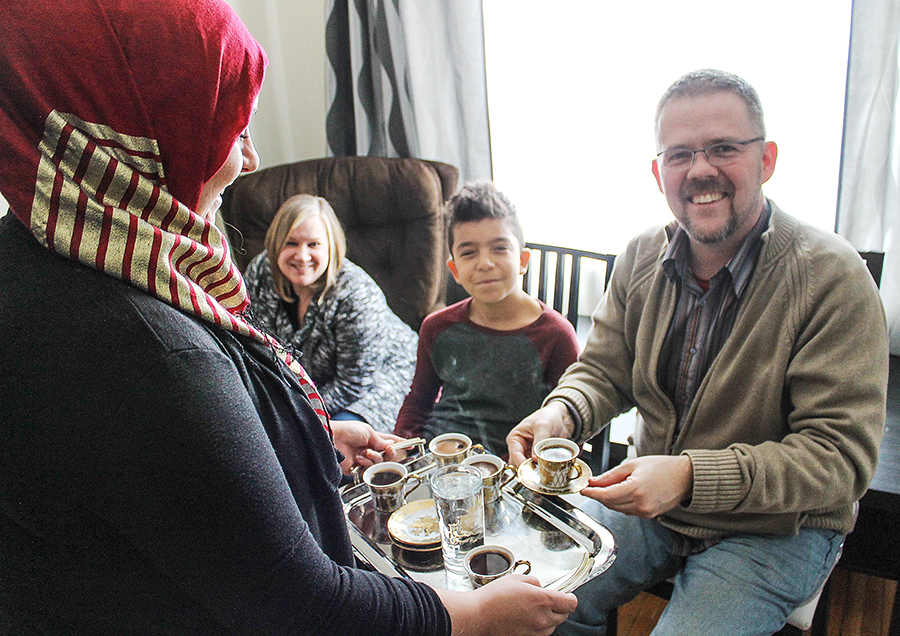 Samira, 18, serves a tiny cup of expresso to minister Noel Walker, as Julie Walker and Mohammed smile at the camera. (PHOTO BY BOBBY ROSS JR.)

Back in September 2015, a 3-year-old Syrian boy named Aylan Kurdi drowned after a 15-foot boat ferrying him to a Greek island capsized.

Pictures of the toddler’s lifeless body on a beach horrified millions around the globe and spurred the two Canadian churches to act.

“As a mother, I just couldn’t imagine it,” Jori Warren says. “You don’t just put your kids in a boat with their life on the line if their life wasn’t already in jeopardy.”

Rather than undergo a lengthy paperwork process to sponsor the family, the churches partnered with the Mennonite Central Committee — a refugee placement organization already recognized by the Canadian government.

Led by Tintern deacon Roger Perry, a committee of 24 men and women formed to tackle the family’s needs — from housing to medical care to transportation to schools.

Read “Canadian churches embrace Syrian refugees,” our 2016 feature on the Tintern and Beamsville congregations. (ILLUSTRATION BY DAN McGREGOR)In a story last year, The Christian Chronicle first highlighted the churches’ decision to sponsor refugees. However, rules precluded members from identifying the Syrian family or asking them to submit to media interviews. But the terms of that agreement have ended.

In the original report, Belal el Hassan, a 50-year-old Canadian citizen who was born in a Palestinian refugee camp in Lebanon, spoke on the family’s behalf.

“Thank you for saving their lives,” el Hassan, who is Muslim, said he told church members.

“I would like to emphasize how much the Syrian family appreciates and thanks the Church of Christ for bringing them over, and they will never forget that favor to them,” he told the Chronicle.

As planned all along, the churches’ financial support of the Faham Katans ceased after 12 months. However, the Christians and the Muslim family maintain their tight-knit relationship.

“At the end of one year, we’re still together because we’re now family,” Noel Walker says. 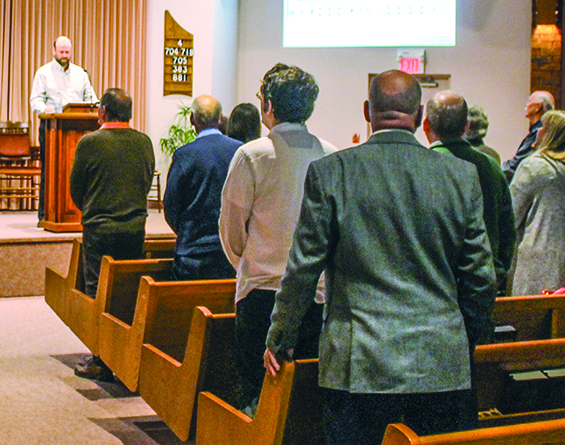 The Beamsville Church of Christ in Ontario stands to sing on a Sunday morning. (PHOTO BY BOBBY ROSS JR.)Moamar, who works at a medical facility’s parking garage, nods in agreement.

“I hope every Arab people come to Canada,” the mother says. “I have a second family.”

When the Syrians arrived at Toronto Pearson International Airport on a plane full of refugees, they spoke no English. But they’re learning the language quickly.

“Everything in Canada is really good,” says Samia, who spends most weekdays in English language classes at a multicultural center. “Canada’s people have a big heart. The future for the children is very, very, very good.”

“And your favorite is Justin Trudeau,” Noel Walker teases.

“Oh, my goodness,” she responds, her voice drenched with affection for Canada’s magazine-cover-handsome prime minister.

The rest of the family can’t help but laugh. 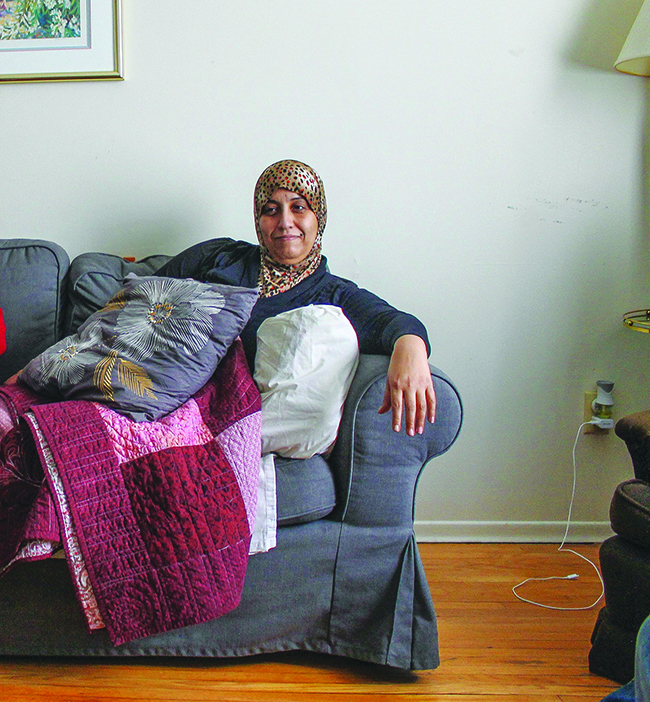 Just a few years ago, the future did not look so bright for the Faham Katan family.

Noel Walker says he heard Moamar explain through an interpreter how his worst fears about Syria’s civil war were confirmed in 2011 when a missile struck the family’s apartment.

The father, mother and children packed up and fled to Lebanon, where they lived in a barn. But in Lebanon, the girls had no access to schools. Raheem, who has cerebral palsy, faced a particularly bleak outlook.

“When I first met Moamar, I quickly learned that he loves his son and his daughters very deeply — in the same manner that you or I would,” says Noel Walker, himself a father of four.

“For people who have been through so much, they are not angry, bitter or vindictive but are still loving,” she says. “They are not at all what I had anticipated. People do not realize how much they have to offer new immigrants, and we are the ones who have gained so much in the process.” 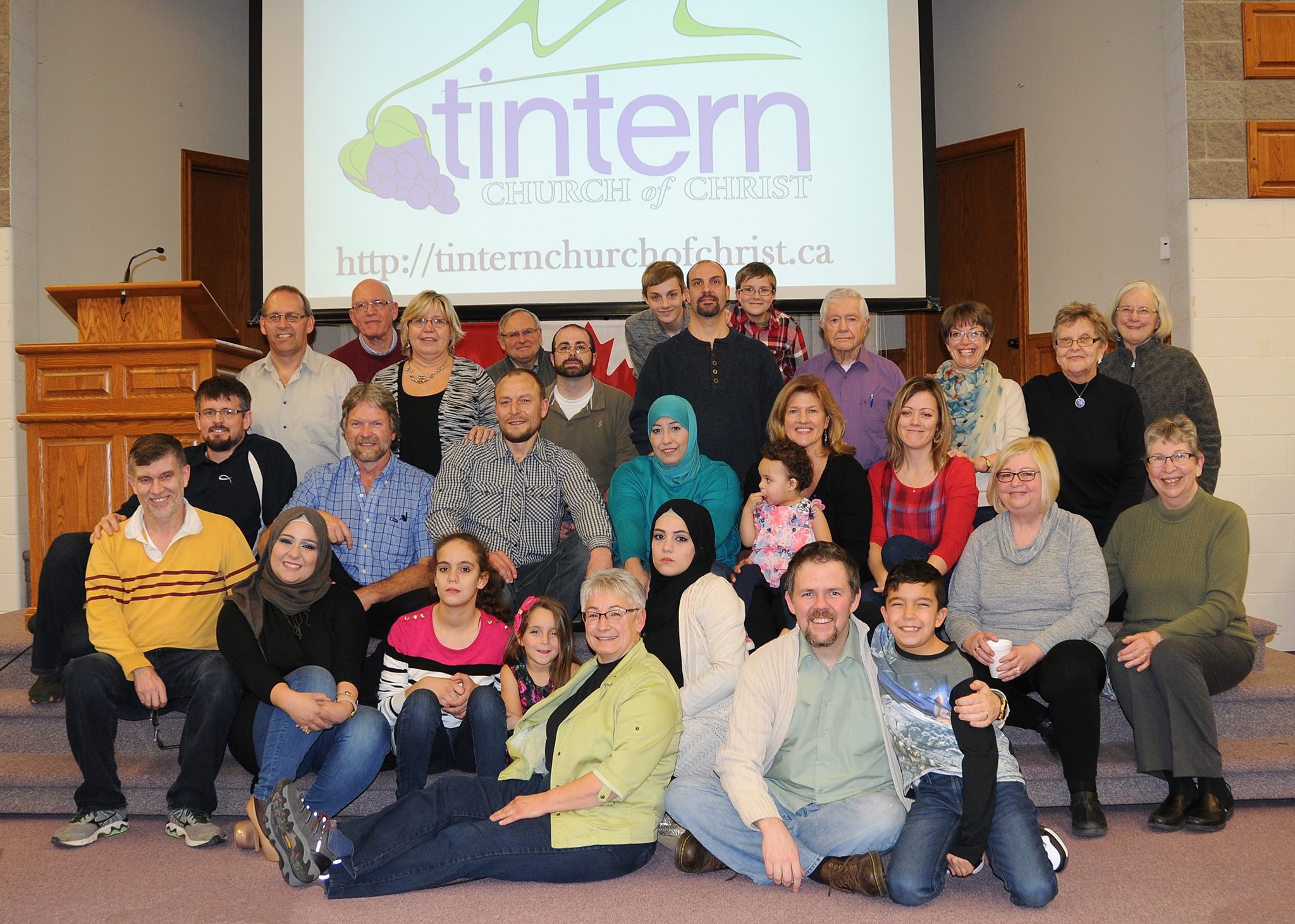 The Faham Katan family and church members pose for a group photo at the Tintern Church of Christ. (PHOTO PROVIDED BY NOEL WALKER)

Since moving to Canada, Mohammed has learned to ice skate and enjoyed a Niagara Ice Dogs hockey game with his father and Noel Walker.

But it’s the size of the boy’s heart that impresses Jori Warren.

Recently, church member Linda Minter took him and Miriam to see Dr. Martin Cann, a dentist who also serves as one of the Tintern church’s elders. On the drive, Mohammed noticed a man standing beside the highway and holding a sign.

Read more stories on Churches of Christ in Canada. “He’s homeless, so he’s begging for money,” Minter told him.

“Well, I have a loonie in my pocket that I found,” Mohammed replied, referring to Canada’s $1 coin. “Can we stop so I can give it to him?”

Of course, she said.

“I was so proud of you,” Jori Warren tells Mohammed. “See, when you don’t even know it, people find out things. And God always knows.”

From the beginning, the church members have voiced a desire to introduce the family to Jesus — even while learning more about the refugees’ own faith.

Although Moamar, the father, still attends Friday prayers at a mosque, he describes the Tintern congregation as “his church,” Noel Walker says.

“We are still getting to know them, and they are getting to know Jesus through us,” the minister says. “The whole family volunteered to help during last summer’s Vacation Bible School, and it was a delight to see them working with us and learning about Jesus at the same time. I can’t wait to see where this story will lead.”

Filed under: International refugees The Church in Canada