Bobby Ross Jr.
Editor-in-Chief
TORONTO — Gerald Ellis is a rare breed at the Strathmore Boulevard Church of Christ.
He’s a native Canadian.
In this cosmopolitan city of 2.5 million residents — roughly half born outside of Canada — the 200-member congregation reflects the international population.
“We’re all God’s children, no matter what color,” said Ellis, a deacon who has seen the church grow much more multicultural.
On any given Sunday, Christians representing 32 nationalities assemble at the red-brick church building, across the street from a subway station.
“This is how it’s going to be in heaven,” said Jean Volcy, an immigrant from Haiti who serves as one of the congregation’s four elders.
Peter Dwomoh, another of the elders, is from Ghana.
A bus driver who works 12-hour shifts, Dwomoh arrived in Toronto on a Friday and showed up at the church that Sunday.
As Churches of Christ in Ontario — and throughout Canada — struggle to influence a largely secular culture, Christian immigrants from around the world provide a spiritual and numerical boost, leaders said.
“These brothers and sisters have brought a new vitality with them. Some also come with a zeal for reaching the lost,” said Art Ford, minister of the Fennell Avenue Church of Christ in Hamilton, 40 miles southwest of Toronto.
Native Canadian Fred Knutson serves as a deacon at the Bramalea Church of Christ, a 150-member, suburban Toronto congregation that comprises 26 nationalities.

“A lot of the people that move here are quite spiritually active and interested,” Knutson said. “A lot of Canadians who are white Anglo-Saxons … with British backgrounds are almost irreligious anymore. I mean, they’re very disinterested. So, they’re a tough sale.”
In his hometown of Fond Parisien, Haiti, near the Dominican border, Volcy can always find a crowd willing to listen to a sermon.
“You never go and start preaching and not find anybody who will listen,” said Volcy, who shares the gospel in French and Creole on annual mission trips to his home country.
That’s not the case in Canada, said Volcy, who teaches in English and Spanish at Strathmore Boulevard.
Back home in Ghana, Dwomoh can knock on just about any door and start a conversation about Jesus. But in Canada, simply leaving a gospel tract at someone’s door might draw an angry reaction, Dwomoh said. Still, he doesn’t give up hope.
“Your life can lead people to Christ, so the way you talk to people, the way you react to people also sends a message,” he said.
A nation of about 33 million souls, Canada has about 150 Churches of Christ.
Their combined membership totals about 7,000. Roughly half the congregations and members are in Ontario.

The U.S. population is about nine times as large as Canada, but its Church of Christ membership — at roughly 1.3 million — is about 185 times as large.
“For 150 years, if not longer, the Canadian culture has been very much opposed to evangelical or sectarian movements,” said Geoffrey Ellis, chairman of the Canadian Churches of Christ Historical Society and an uncle of Gerald Ellis. “Consequently, our growth rate is perhaps one-tenth of (U.S.) growth, and we have tended to assume that this has been a failure.”
But it just may be, he said, that the Canadian church needs to reassess itself in terms of its own culture.

Among Ontario residents, about 35 percent are Protestant. Mainline churches such as the United Church of Canada and the Anglican Church dominate the nation’s Protestant makeup, with only about 7 percent of Canadians identifying with evangelical churches, according to Geoffrey Ellis.
“Mainline adherents have been highly resistant to evangelical efforts,” he said. “At the same time, mainline adherents have been susceptible to secularization.”
Asked to assess the state of Churches of Christ in Ontario, Ellis characterized it as “graying, struggling, with signs of possible resurgence.”
Canada’s churches are “at a crossroads,” said Ford, former president of Great Lakes Christian High School, a residential high school in Beamsville.
“Unfortunately, we have congregations that are shrinking,” Ford said. “Sometimes, these congregations are reflecting the aging and shrinking of the population base in the community. Sometimes, either leaders or groups in the congregation won’t set aside a pet ‘ism’ to provide a healthy environment for growth.”
At the same time, Christians at times “have been so caught up in societal values that we don’t seem to worry about the lost around us,” he said.
Irina Berdnikova, 34, a Russian-born mechanical engineer and mother of 6-year-old Alina, worships at the Bramalea church.
“Somehow, Canada puts people in the spot where everybody should have freedom, and sometimes maybe we don’t want to make people get offended by religion,” Berdnikova said. “Everybody is free to believe what they want and do what they want, and we have lots of temples and mosques and churches on each corner.”
But Tony Lourenco is not ready to declare New Testament Christianity dead in Canada. Born in Angola and baptized in South Africa, he is part of a group of Bramalea members who — with the congregation’s blessing — planted a new church in the Toronto suburb of Mississauga last fall.
The city of nearly 700,000 was the largest in Canada without a Church of Christ.
The church-planting team includes Paul Neves, from the Portuguese-speaking island of Azores in the Atlantic Ocean; Moses and Donna Lall, from Guyana; and Robin and Linda Mattedeen, from Trinidad.
The church, with an attendance in the 40s, meets in a school and focuses on inviting neighbors to a monthly fellowship meal.
“The ground is plenty fertile,” Lourenco said, noting the plethora of young families and new homes in the community where the congregation meets. “It’s just that the church has lost a bit of its way.”
In Lourenco’s view, churches have spent too much time on “needless arguments” and not enough time exposing friends and neighbors to the Gospel.
Over the last 10 years, several older congregations disbanded in Ontario, while church planting — which saw significant activity in the post-war decades — dropped to almost nothing, Geoffrey Ellis said.
But in recent months, two new churches have been planted.
Besides the Mississauga effort, another glimmer of hope for the church in Ontario is a congregation started at a youth center in Cambridge, 60 miles southwest of Toronto.
Greg and Heather Whitfield, a couple in their 20s, work with the church, which meets in a one-time grocery store where teenagers play pool and video games.
Greg Whitfield grew up in a small, rural Ontario church that closed a few years ago.
“My personal opinion is that some desperate measures need to be taken,” he said, “maybe even like closing the doors of a church building and the church starting to meet in homes or community centers.”
Max Craddock, minister of the Strathmore Boulevard church, serves as co-editor of the Gospel Herald, a news and teaching publication in Canada, and as speaker for the “Key to the Kingdom” television ministry.
“These new works, I think, are a good thing,” Craddock said of the church plants. “There are congregations like Bramalea that are active and growing. There are also congregations that are just holding their own, like everywhere.
“I don’t suppose we’ll ever be satisfied, until we convert everybody,” he added. “But I’d say the church in Ontario is reasonably healthy.”
Despite societal obstacles, Don Rose, president of Great Lakes Christian High School and Great Lakes Bible College, both in Ontario, said he finds inspiration in the church members he meets throughout the province.
“Individual brothers and sisters who are contending for the faith are well and strong and ready to take up the challenge,” Rose said.

LOCATION: Central Canada, bordered by Manitoba to the west, Quebec to the east, Minnesota, Michigan, Ohio and Pennsylvania (across Lake Erie) from east to west and New York to the south and east.
POPULATION: 12,960,282, about 39 percent of the national population, according to the 2006 Census.
CHURCHES OF CHRIST: About 75 congregations with 3,500 members — about half of the total estimated 7,000 members nationwide.
CHRISTIAN EDUCATION: Great Lakes Christian High School in Beamsville serves high school students, many of whom live on campus in residence halls. Great Lakes Bible College in Waterloo trains preachers. Don Rose serves as president of both.
CAMPS: Omagh Bible Camp, near the town of Milton in southern Ontario, has influenced congregations — and especially children — for 72 years. Strawberry Point Christian Camp offers a wilderness-type camp experience on Manitoulin Island.  Camp Manitou features a boys wilderness program in northern Ontario.
EVENTS: Training for Service, a meeting and lectureship held each year on Good Friday, draws 550 to 800 Christians. It is sponsored by five Toronto area churches. Also each year, Great Lakes Christian sponsors a lectureship on the high school campus in Beamsville.

Filed under: The Church in Canada Uncategorized 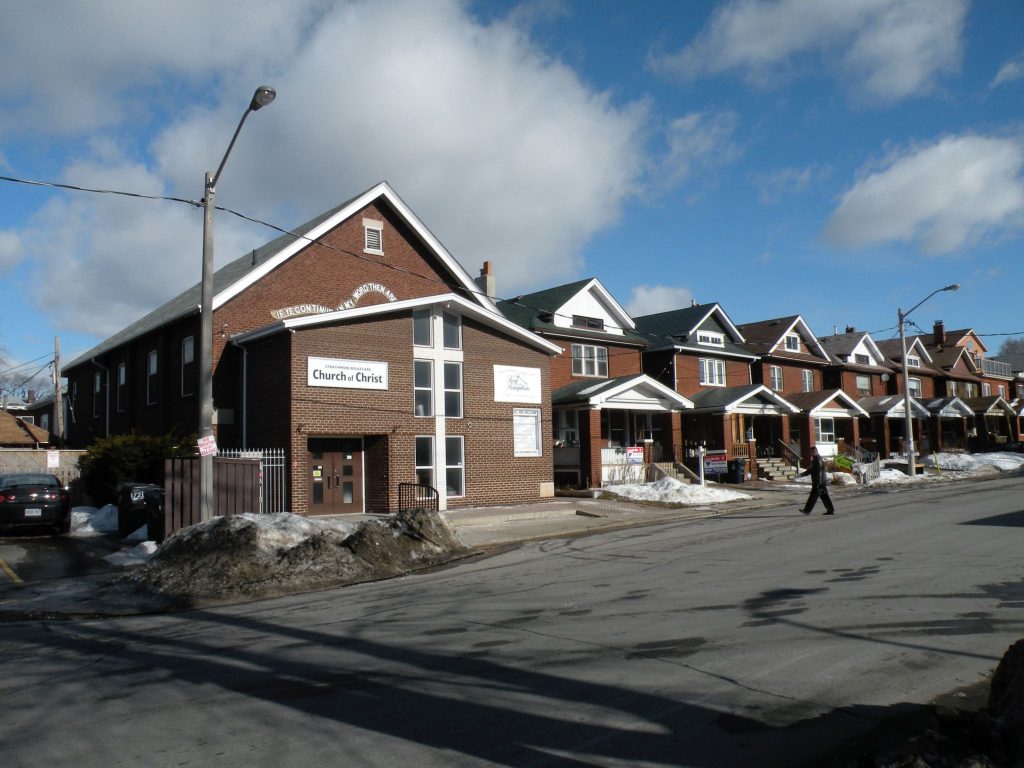 Max Craddock, a prominent preacher and television speaker in Canada,…