Nearly a decade after Hurricane Katrina, church planters see God at work in a 'dark and difficult part of New Orleans.'

NEW ORLEANS — Charles and Angela Marsalis survived the flood that followed Hurricane Katrina by escaping to the balcony of their home congregation, the Carrollton Avenue Church of Christ.

Later, the couple returned to Hollygrove — the high-crime New Orleans neighborhood where both grew up — to share Jesus with boys and girls on the front porch of a relative’s hurricane-damaged home. 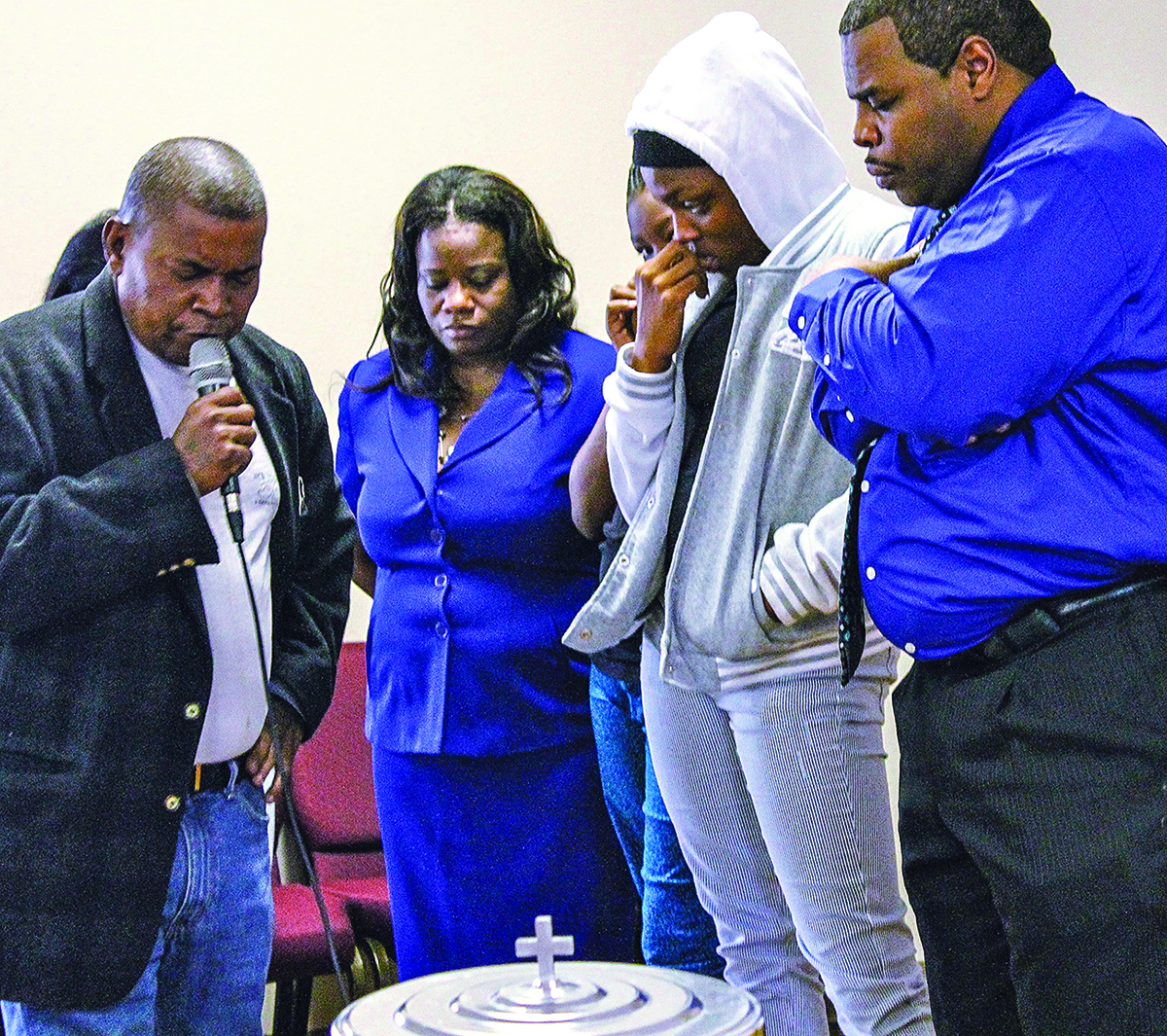 John Ellis prays as Angela Marsalis, Shekeira Honor (hidden behind Angela), Kevinisha Honor and Charles Marsalis bow their heads. (PHOTO BY BOBBY ROSS JR.) From those studies emerged the planting of the Hollygrove Church of Christ.

On a recent Sunday, the congregation celebrated its fifth anniversary with a standing-room-only crowd filling the 100 or so seats in a small, red-brick church building.

A siren wailed in the background as the back door opened and another worshiper squeezed into the assembly.

Too often, despair in the form of drugs, gangs and prostitution besets Hollygrove.

In 2006, Charles and Angela Marsalis pose in the balcony of the Carrollton Avenue Church of Christ, where they fled as floodwaters rose after Hurricane Katrina. (PHOTO BY BOBBY ROSS JR.)About a year ago, the Marsalises witnessed the spiritual warfare up close.
“We were watching TV about 9 o’clock at night when we heard this boom, boom, boom, boom, boom,” Charles Marsalis said. “I looked at Angela and said, ‘Is that gunshots?’ … A young man was shot like nine times right across from the church. They just don’t care where they shoot you at.”
“When I went outside, I was still smelling the smoke from the gun,” Angela Marsalis said. “That was scary.”
The church has brought hope — not to mention crawfish boils and fish-fry fellowships — to a neighborhood that desperately needs it.

“Lord, Be There,” the congregation sang on this Sunday — and the Marsalises say there’s no doubt that he has been there, every step of the way. 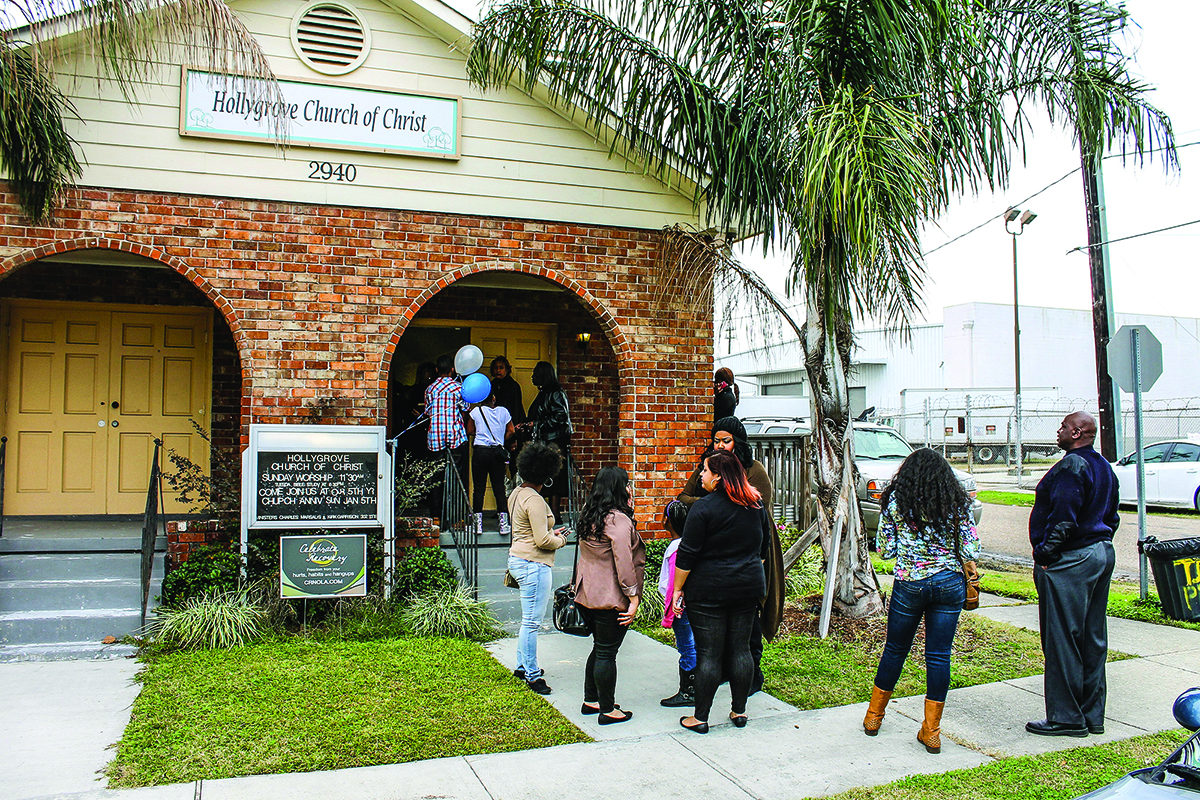 Balloons mark the fifth anniversary of the Hollygrove Church of Christ, as members and visitors greet each other after the Sunday morning worship service. (PHOTO BY BOBBY ROSS JR.)

AFTER THE STORM, PICTURE CLEARER

In 2005, leaving the Carrollton Avenue church in a rescue boat, the Marsalises witnessed Katrina’s utter devastation for the first time: Houses torn apart in every direction. Oily lakes where streets used to be. Worst of all, bodies floating in the water.
Hundreds of evacuees — hot, hungry and angry over their treatment — stretched across a bridge. Some had been there for days.
When they didn’t know how the story would end, when they feared that they just might melt away on a crowded overpass, a frustrated Charles Marsalis prayed that God would save him — or not.
“You’re going to bless me now or you’re going to bless me later — make up your mind,” he reasoned with his heavenly father. “If we’re going to die, we’re going to die doing your work. If we’re going to stay here, we’re still going to witness. So, make up your mind and do what you want to do.” 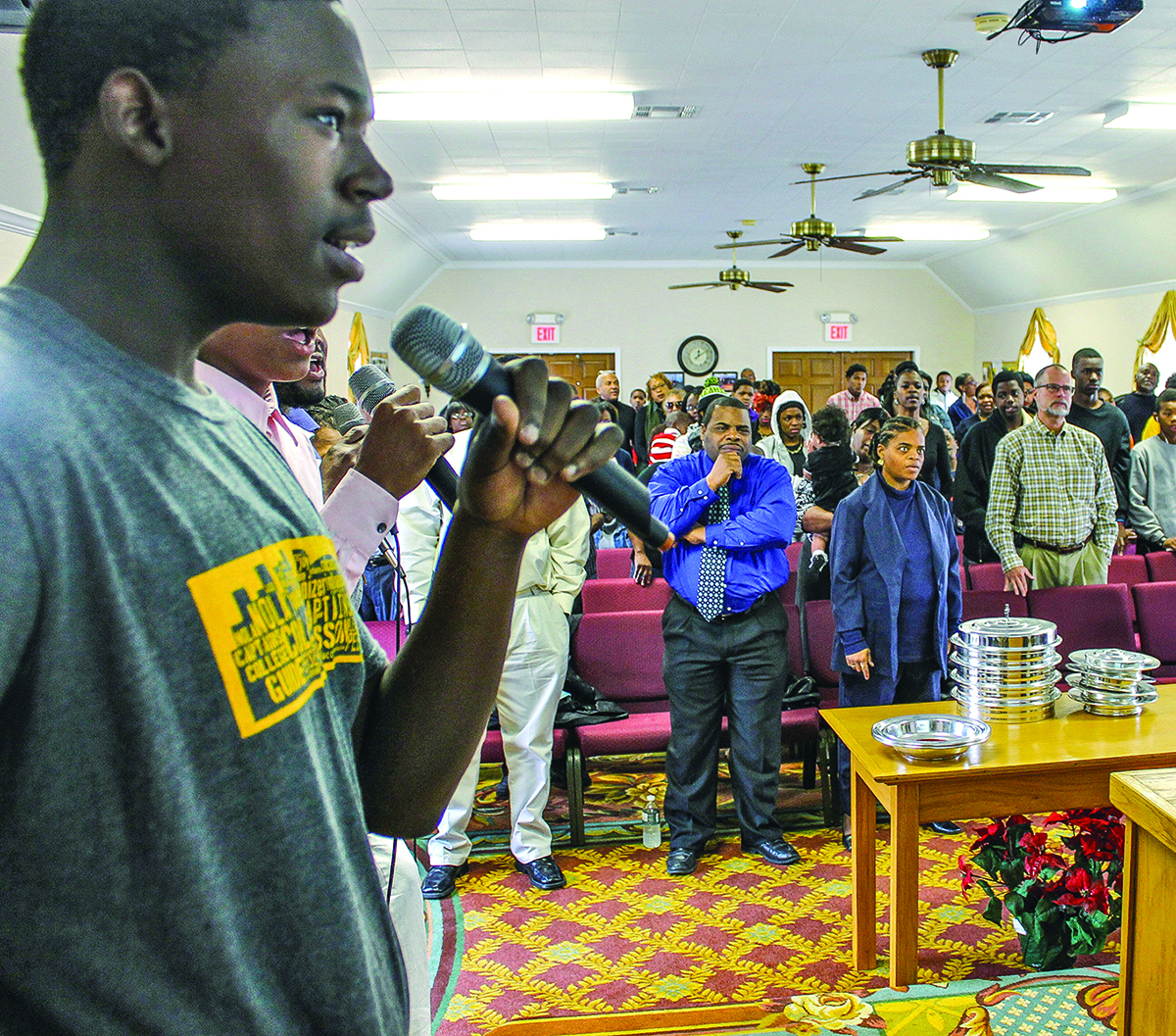 Gregory Hawkins, with the microphone, sings during the Sunday morning assembly of the Hollygrove church. Charles Marsalis, with the tie, can be seen on the front row. (PHOTO BY BOBBY ROSS JR.)

Eventually, a helicopter plucked the Marsalises from the bridge. With New Orleans in chaos, they relocated temporarily to Nashville, Tenn.

Blessed with the full picture, they look back and see God preparing them. Preparing them to come back home after a short time. Preparing them to minister to a city full of lost souls.
God, they believe, led them to Hollygrove, where Angela Marsalis’ mother, Verna Wallace, lived in a FEMA trailer as she repaired her flooded home. Wallace let her son-in-law and daughter use her porch for Bible studies. In exchange for the children’s attention, the couple served snacks and soft drinks.

In 2008, in the Hollygrove area of New Orleans, a Bible storyboard is leaned against a tree. Across the street, minister Charles Marsalis and his young friends search for a football lost in the weeds. (PHOTO BY BOBBY ROSS JR.)

On a typical Saturday in 2008, Charles Marsalis played football in the street with a group of boys as Angela Marsalis set up a storyboard of Jesus calling Peter to become a “fisher of men.”
Terrance Clark, now 14, was one of the original children who made his way to the porch.
“Everybody just started coming for the food,” said Terrance, who was baptized on a recent Sunday. “But pretty soon, like every day, everybody wanted to come and sit down and learn about God.”
Like her younger brother, Malickah Clark, 17, said the Marsalises taught her about Jesus.
“Just the vibe that they give,” Malickah said of why she kept showing up and eventually gave her life to Christ. “They really care about you. They push you forward to keep knowing who Jesus is and doing the right things.” 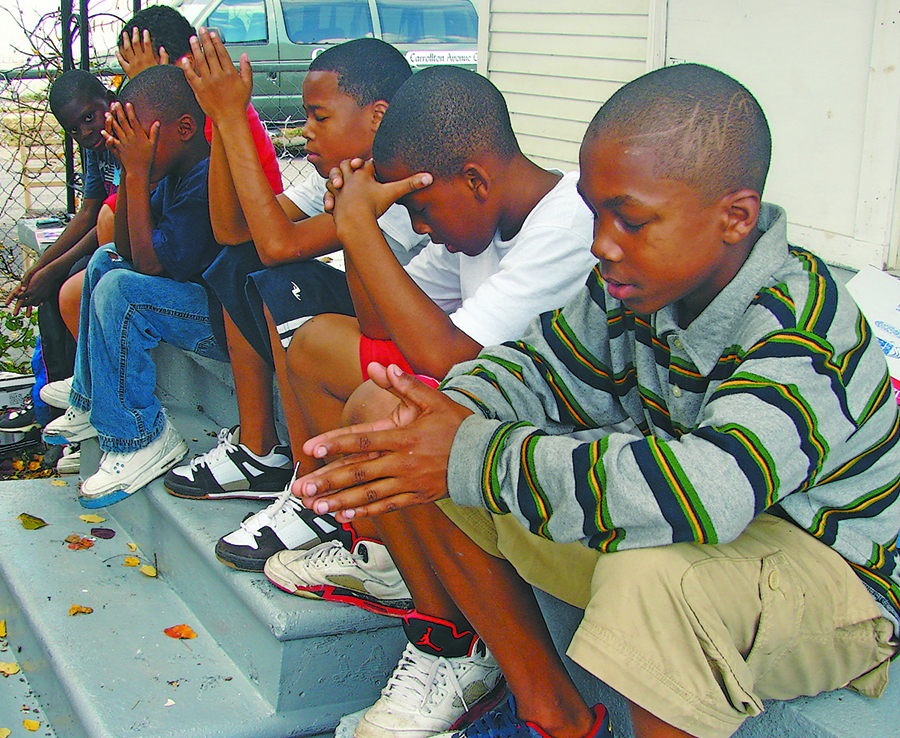 In 2008, boys pray during a front-porch Bible study in the Hollygrove neighborhood of New Orleans. Some of the children involved in the original study have become Christians and remained faithful, while at least one ended up in prison. Terrance Clark, at the far end in the group photo, was baptized recently. (PHOTO BY BOBBY ROSS JR.)

For more than two years after Katrina, the old Emanuel Spiritual Church — a small, red-brick church building in Hollygrove — sat rotting and abandoned. 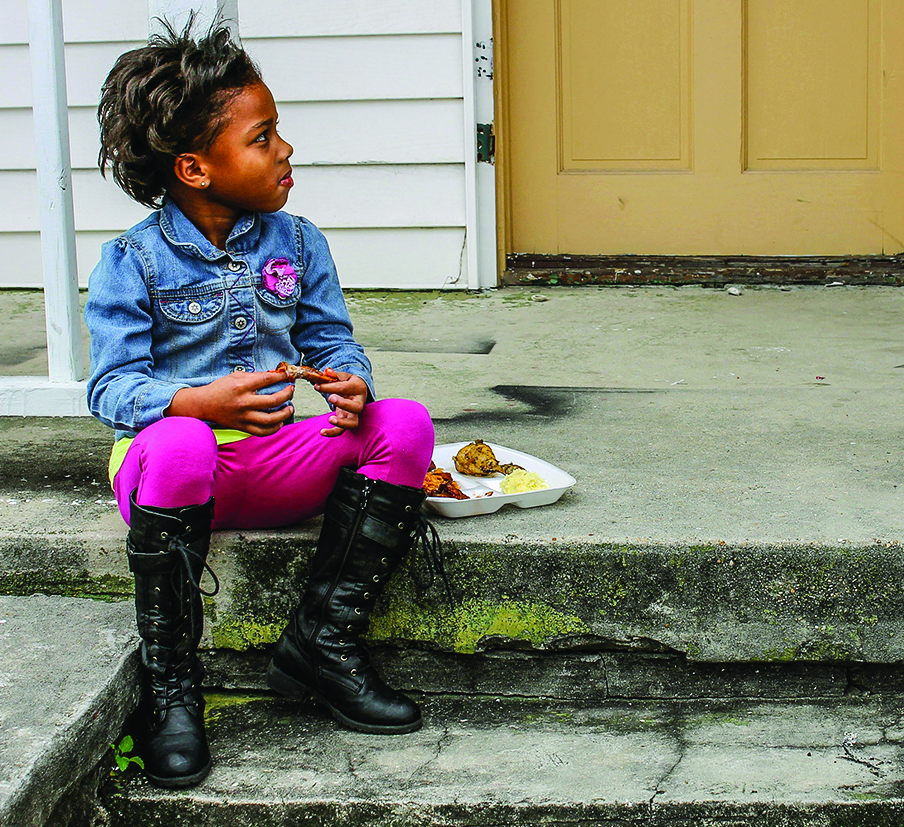 Shakayla Honor eats during a fellowship meal after a Sunday assembly celebrating the Hollygrove church’s fifth anniversary. (PHOTO BY BOBBY ROSS JR.)That is, until the Marsalises and leaders of the Carrollton Avenue church — still rebuilding itself after sustaining extensive hurricane damages — saw the “For Sale” sign.
The Carrollton Avenue church really couldn’t afford to buy a second building 10 minutes — and a world — away from its own, minister Kirk Garrison said.
“Yet our elders stepped out in faith and took on this work in a dark and difficult part of New Orleans,” he said.
The church plant is just one of many doors that God has opened since Katrina, Carrollton Avenue elder Robert Carpenter said. 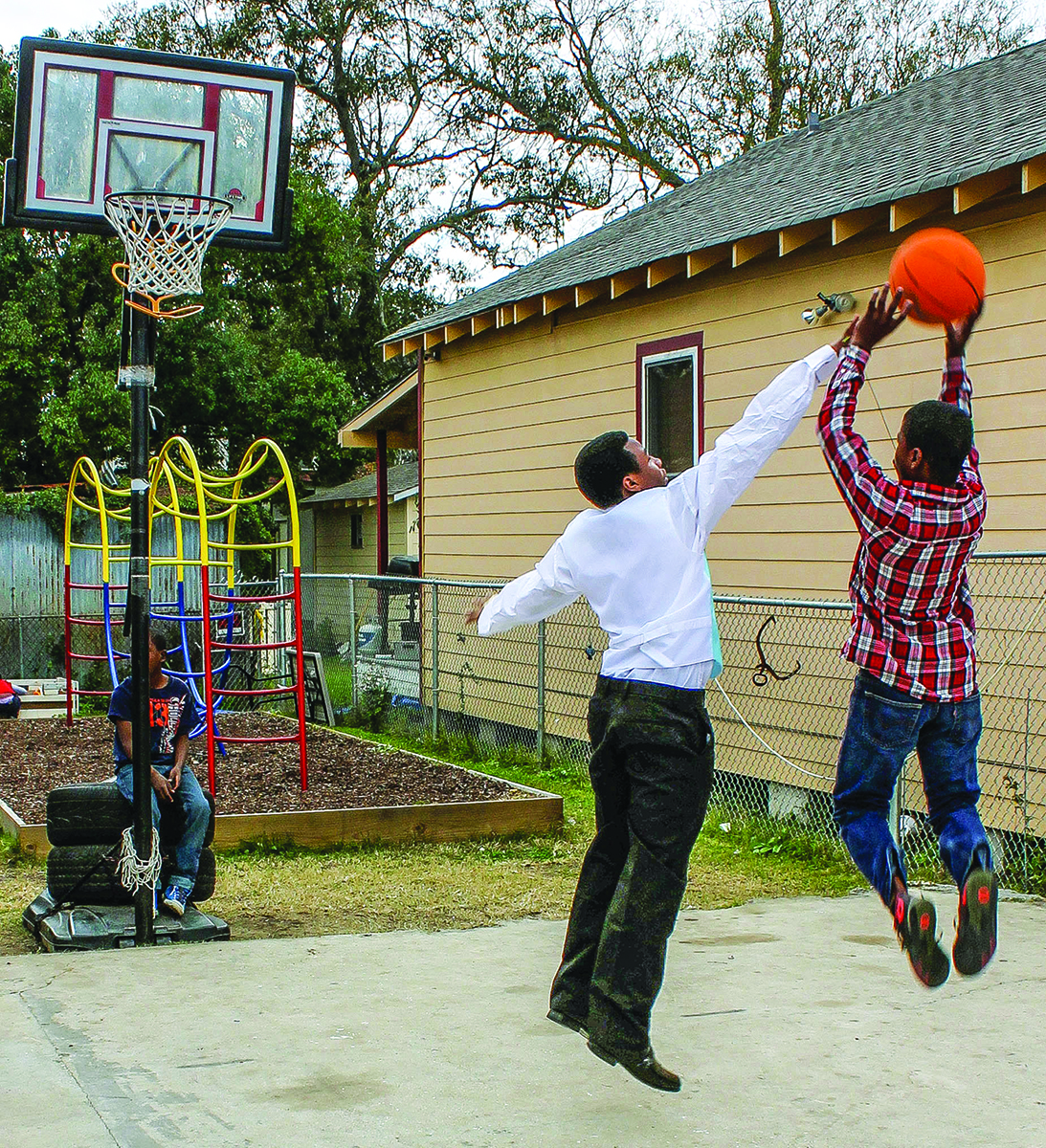 Chantz White shoots as August Marsalis, still in his Sunday best, tries to block him. (PHOTO BY BOBBY ROSS JR.)Among other outreach efforts, the Carrollton Avenue church has expanded a summer camp for inner-city kids, hired Xander Waites to serve as an “urban missionary” in bars and coffee shops and launched a Celebrate Recovery program to help people struggling with addictions.
“Many times in the past, we may have been afraid to go through those doors,” Carpenter said. “But especially since the storm, we’ve had more and more faith that God’s going to provide for us.”
It took four years, but church members from across the nation “gutted” the small Hollygrove church and two adjacent houses and completely rebuilt them, Garrison said. One of the houses provides classroom and fellowship space, while the Marsalises live in the other. 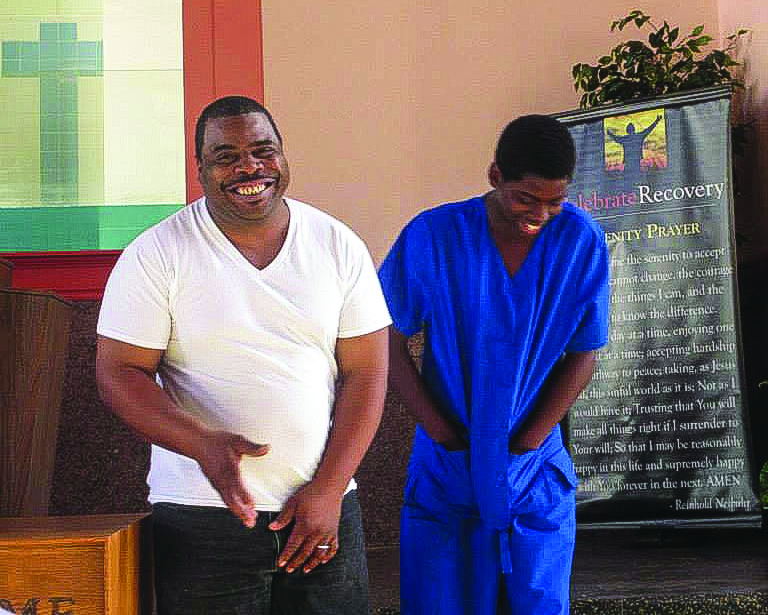 Charles Marsalis and Terrance Clark enjoy a laugh before the minister takes the teenager’s confession. (PHOTO PROVIDED BY HOLLYGROVE CHURCH)The Hollygrove church has become a hub of activity in the neighborhood, offering after-school tutoring and welcoming children to shoot hoops behind the building.
“I don’t know what it is about that basketball goal, but it has been a serious blessing,” Charles Marsalis said. “When it starts getting dark, I have to run them off, but they don’t want to leave.”
August Marsalis, one of Charles and Angela’s four adult sons, leads a Wednesday night singing practice that draws between 15 and 25 young people each week. They eat pizza and practice new hymns for the Sunday assembly.
Carrollton Avenue minister Patrick Bowman organizes a Thursday night teen Bible study in Hollygrove. Then he loads up the church van to take a group to play basketball at a nearby gymnasium.
Women from the Carrollton Avenue church mentor Hollygrove girls through a “Rubies and Jewels Ministry,” which Angela Marsalis said involves “tea parties and other girly things.”

Patrick Bowman, front center, is one of the ministers of the Carrollton Avenue Church of Christ — the New Orleans congregation that sponsors the church plant in Hollygrove. (PHOTO BY BOBBY ROSS JR.)

The church grows, the Marsalises said, as parents and other adults see the transformation in neighborhood children eager to declare that they “know Jesus.”
Next up: possibly knocking out one of the church walls and expanding the auditorium — a project that would mean raising an additional $160,000.
But whether that happens depends entirely on God, the Marsalises said.
They’ve given up plotting their own path — or the church’s.
“We don’t know what plan God has for this church,” Charles Marsalis said with a smile. “Wherever he’s taking it, we just want to hold on to his coattail.”

“We don’t know what plan God has for this church. Wherever he’s taking it, we just want to hold on to his coattail.” Charles Marsalis