Over the next week, they'd endure a nightmare that would test their faith.

Bobby Ross Jr.
Editor-in-Chief
NEW ORLEANS — “Girl, you better get out of town!”
Angela Marsalis’ mother made clear what she thought her daughter should do that weekend as Hurricane Katrina — a Category 5 storm packing 160 mile-per-hour winds — threatened a direct hit on New Orleans.
In a perfect world, Angela — a substitute teacher who helped each day with an after-school program at church — would have done exactly as her mother urged. She, her husband, Charles, and their boys would have joined the clogged procession of vehicles fleeing the tempest predicted to make landfall Monday morning.
But Charles — who worked 12-hour days on a tugboat yet still volunteered most mornings at a Christian outreach center — had just spent $2,000 to fix the family’s blue 2000 Dodge Caravan, wiping out their bank account.
Jittery over the calamity that could befall the bowl-shaped metropolitan area, Angela begged her husband: “Let’s go! Let’s go! Let’s go!”
But her practical side knew they lacked the cash to keep their gas tank full. They simply could not afford to heed the mayor’s mandatory evacuation order.

Leaving the church in the boat, the group viewed the utter devastation for the first time: Houses torn apart in every direction. Oily lakes where streets used to be. Worst of all, bodies floating in the water.

Approaching the bridge from a distance, Angela saw what looked to her like a giant sea of ants. Hundreds of evacuees — hot, hungry and angry over their treatment — stretched across the bridge. Some had been there for days.

Angela tried to lighten the mood, joking that she needed to put on makeup before joining the crowd on the bridge. Still, she found the scene difficult to stomach. Sick, elderly people in wheelchairs and babies in need of formula baked in the unrelenting sun. 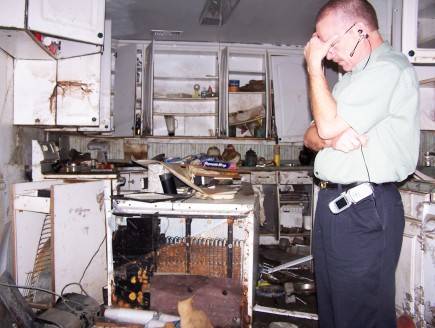 MANDEVILLE, La. — In the aftermath of Hurricane Katrina, the…