After Hurricane Katrina, Bible studies on a flood-damaged home’s porch led to the planting of the Hollygrove Church of Christ. That congregation just turned 10 years old.

All around them were colorful balloons marking the 10th anniversary of the Hollygrove Church of Christ — a congregation just a little younger than many of them, born after the horrible destruction of Hurricane Katrina in 2005.

In a neighborhood plagued with gunfire, drugs and prostitution, a transformation has taken place at the corner of Fig and Cambronne streets. Over the last decade, this budding congregation has progressed from a front-porch Bible study to a body of believers that outgrew its original auditorium. 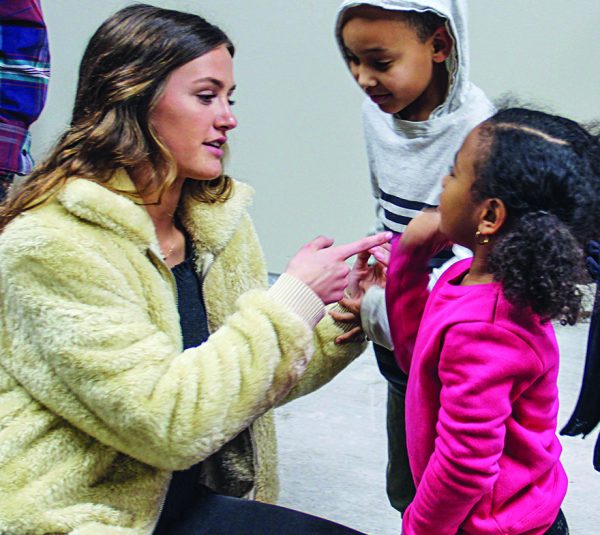 Shining the light of Jesus here are dedicated Christians from near and far — those who returned to their beloved city post-Katrina to help coordinate rebuilding efforts and others who travel to offer their support and encouragement.

On this weekend, many who love this church gathered in Hollygrove’s recently expanded building to celebrate its first decade and ask God to bring more souls to the Lord in the next.

That remodeling, necessitated by growth, doubled the seating capacity from roughly 80 to 160.

“When you’re going through the storm, you don’t really get to see the vision of what God has in store.”

Belting out hymns such as “How Great Is Our God” and “Here I Am to Worship” was Willie Marsalis — an aspiring minister who was just 13 years old when the Category 5 storm struck his hometown.

“When you’re going through the storm, you don’t really get to see the vision of what God has in store,” said Marsalis, now 27 and preparing to attend seminary. “But, of course, Katrina brought this amazing work in the community.” 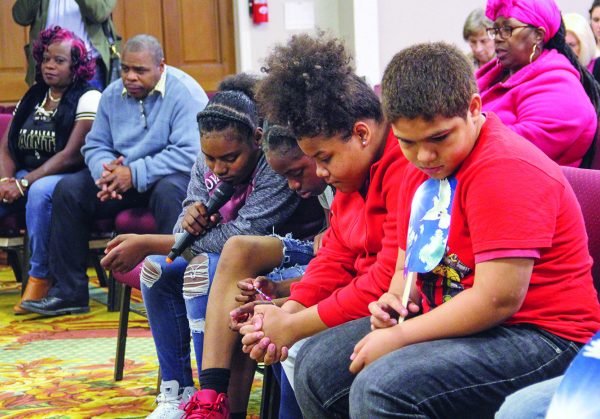 Children bow in preparation for a prayer led by Robert Carpenter, elder of the Carrollton Avenue Church of Christ in New Orleans, during a special Saturday night singing assembly marking the 10th anniversary of the Hollygrove church.

An answer to prayer

Hollygrove is a satellite church of the Carrollton Avenue Church of Christ, a middle-class congregation — 10 minutes and a world away from Hollygrove — that delayed its own hurricane repairs to invest in the church plant.

Expanded version of this story: Big mission in the Big Easy

“This nucleus needed to be nurtured and developed,” Carrollton elder Robert Carpenter said, explaining the 83-year-old congregation’s desire to help not only with physical needs but also with spiritual renewal in Katrina’s wake. 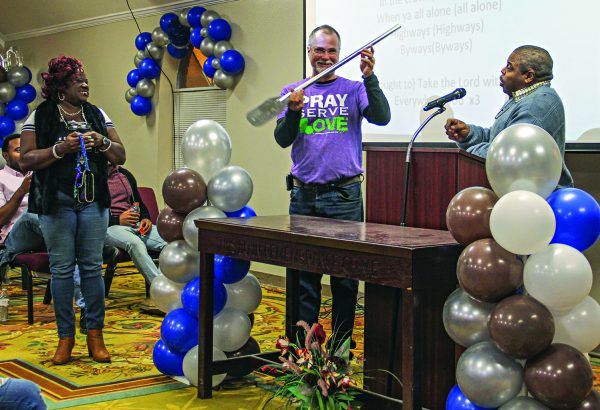 Kirk Garrison gives Charles Marsalis a crawfish paddle with his name engraved on it as a 10th anniversary gift.

That meant when temperatures soared, Carrollton Avenue made do with window air-conditioning units that blew hot air and dripped water into five-gallon buckets in its unfinished education wing.

“But instead of asking the question, ‘What about our building?’ I can still remember one of the ladies saying, ‘Well, what can we do to help Hollygrove?’” Garrison said. “That’s the heart of the congregation.”

In the dark days after the hurricane, a van full of church leaders — some from the New Orleans area, others representing out-of-town disaster relief ministries — drove around the beleaguered city and surveyed the mountains of debris in every direction.

“At different points, we stopped and prayed about what God was going to do,” said Mike Kellett, lead minister and an elder of the White’s Ferry Road Church of Christ in West Monroe, La., roughly 300 miles northwest of New Orleans. “One of those places was Hollygrove.

“At different points, we stopped and prayed about what God was going to do.”

“Now, to see a church here is exciting,” added Kellett, whose congregation provides financial support to the Hollygrove congregation. “It’s been a great partnership here with a lot of people.”

For years, Jerry Freed, his wife, Carmen, and their children, Vail, 18, and Vann, 15, have made an annual mission trip to New Orleans with their home congregation, The Park Church of Christ in Tulsa, Okla.

“We’ve fallen in love with the people here,” Carmen Freed said of Hollygrove. 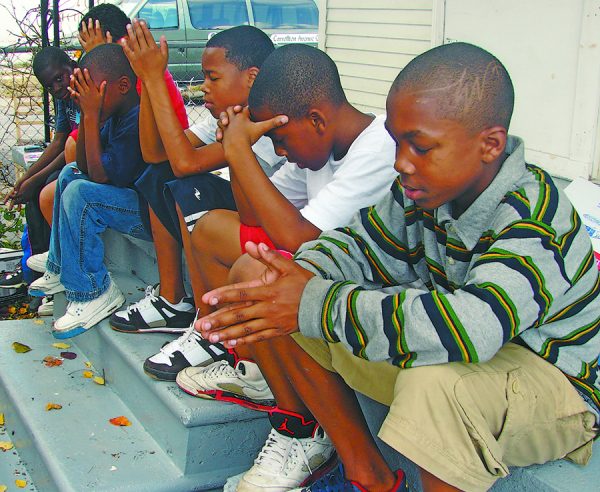 In 2008, Ishmel Wiltz, right, and other boys pray during a Saturday morning Bible study on a flood-damaged home’s porch in New Orleans.

It all started on a porch.

After Katrina, Charles and Angela Marsalis — Willie’s parents — offered Bible studies for boys and girls on the front porch of a relative’s flood-damaged home, serving snacks and soft drinks in return for the young people’s attention.

Eventually, those studies led to the 2009 launch of the Hollygrove congregation, which meets in a refurbished church building that sat rotting and abandoned after Katrina. 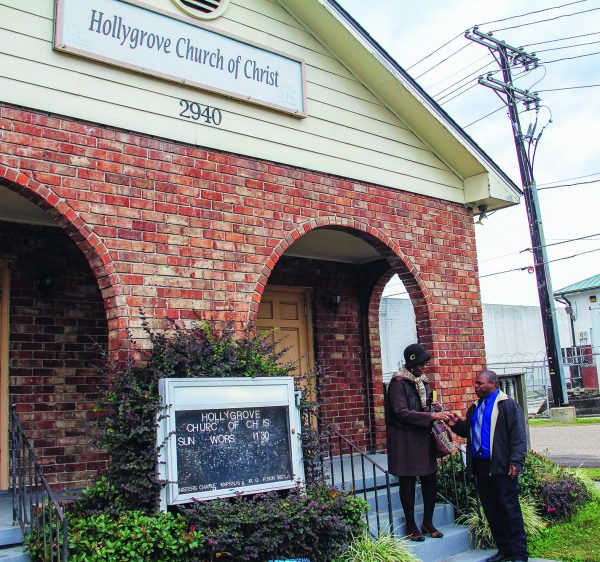 “As I look around the building, I’m just humbled that God could use a nobody like me to be a part of his work,” Charles Marsalis told the crowd at the anniversary celebration.

As Katrina raged toward New Orleans in 2005, the Marsalises sought shelter at the Carrollton Avenue church, their home congregation.

When floodwaters propelled by broken levees kept rising inside the stout brick building, the family escaped to the church’s balcony.

“It was supposed to be a one-night camping day at the Carrollton building,” Willie Marsalis recalled. “It turned out to be a week of calamity.”

From that calamity, though, the Marsalises emerged with a strong-willed determination to share Jesus in their devastated community.

Through it all, they’ve experienced highs (such as Academy Award-winning actor Morgan Freeman filming a segment on the Marsalises’ experience for the 2016 television series “The Story of God”) and lows (including the 2017 neighborhood shooting death of 19-year-old Gregory Hawkins just minutes after he served communion at Hollygrove).

“There’s so much darkness out here.”

“There’s so much darkness out here,” Angela Marsalis said. “So whatever light we can bring, that’s my goal. … Satan is just — sometimes, I just think that he’s too busy. Sometimes, I feel like he’s winning, and I’ve just got to pray that much harder and serve that much harder. 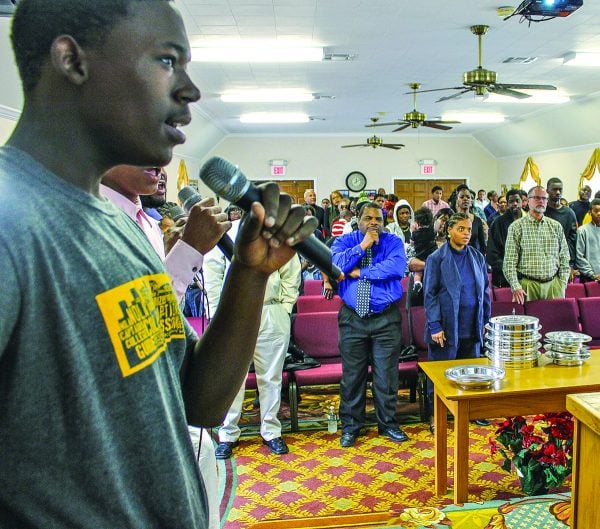 In 2014, Gregory Hawkins, with the microphone, sings during the Sunday morning assembly of the Hollygrove church. Charles Marsalis, with the tie, can be seen on the front row.

In 2005, leaving the Carrollton Avenue church in a rescue boat, the Marsalises witnessed the full extent of Katrina for the first time: Houses torn apart. Oily lakes where streets used to be. Worst of all, bodies floating in the water.

Hundreds of evacuees — hot, hungry and angry over their treatment — stretched across a bridge. Some had been there for days.

When the Marsalises didn’t know how the story would end, when they feared they just might melt away on a crowded overpass, a frustrated Charles Marsalis prayed that God would save him — or not.

Eventually, a helicopter plucked the Marsalises from the bridge. With New Orleans in chaos, they relocated temporarily to Nashville, Tenn.

But the need for spiritual renewal in Hollygrove beckoned them home. 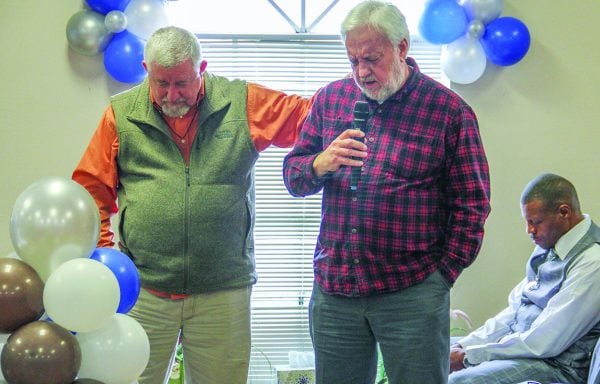 Robert Ables, right, from the White’s Ferry Road Church of Christ in West Monroe, La., prays during the anniversary event. At left is Mike Kellett.

Over the last decade, the church has brought hope — not to mention crawfish boils and fish-fry fellowships — to a neighborhood that desperately needs it.

Charles Marsalis witnessed a murder in Hollygrove when he was 12. He recalled how one longtime resident responded when he knocked on her door to tell her about the new church.

“Son, I wouldn’t plant no church over there,” she told him. “You know they’ve got drug dealing and prostitution and crime going on?”

“You just gave me the reason I should be here,” he responded. 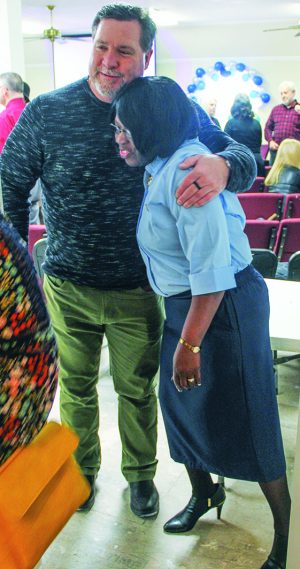 Patrick Sweeney from The Park Church of Christ in Tulsa, Okla., hugs Joyce Marsalis at the anniversary event.

Ten years later, Charles Marsalis said he remains committed to fulfilling God’s will in his life: “Every morning when I get up, I say, ‘Lord, what are we doing now? What do you got for me today?’”

His two youngest sons — who were just teens when Katrina hit — have become integral to the ministry.

August, who was 15 at the time of the hurricane, said he tries not to focus on the negatives of Katrina, even though many of his friends fled New Orleans and never returned.

“A lot of times when we see the kids, we see ourselves — our former selves,” he said of the children served by the Hollygrove church. “I don’t ever see it as a struggle, even after losing Greg.

“If anything, it just invigorates me more to make sure that throughout their lives, they know that we’re here and that we love them.”

“We needed someone from this area who wasn’t afraid to stay,” Walden said. “They stuck it out, and they’re here, and everyone knows it. So just their presence in the area makes a big difference in how people perceive the church.” 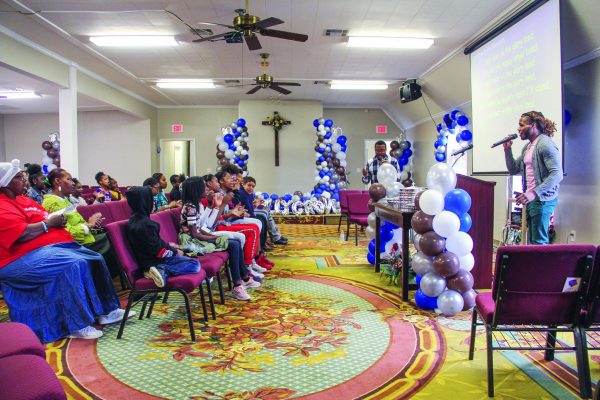 Willie Marsalis, right, and his brother August Marsalis lead singing during the 10th anniversary celebration of the Hollygrove Church of Christ in New Orleans. Willie and August were teens when Hurricane Katrina struck in 2005.

Willie Marsalis finished his bachelor’s degree in hotel, restaurant and tourism administration at the University of New Orleans only to determine that God has a different plan for him: full-time ministry.

God is “using us however he wants, and we’re willing.”

“I was like, ‘I could go into my career, but I would have to abandon the kids,’” Willie said of the Hollygrove youth group. “There’s about 15-plus youth, and it’s still growing, so it’s a blessing. I just need to get as many kids as I can into the house of the Lord.”

Every step of Hollygrove’s journey, God has made his grace and mercy evident, Willie said.

“His hand is over Hollygrove,” he said. “He’s using us however he wants, and we’re willing.”