When Brenda Jones took the oath of office for her brief tenure in the U.S. House, her first words related to her faith.

“Mr. Speaker, let me start out by saying, ‘To God be the glory.’ I want to thank God for giving me this great opportunity,” the 59-year-old Michigan Democrat recalled telling former House Speaker Paul Ryan. 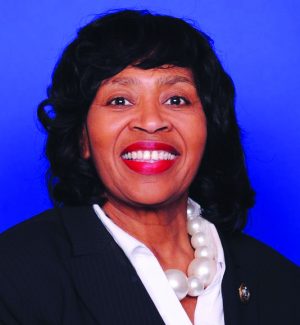 A member of the Wyoming Avenue Church of Christ in Detroit since 1967, Jones served the final five weeks of longtime Rep. John Conyers Jr.’s unexpired term. Conyers, a civil rights icon first elected in 1965, resigned amid an onslaught of sexual harassment allegations.

“I know that in my political life God has carried me,” said Jones, who has returned to her former role as president of the Detroit City Council.

“My faith is a strong faith in believing that the things that I have gotten, it’s not about Brenda — it’s about God giving me the opportunity,” she added. “I don’t call myself a political person. I call this my ministry to be able to help and assist the people.”

Jones won a special election to fill the remainder of Conyers’ term. However, she narrowly lost a separate Democratic primary for a full two-year term to Rashida Tlaib, a Michigan state representative who ultimately became one of the first two Muslim women ever elected to Congress.

But given that Jones came within a percentage point of defeating Tlaib, some wonder if she’ll challenge the incumbent in 2020.

“People have asked me to run for Congress again,” Jones told The Christian Chronicle. “Right now, I’m concentrating on the job that I’m doing as Detroit City Council president.”

“I’m glad we worked it all out,” Speaker Paul Ryan told Brenda Jones at her ceremonial swearing in today. #MI13 pic.twitter.com/7c6AH6LlGf

Jones, a Detroit council member since 2005, broke more than 100 years of U.S. House precedent by serving simultaneously as a member of Congress and as a local elected official, The Detroit News reported.

“She’s very strong in terms of her beliefs and her principles.”

That same newspaper noted that Jones took her short-lived role in Washington seriously, casting about 77 votes in the House and introducing two bills — one about affordable housing and the other targeting states that reduce the minimum wage.

Jones also spoke on the House floor a few times, including once to honor Dallas A. Walker Jr. for 45 years of service as minister for the Wyoming Avenue church.

Walker, whose congregation averages Sunday attendance of about 350, said he appreciated the gesture.

“Brenda Jones, she’s a very sincere person,” the minister said. “She’s very strong in terms of her beliefs and her principles. She’s a person who works well with others, and she’s flexible, but she absolutely does not compromise when it comes to her principles and things of that nature.”

In 2015, Motor City honored Walker by naming a portion of Wyoming Avenue in his honor.

“This dedication is historic, as this is the first street in the City of Detroit with a secondary street named for a Church of Christ minister,” Jones said at the time. “Brother Walker has led Wyoming Avenue Church of Christ admirably for over 40 years, so this honor is very well deserved.” 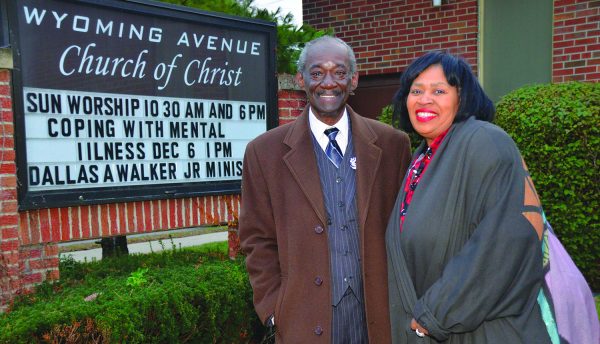 Brenda Jones, with minister Dallas A. Walker Jr., at the Wyoming Avenue Church of Christ in 2015.

After her telephone interview with the Chronicle, Jones was heading to a news conference on fighting human trafficking.

“Through my faith and through being a Christian, I’ve learned to treat all people the same no matter where they are or what they are doing,” Jones said.

“So many of our young women, as well as some men, have gotten out there and gotten into wrong situations and become involved in human trafficking,” she added. “I’m working to do as much as I can to save lives.”