All three U.S. House representatives who are members of Churches of Christ support President Trump.

As a Christian, U.S. Rep. Brett Guthrie worships with a bilingual congregation that shares the Gospel with Spanish speakers and feeds the hungry without concern for immigration status.

As a congressman, the Kentucky Republican points to a definite “crisis at the border” and supports President Donald Trump’s push to build a $5.7 billion wall separating the United States from Mexico.

The 54-year-old politician sees no conflict in his dual roles.

“I heard somebody say the other day, ‘We all have to have a heart for what’s going on at the border, but we also have to have a plan,’” Guthrie told The Christian Chronicle.

The six-term House member is one of three U.S. representatives who are members of Churches of Christ. The other two are freshman lawmakers: Rep. Lance Gooden, R-Texas, and Rep. John Rose, R-Tenn.

Both newcomers were elected in Trump-friendly districts after promising to fight illegal immigration. 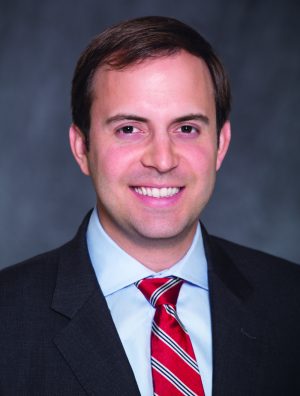 “I believe that we have to protect the country, and we can still do that and be compassionate to folks,” said Gooden, 36, a member of the Rockwall and Brin Church of Christ in Terrell, Texas, east of Dallas.

“But we’ve got to make sure that we’re protecting our borders and taking care of our citizens first,” he added, as the weeks-long federal government shutdown that began Dec. 22 dragged on. “It’s the biggest issue in my district back home.”

America is “a country of immigrants,” said Rose, 53, a member of the Buffalo Valley Church of Christ in Middle Tennessee.

“We have accepted people from all around the world, allowing them to escape from oppression,” he said. “I think of Christians in the Middle East that have been oppressed in recent years.” 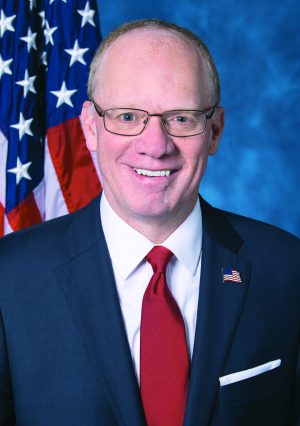 However, the nation has clear-cut immigration laws that must be respected and enforced, said Rose, who — like Guthrie and Gooden — pledged to forgo his congressional salary during the impasse over the border wall’s funding.

To change those laws, the Tennessee representative added, “We have a well-defined process.”

But former Rep. Brenda Jones, D-Mich., a member of the Wyoming Avenue Church of Christ in Detroit, criticized the shutdown that started during her brief tenure in Washington.

“While I support safe, secure borders, in my district there are many people who desire a pathway to citizenship,” said Jones, 59, who served the final five weeks of longtime Rep. John Conyers Jr.’s term after his resignation over sexual harassment allegations. “We must also protect the human rights of children who are forced into immigration courts as young as 2 years old without legal representation.”

“I’m glad we worked it all out,” Speaker Paul Ryan told Brenda Jones at her ceremonial swearing in today. #MI13 pic.twitter.com/7c6AH6LlGf

Feeding the hungry ‘no matter what’

The Latino ministry of the University Heights Church of Christ in Bowling Green, Ky., drew Guthrie to the downtown congregation, just a few blocks from Western Kentucky University.

“We wanted to give her some opportunity to reach out,” the congressman said of his daughter, a student at Northwestern University in Chicago. “When she’s home, she actually attends the Spanish worship, which is really nice. She’s that fluent in it.”

At the church, Brett Guthrie is known as a kindhearted servant of God, leaders said.

“He is a very dedicated, committed young man,” minister Bob Raby said. “He attends church every time he’s in town. He participates in the worship service when he’s here, leading prayers and doing other things as well.”

Related: Furlough and prayers for the unspoken

The Spanish and English speakers meet separately most Sunday mornings. But the fifth Sunday morning of each month and every Sunday night, they join together to sing, pray and study the Bible in both languages. 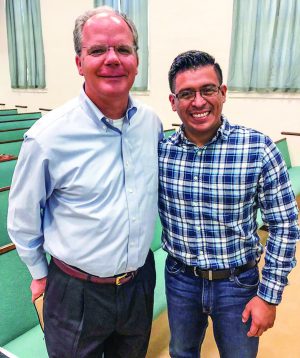 A typical Sunday brings a combined crowd of about 65 souls, many of them immigrants and refugees, including a sizable contingent of Cubans, Raby said.

Luis Betanco, a native of León, Nicaragua, and a graduate of the Baxter Institute, a ministry training school in Tegucigalpa, Honduras, preaches for the Latino group.

Betanco said the church has a food pantry that serves the poor regardless of whether they have proper government paperwork.

“We feed them no matter what because that’s what Jesus told us to do,” he said. “I’m trying to do my best. We need to love them, care for them. And I believe, when we expose people to the Gospel, they will figure it out: ‘I’ve been doing something wrong. I better fix my status or go back home.’”

Betanco; his wife, Claudia; and their two children, Daniel, 12, and Santy, 6, received legal authorization to move to the U.S. in 2012. 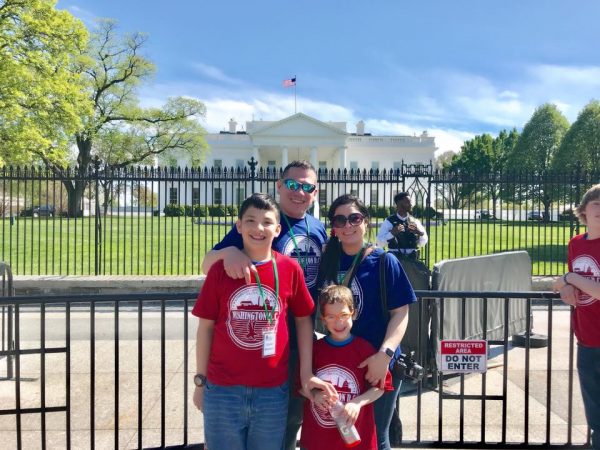 The Betanco family, who immigrated to the U.S. from Nicaragua, visits Washington, D.C.

“He’s a humble man, really welcoming,” Betanco said of Guthrie, “and he and his family help the community not only as a congressman but as a Christian. His family, they have a company that employs a lot of Latinos, as well.”

Trace Die Cast, an aluminum manufacturing company founded by Guthrie’s father, Lowell, in 1988, has hired a significant number of refugees, according to a public radio report in 2017.

Related: They are friends in Congress — and brothers in Christ

“The General Motors and the Fords and the GEs, you know they brought in immigrants, and they had great internal programs to train and to also do apprenticeship programs,” Chris Guthrie, the company’s president and the congressman’s brother, told NPR’s local affiliate. “So we started doing the same thing and really worked with the local refugee center to incorporate new immigrants.”

A ‘great help’ in Nicaraguans’ asylum

After more than six years in the U.S., Betanco said he understands concerns over the nation’s estimated 11 million undocumented immigrants.

The Latino minister said Guthrie has no problem with legal immigration and even sent a supportive letter to help two of the Betanco family’s relatives escape the civil unrest in Nicaragua last year.

“They’re in the process of getting permanent asylum — a long process,” Betanco said of his wife’s nephews. “I would say he (Guthrie) was a great help to us.”

For his part, Guthrie said he believes in following U.S. law the way he does the Bible — as written.

“There needs to be a system in place.”

“We just can’t have emergencies at the border and all kinds of chaos,” he said. “We have to have a system where people who are truly in refugee status, who are fearing for their lives, have the opportunity to come here.

“But they can’t just come here as a group and move through, like a caravan. There needs to be a system in place.”