Even with veteran congressman's retirement, that's the most in recent memory and perhaps ever.

In 2005, a freshman congressman named Ted Poe drove his gaudy Jeep with 35-inch tires, six front floodlights and a bumper sticker proclaiming “Texas is bigger than France” to a White House meeting.

The colorful former state district judge, who earned his political science degree at Abilene Christian University in West Texas, joked that he “leaked a little oil on the president’s driveway.” 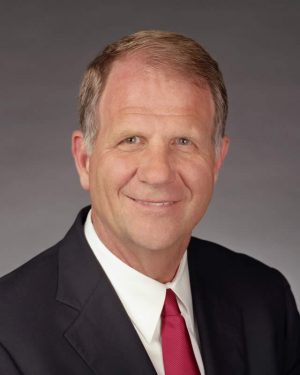 At the time, the Texas Republican was the only one of 435 U.S. House representatives who gave his religious affiliation as Church of Christ.

Poe, 70, a longtime member of the Bammel Church of Christ in Houston, didn’t seek an eighth two-year term in the 2018 midterms. He cited a desire to spend more time with his 12 grandchildren.

Nonetheless, the new, 116th Congress includes three members of Churches of Christ — the most in recent memory and perhaps ever, The Christian Chronicle determined.

“This happens to represent a greater percentage serving in the House than the percentage relative to the U.S. population,” said Neal Coates, a political scientist at Abilene Christian. “But it is also a reminder that from the local to the state to the national level, we need Christians and people of faith representing people and solving problems for this country.”

‘Faith on the Hill’

The U.S. has a population of about 325.7 million. The nation’s Churches of Christ have an estimated 1,442,285 adherents — comprising roughly one in every 226 Americans. That ratio would translate to two House members instead of three.

On the Senate side, John Cornyn, R-Texas, was a member of the University Avenue Church of Christ in Austin for many years. His press secretary did not respond to a request for information on his current church. A Pew Research Center report gives his religious affiliation as nondenominational Protestant.

Overall, 88 percent of House and Senate members describe themselves as Christians, according to the Pew report. However, the report’s specific designations of members’ religious affiliations, such as Baptist, Catholic and Presbyterian, make no mention of Church of Christ.

Faith on the Hill — The religious composition of the 116th Congress https://t.co/eI6MO2iczp pic.twitter.com/OQ2ZPqjX5D

The report, titled “Faith on the Hill,” characterizes Guthrie as a “Restorationist” because Pew categorizes Churches of Christ, along with the instrumental Christian Churches and the Christian Church (Disciples of Christ), as part of the broader Stone-Campbell Movement. The data comes from a survey by CQ Roll Call. 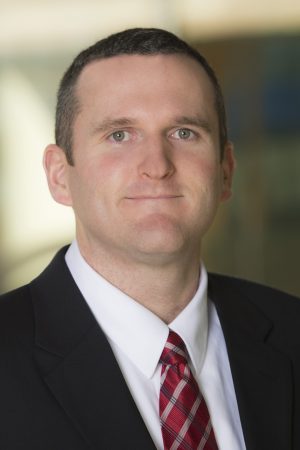 Gooden is erroneously described as a “Congregationalist” in the report because that’s how Pew labels members of the United Church of Christ, a liberal Protestant denomination.

“Unfortunately, I’m afraid I can’t say how he came to be listed as UCC in the CQ data,” said Gregory A. Smith, Pew’s associate director of research.

Meanwhile, Rose is classified as an “unspecified Protestant.”

“Rose is listed in the CQ data simply as ‘Christian,’” Smith explained. “Many members of Congress described their religion this way, and we categorize them all as Protestants whose denominational affiliation is unspecified.”

‘Where everybody knows everybody’

Guthrie, 54, attends the University Heights Church of Christ in Bowling Green, Ky. He and his wife, Beth, have three adult children: Caroline, Robby and Elizabeth. Caroline is married to Ryan Randolph.

A graduate of the U.S. Military Academy at West Point, N.Y., Brett Guthrie grew up in the Chisholm Hills Church of Christ in Florence, Ala. — a community with a heavy concentration of Churches of Christ. 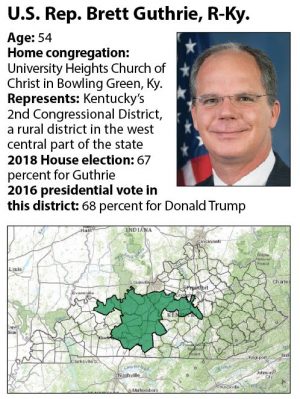 “I went to a congregation where everybody knew everybody,” he told the Chronicle in 2017. “It’s hard to distinguish between my church life and family life. It was all together.”

In Florence, it seemed like half the people attended one Church of Christ or another, Guthrie said.

“The Churches of Christ were just so embedded in everything,” he said of his early years. “The Little League coach might be your Sunday school teacher. Like anything with faith, it affects you in a positive way.”

Guthrie developed a close bond with Poe during their time in Congress together. The two worshiped at the Brussels Church of Christ during annual visits to the Belgian capital for the NATO Parliamentary Assembly.

“I hate to see him go,” Guthrie said. “We always did good things together. He’s a special guy. But he wants to get home and spend time with his grandchildren, which makes sense.”

However, Guthrie serves with two new House members with religious and political beliefs similar to his own. 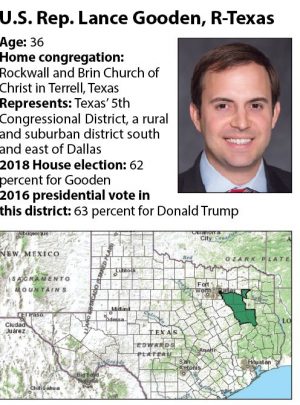 Both Gooden and Rose prevailed in conservative Republican districts that — like the one Guthrie represents — voted overwhelmingly for President Donald Trump in the 2016 election.

Gooden, 36, grew up in the Rockwall and Brin Church of Christ in Terrell, Texas, east of Dallas, and remains a member of that congregation.

“My faith is something that has guided me throughout my political career,” said Gooden, a former Texas state representative. He is married to Alexis and has a 1-year-old son, Liam.

Gene Glaeser, involvement minister for the Rockwall and Brin church, has known Gooden for 25 years. 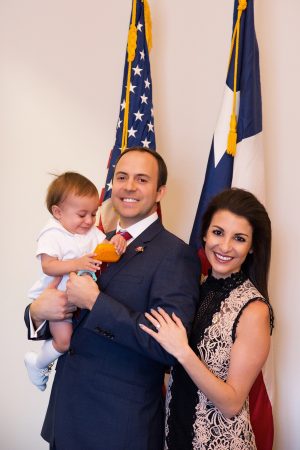 “He was about my size, and his mother said, ‘Do you have an overcoat that he could wear?’” Glaeser recalled. “And so he used my overcoat. … He was interested in politics at that time, so I said, ‘I’m looking forward to the day that you wear my overcoat to Washington as a congressman.’”

Gooden didn’t ask to borrow Glaeser’s overcoat for his recent swearing-in, but the congressman remains a favorite “adopted grandson” of the minister.

“He’s a very faithful Christian and has always stood up for Christian principles,” Glaeser said. “He’s our hometown boy, so to speak, for our church and for our town.” 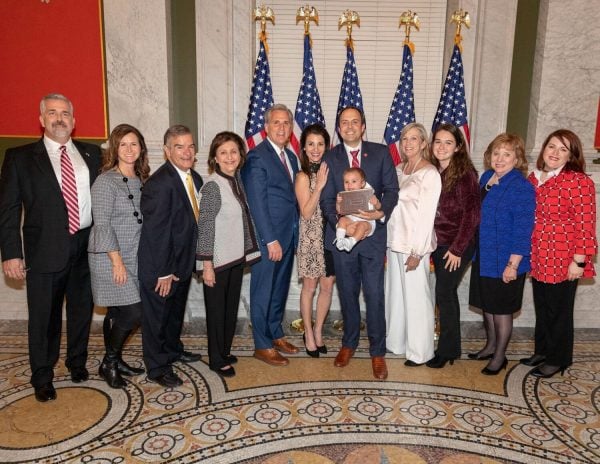 God’s plan, in life and politics

Rose, 53, a former commissioner of agriculture for the state of Tennessee, was raised Southern Baptist.

But while dating his future wife, Chelsea, a lifelong member of Churches of Christ, he began going to worship with her. 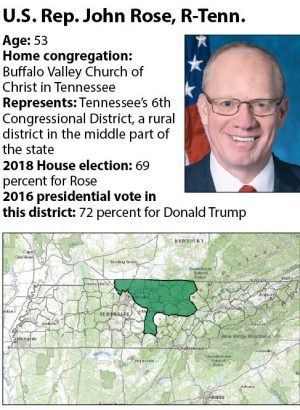 “Some of the times when I would take him to Churches of Christ were difficult … because every now and then, a preacher might actually single out other denominations,” Chelsea Rose said. “Even when you recognize that the Church of Christ may be God’s true word … when somebody starts disparaging the church you grew up in, that’s hard to hear.”

John Rose was in his mid-40s when he married Chelsea, who is younger. Neither had been married before.

They normally attend the Buffalo Valley Church of Christ, a rural congregation near the family farm where Rose grew up. It’s a 20- to 25-minute drive from their Cookeville home. When caring for their 1-year-old son, Guy, puts them behind schedule, they worship with the Jefferson Avenue Church of Christ, which is closer. 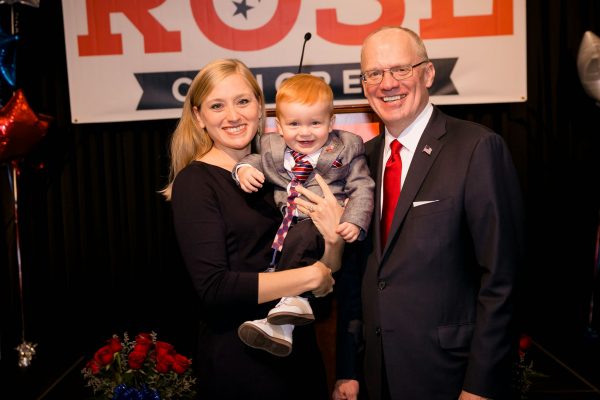 “Chelsea and I were both raised with the belief that we’re called to take the blessings that God gives us and use them to make things better,” Rose said, discussing how his faith informs his public service. 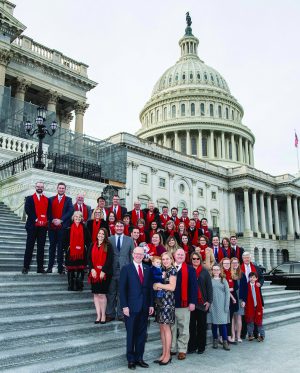 Rep. John Rose, R-Tenn., his wife, Chelsea, and their 1-year-old son, Guy, stand with family and friends on the steps of the U.S. Capitol.

“We don’t want to see the country, for the first time in history, pass along a nation that’s worse off than the previous one left to us,” he added.

Chelsea Rose said she’s biased where her husband is concerned.

“But I also know when he’s stupid as well, so I could tell you about that,” she joked.

Turning more serious, she characterized John Rose as a thoughtful person who is extremely modest about his Christianity.

He doesn’t want to “make a big grand noise” like the rich men who put their money in the treasury in the biblical story of the widow’s mites, she said.

“He never wants to come across as though he’s trying to be a show-off in his faith, sometimes to a fault,” Chelsea Rose said.

Related: Furlough and prayers for the unspoken

“He and I believe strongly that all our blessings come from God. And while we do things here and there to try and chart the course in our life — inevitably, it’s God’s plan that guides us to where we are and where we will go.”