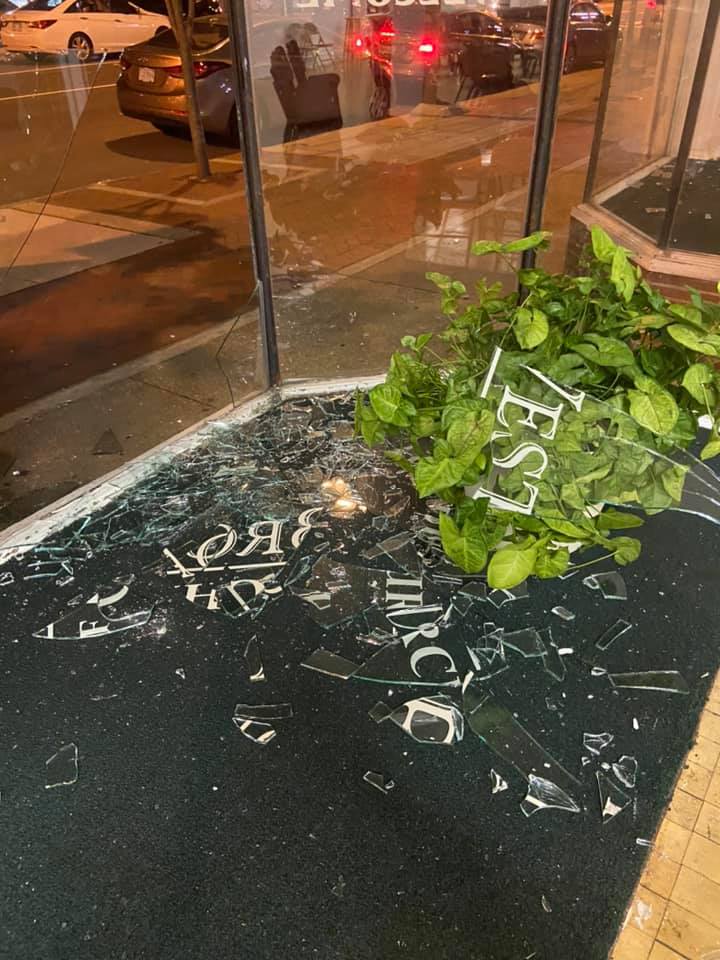 Minister says he understands the frustration but not the target.

A Virginia church’s building, in the heart of downtown Richmond, was just one of many structures damaged by rioters and protesters over the weekend.

“We’re more concerned with the personal damage than the physical damage — the souls of those who did the damage,” said James Nesmith, minister for the West Broad Church of Christ, a predominantly black congregation.

Nesmith was awakened at 3:42 a.m. Sunday by a call from the church’s alarm company. He got to the building about 30 minutes later to find the windows had been shattered.

In the early morning hours of May 31, 2020, several businesses in downtown Richmond were vandalized by rioters. The West Broad Church of Christ was one. Please pray for our city, our nation, and our world. #Amos524

Posted by West Broad Church of Christ in Richmond, VA on Sunday, May 31, 2020

Protesters were still walking around the area, as he surveyed the damage.

“Of course, we don’t condone the violence or looting,” Nesmith said. “We wish they would take a more civilized approach, but in the same breath, we understand the frustration.

Elsewhere, a fire at a Church of Christ in Little Rock, Ark., may be connected to demonstrations in the area, the Arkansas Democrat-Gazette reports. The fire at the Lewis Street Church of Christ reportedly burned through the roof in three places. Fire damage was also discovered around the door of the building.

Richmond, a minority-majority city of 227,000 people, is the Virginia capital.

Nesmith spoke with several of those who were still on the streets in those early morning hours. While one man was extremely angry, saying this is “a time for war,” Nesmith said most were apologetic about the damage.

“They all apologized as if they were the one who threw the brick and got caught,” he said.

While he doesn’t know why a church building would be targeted, Nesmith said he understands that when emotions are high, there is often a disconnect between anger and rational thinking. 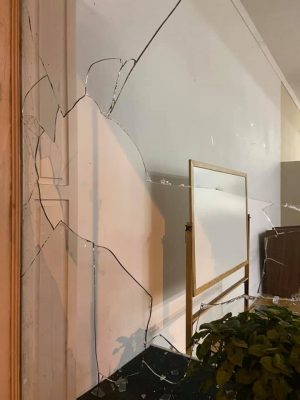 Windows at the West Broad Church of Christ were broken when protesters threw bricks through the glass early Sunday morning.

“The anger and frustration, they’re real,” he said, “Persons are feeling as if their voices are not heard.”

That frustration has sparked riots and protests across the country, following the death of George Floyd in Minneapolis police custody. In many cities, buildings were broken into, fires started and curfews implemented.

In Richmond, not far from the West Broad church, officials say protesters attempted to block firefighters from reaching a building that had been set ablaze. A child inside was inside and needed to be rescued. Fortunately, rescuers were able to get the child out of the building, but officials said protesters complicated the issue.

“Ladies and gentlemen, I think it’s time to say enough is enough,” Richmond Mayor Levar Stoney said in a press conference Sunday. “This must stop. This must end.”

“When you knock down windows of businesses that had nothing to do with this, you are not inspiring change. That’s an insult to the cause.”

Stoney, who is black, emphasized that the actions of those breaking windows and setting fires are not helping the cause.

“When you knock down windows of businesses that had nothing to do with this, you are not inspiring change,” Stoney said. “That’s an insult to the cause.”

A few hours later, in his Sunday morning address to the congregation, via a video on Facebook, Nesmith told members — most of whom are black — that the damage was an overflow of those voices.

Posted by West Broad Church of Christ in Richmond, VA on Sunday, May 31, 2020

“Replacing property is a small thing, but rebuilding or, should I say, building trust and building community and building an assurance that the promise of a nation will be extended to all people, particularly African American people, that takes time,” Nesmith said. “That’s where the heavy lifting is. That’s what we pray about, that’s what we’re working toward as we think about where our country is right now and where we dream about by the power of God where our country can be.”

Nesmith, who earned his doctorate from Harding School of Theology in Memphis, Tenn., is well-known in the community and with law enforcement. He said he has experienced bias and unfair treatment based on his skin color.

It’s something Nesmith said his white friends cannot understand without spending time talking with those in the black community.

“Just because you have black friends doesn’t mean that you understand the social structure that your black colleagues experience,” he said.

He gave an example.

“Just because you have black friends doesn’t mean that you understand the social structure that your black colleagues experience.”

“It’s hard for me to speak Mandarin Chinese because I’ve never learned it or had the experience where I needed to use it,” he said. “In order to understand, I have to immerse myself in that culture.

“It will take the same thing for our white brothers and sisters to understand.”

Nesmith does not hold any anger toward the persons who broke the windows of the church’s building. He said the church is insured and will replace them, once the streets are calm.

He doesn’t know how long that will take, but he said the answer doesn’t lie in politics.

“We, particularly as Christians, have to pick up the banner of righteousness and fairness and justice,” Nesmith said. “Government is incapable of giving us what the Kingdom of God gives us — leadership from the heart of God.

“The only way we will see a softening of racism in America is for people who have the heart of God to use that to do justice, love mercy and walk humbly with God,” he added, referencing Micah 6:8.

But without God as the center of the solution, he said, there will likely continue to be incidents of outrage followed by protests, Facebook discussions and then silence, which will only restart the cycle.