Members of Churches of Christ celebrate the life of Botham Jean, who was shot to death 23 days before his 27th birthday.

DALLAS — “Praise as protest,” declared the bold letters on the T-shirt that Ashley Hawthorne sported at the Dallas County courts building this weekend.

On a gloomy Saturday, clouds covered the tops of nearby skyscrapers and Dallas’ landmark Reunion Tower. Rain drenched Hawthorne as she stood without an umbrella on the steps outside the Frank Crowley Courts Building.

But Hawthorne and roughly 150 other Christians had come — on the day that Botham Jean would have celebrated his 27th birthday — to remember their fallen brother and call for justice in his fatal shooting by an off-duty, uniformed Dallas police officer.

The nasty weather failed to deter these members of Churches of Christ from their appointed mission: singing and praising God. 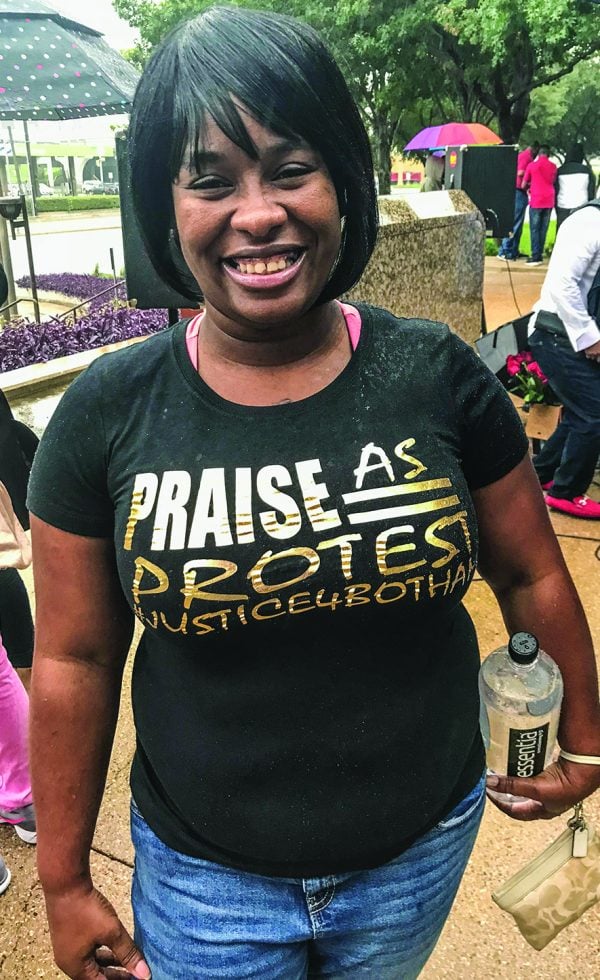 Lamont Ross, senior minister for the Marsalis Avenue Church of Christ in Dallas, prayed to God, “We can’t make sense of the senseless, but we come to you because we recognize the therapeutic value of praise.”

From Houston to Honolulu, members of Churches of Christ across the U.S. — and even beyond — came together on Jean’s birthday to raise their voices to heaven and show support for Jean’s family.

“We just want to make sure that we bring awareness to this situation and show the family love,” minister Frank Melton III said at Houston City Hall, surrounded by more than 100 Christians.

At the Pearl Harbor Church of Christ in Hawaii, minister’s wife Ruth Byrne said, “We stand in solidarity with his family.”

In Memphis, Tenn., the Sycamore View Church of Christ described its service remembering Jean as “a powerful display of unity, communal lament for injustice and a celebration of our dear brother in Christ.”

Our service for Botham Jean was a powerful display of unity, communal lament for injustice and a celebration of our dear brother in Christ.

Posted by Sycamore View Church of Christ on Saturday, September 29, 2018

At the Ina Road Church of Christ in Tucson, Ariz., black Christians shared with a mostly white audience their experiences of growing up in America.

“I truly hope this becomes a catalyst for bringing racial unity or at least racial collaboration in our divided brotherhood,” said Jessica Knapp, who is white and attended the Tucson discussion.

As part of a #Justice4Botham social media campaign organized by Williams, numerous Christians from coast to coast recorded videos of themselves singing “Let It Rise,” the last song led by Jean at the Dallas West Church of Christ, his home congregation. (Watch the videos.)

“Today is the opportunity for the Church of Christ and all those Botham impacted to say, ‘Hey, we love you, and we care about you,’” said Williams, a former Abilene Christian University football player who preaches for the North Colony Church of Christ, north of Dallas.

“We’re asking God for justice in this situation,” he added. “We are Christians, so we’re not seeking vengeance or revenge or destruction on anybody. But if I bump into your car, I’ve got to pay for that, right?” 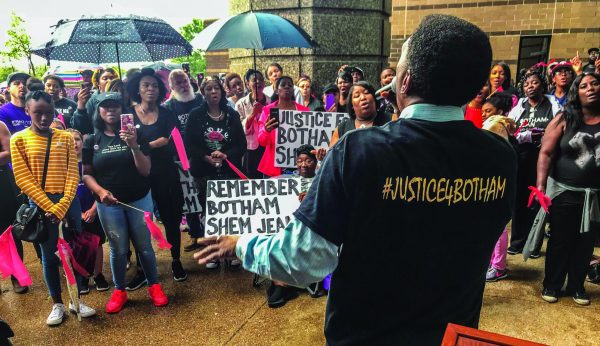 Officer Amber Guyger told investigators she mistakenly entered the victim’s apartment the night of Sept. 6, thinking it was her own. She then confused Jean with a burglar and opened fire, she reported.

Related: ‘Botham is singing with the angels’: Shooting victim remembered at prayer vigil

Guyger has been charged with manslaughter and fired from her job with the Dallas Police Department. The victim’s parents have expressed skepticism at the official narrative of what happened. The family plans to file a lawsuit against Guyger and the city of Dallas.

“We do want justice for Botham because we feel it’s unfair,” said Hawthorne, a North Colony church member who brought her 7-year-old daughter, Yaniya, with her to the Dallas event. “Everybody should be able to close their doors at night and feel safe in their home.” 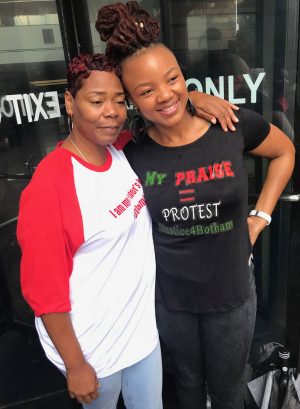 Another Dallas participant, Lydia Graves-Berkley, wore a shirt with the message “I am my brother’s keeper” above #BothamJean.

“I have a 23-year-old son myself, so this hit close to home,” said Graves-Berkley, a member of the Mountain View Church of Christ in Dallas. “My son is like Botham — innocent, young, kind, gentle. So we just have to start being more accountable for our brothers.

“God knows all and sees all,” she added. “So when it’s all said and done, I’m just praying that justice will be served, especially for his mother.” 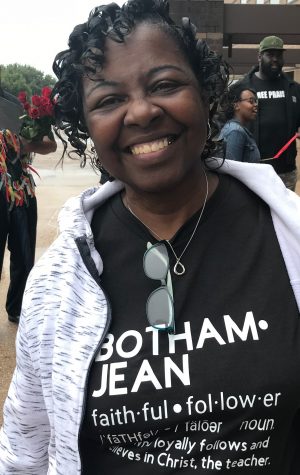 When Hynson’s son was in his late teens, police stopped him for no reason, she said. “And when they questioned him, he was actually drug where his knees were all bloodied,” his mother said.

“We believe in justice, and for me, what happened to Botham was a terrible injustice,” said Hynson, whose shirt described Jean as a “faithful follower” of Christ. “My heart just goes out to the family.”

Cody Chumbley, youth minister for the South Main Church of Christ in Weatherford, Texas, about 60 miles west of Dallas, brought his sons, Caden, 11, and Keaton, 8, to the Dallas event.

“Botham’s is a life worth celebrating,” Chumbley said. “We want to stand with our brothers and sisters around the world and fight for justice.” 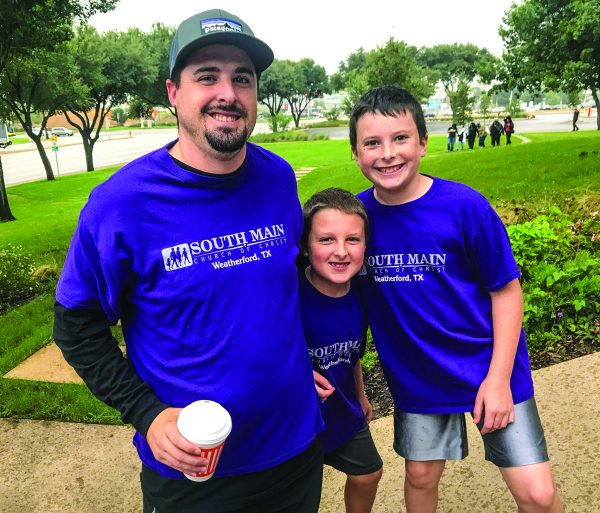 Michelle Rogers, a member of the Central Pointé Church of Christ in Dallas, made more than 100 red streamers — Jean’s favorite color — for the crowd to wave at Saturday’s gathering.

Posted by North Atlanta Church of Christ on Monday, September 24, 2018

‘Stand up for Botham’

Sammie L. Berry, minister for the Dallas West church, said he had just returned from Jean’s funeral in the Caribbean nation of St. Lucia. Jean grew up there before leaving at age 19 to attend Harding University in Searcy, Ark.

A standing-room only crowd filled a 2,000-seat Catholic church — the largest venue available — to pay their final respects to Jean, and others lined the streets, Berry said. (An earlier memorial service for Jean in Texas drew 1,500.)

Related: ‘Worship is our protest’

In honor of Botham Jean, on his birthday.

Even though no one would ever expect to be shot to death by a police officer in his own home, Berry said, “I know that where Botham is today, he has a big smile on his face, and he’s singing right along with us.”

Earlier in the week, more than 30 church leaders — mainly from Churches of Christ — attended a Dallas City Council meeting and “insisted that truth and justice prevail” in Jean’s case, said Jon W. Morrison, minister for the Cedar Crest Church of Christ in Dallas.

This morning, over thirty (30) local church leaders, primarily of Churches of Christ, stood in solidarity for our slain…

He urged the Christians to honor Jean’s memory by helping other people. 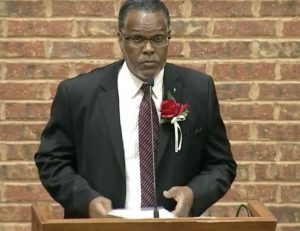 “When you see the homeless man on the side of the road … reach out and give him a helping hand,” Berry said. “And as you do, here’s what I want you to say: ‘Stand up for Botham.’

“And tomorrow, after you’ve had your Sunday afternoon meal, I want you to go to somebody and visit them in their hospital room,” he added. “And I want you to tell them to ‘Stand up for Botham.’

“Next week, I want you to see a young boy who’s cutting up in school, not obeying his mother, and I want you to talk to him and tell him to ‘Stand up for Botham.’”

In death, Jean has “brought young and old together, black and white together, rich and poor together,” said Willie Williams Jr., the Dallas organizer’s father.

The #Justice4Botham praise event began in the rain but ended an hour later with sunlight poking through the clouds.

“Thank you, Jesus!” a woman in the crowd shouted.

In death, Botham Jean has “brought young and old together, black and white together, rich and poor together.” #Justice4Botham