Creationist Ken Ham discusses his belief in a 6,000-year-old Earth, what might have happened if Noah ‘had swatted those two mosquitoes’ and why he views the Bible’s opening 11 chapters as so important.

EDMOND, Okla. — Ken Ham, a nationally known creationist who rejects Charles Darwin’s theory of evolution, made headlines recently when he was invited, then disinvited and finally reinvited to speak at a public university in Oklahoma.

The native Australian is the founder of the Ark Encounter — a $102 million, 800-acre Noah’s Ark theme park that opened in Williamstown, Ky., two years ago.

Ham, 66, serves as president of the Christian apologetics organization Answers in Genesis, which also owns the $27 million, 75,000-square-foot Creation Museum, west of the Cincinnati Airport in Petersburg, Ky.

Before his presentation at the University of Central Oklahoma on “Genesis, Science, and the Culture,” Ham sat down for an interview with The Christian Chronicle:

Question: Wikipedia describes you as an “Australian Christian fundamentalist and young Earth creationist.” Would those descriptions be accurate?

Ham: I wouldn’t take Wikipedia as the most authoritative source in the world. Just a lot of Wikipedia is wrong. The word fundamentalist today has some very negative connotations. I’ve seen myself classified as a Christian fundamentalist in the same sentence as an Islamic fundamentalist, and talking about terrorists and so on.

So, I take it naturally. That means if it’s history, it’s history. If it’s poetic, we understand it’s poetic. That doesn’t mean it doesn’t teach truth. So, I’m one who takes the Bible as the revealed word of God.

I mean, ultimately, the only way to determine the age of the Earth is if you were there and could recount it all. Now we weren’t there, but I would say there was someone who was, and that is the God who created things. And so, the only absolute age dating method that I know is the Bible. That God himself reveals to us that he created in six days, and day six he made Adam and Eve.

It tells us that Adam died when he was 930 years old, but it tells us that at 130 years, Adam had a son called Seth. And you can read these genealogies — when they had children, when they died, when they had sons and so on. And regardless of whether they skip a generation or two, it has dates for their ages, and you can add up all those dates, and it comes to about 6,000 years. …

So, if those days are ordinary days, then you’ve only got about 6,000 years. All the age dating methods that you can use to age date the earth from the Bible are fallible. I mean, there are hundreds of dating methods. Some get thousands of years and millions of years and everywhere in between, but they’re all based on assumptions about the past. 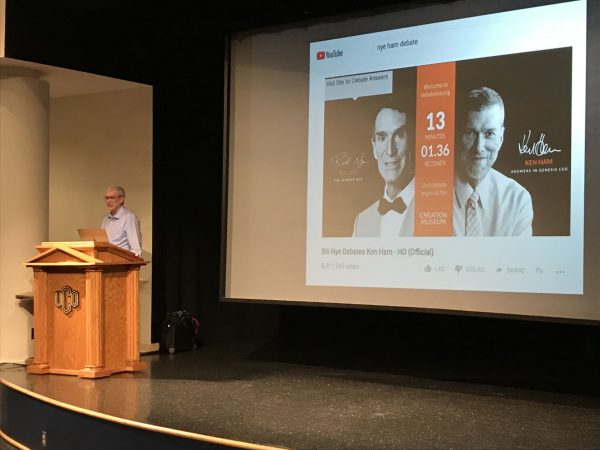 Ken Ham speaks at the University of Central Oklahoma in Edmond, Okla.

Ham: Nowhere in the Bible does it connect salvation to the age of the Earth. Right? If you confess with your mouth the Lord Jesus and believe in your heart that God has raised him from the dead, then you will be saved. Romans 10:9. In other words, salvation is conditioned on faith in Christ. Faith alone. Grace alone. Christ alone. 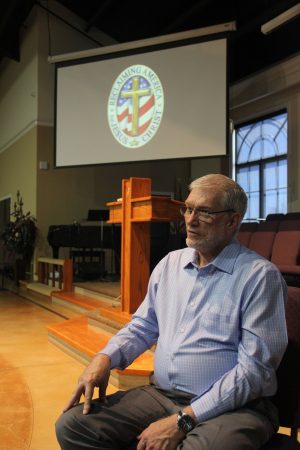 Ken Ham makes a point during an interview with The Christian Chronicle.

And then if people say to me, “So, it doesn’t matter?” I would say, “Yes, it does matter.” And the reason I say “Yes, it does matter” is because, ultimately, it’s an authority issue. In other words, where you get the millions of years from, you don’t get that in Scripture. …

From a biblical perspective, at the end of creation, after God created the six days of creation, after he made Adam and Eve, he said everything he made was very good. Everything. So, if we had taken the millions of years and put them in the Bible before man, then you’ve done two things.

One, you’ve actually added into Scripture, and you are unlocking a door where you can start outside of Scripture and force things into Scripture, which means you can reinterpret the way you want. And that’s an authority issue.

And two, it means you’ve put death and disease before sin. And then to say God calls diseases very good. Romans 8 makes it very clear that we live in a broken world. The death and disease we see in the world today are a consequence of sin.

So, my challenge to the Christians who believe in millions of years is not to challenge their Christian faith, it’s to challenge them: How do you then explain to somebody who asks, “How can you believe in a loving God with all the death and suffering in the world?” because you’re saying, “This is what God used to create.”

He said, “All of this is very good.” Aren’t you attacking the character of God? And really, without the shedding of blood, there’s no remission of sins. If there was the shedding of blood millions of years before sin, doesn’t that really undermine an understanding of the Gospel? So, that would be my challenge to them.

And the reason I see it as important is because, if you teach generations to come, you don’t have to take God’s word as written, you can take other ideas as written and add it into God’s word. Then you can do the same thing with marriage. Take other ideas and reinterpret marriage. And then, ultimately, you can say, “How do we know we can trust any of God’s word?” So, I think that’s why we see that as an issue.

Our zookeepers provide the animals with a wide variety of produce treats. Archie here loves corn on the cob! 🌽 pic.twitter.com/LuOw40hNlm

Ham: Well, I think it’s because within the church, if we’re really honest, the majority of our Christian college professors, Bible college professors, seminary professors … the majority of them have adopted millions of years, and to one degree or another, have adopted evolutionary ideas, whether it be biology or astronomy, anthropology and so on. And they’ve adopted those ideas and added them into Scripture, which I see as compromising the word of God.

And it’s interesting. I just think there’s so much peer pressure today that if you were to take the view that we take, that God created in six literal days, the universe is only thousands of years old, death came after sin, there was a global flood, and that’s where most geofossils came from, you’ll be accused of being anti-academic, anti-intellectual, anti-scientific.

And you know what? We don’t want that. You’re not going to be published in the mainline journals. And so, there’s a large segment, within the church, that will not stand where we stand, and some of them get very emotional about us taking the stand that we do. But to me, it’s important to take a stand on the authority of the word of God, and to do my best to never be — not to say we’re going to be perfect — but to the best of our abilities, we need to try not to let outside ideas control how we interpret Scripture.

Q: People still talk about that debate you had with “Science Guy” Bill Nye in 2014. Who won that debate?

Ham: I never looked on it as somebody was going to win a debate. I think debates are such, sometimes it depends on who’s got the better argument, not who’s all about the truth. So, it’s interesting. There are a lot of atheists that said Bill Nye won the debate, and there are a lot of other people who said Ken Ham won the debate.

I also looked on it as an opportunity. I want those who are watching, and it’s been estimated that, I would say conservatively, since that debate, live at the time and then afterward on YouTube and other places, and through DVD sales, we estimate conservatively that about 20 million people have seen that debate. So, when I realized how big that was going to be, my response was I just want the average person out there to understand what we’re saying, to understand the arguments and to challenge them considering the truth of God’s word.

Because ultimately, it’s not an interesting intellectual argument. Ultimately, we’re all about the souls of people. So, that’s why I took it very seriously and to make sure people saw I stood for the word of God and presented the Gospel. Then that’s with them before the Lord.

Q: I know the Ark Encounter cost over $100 million, and some fellow Christians say, “Couldn’t he have done something better with that amount of money?” How do you respond to those critics?

Ham: When critics say those sort of things about the money that was spent on the Ark Encounter, I would immediately respond by saying, “You know, that shows discrimination and prejudice right off the bat then, because what about all the other projects in the world?” I mean, take the presidential library for President Obama. They spent $175 million on roadwork alone. They say the library itself will cost over $1 billion. Tell me, are they saying the same thing about that? …

What about a church that spends $100 million on a new auditorium? And there are many churches that have done that. Are they saying the same thing about that? So, it comes down to prejudice against who we are, discrimination on our ministry. Because of who we are and the message we have. It’s got nothing to do with the poor. They’re not concerned about the poor.

Don't miss seeing this Tyrannosaur when you visit. pic.twitter.com/924XqV36SW

Q: A minister friend wanted to ask this: How would life be different if Noah had swatted those two mosquitoes?

Ham: You know, you have to read the Bible, and there’s actually a word in Hebrew called nephesh, and that when you look at the animals that went on board the ark, when God sent the living creatures on board the ark, it was the nephesh creatures. I suspect that insects are not nephesh. That’s not to say that any mosquitoes weren’t on the ark, some might have come along on the animals and so on.

And a lot of insects could have survived anyways in different forms like larvae and log-mat forms, which is probably how most of the insects survived, and they can easily survive in places like that. But it was two of every kind, seven pairs of some, of the land-dwelling, air-breathing, nephesh animals that went on the ark.

Q: Finally, why do you consider Genesis so important?

Students at the University of Central Oklahoma got a lesson in free speech as the public university re-invited creationist Ken Ham for a controversial speech. https://t.co/YnG5MmnmE5

Why do we all wear clothes? I’ve noticed we’re all wearing clothes. The animals don’t wear clothes. God gave us clothes because of sin. The first time the Gospel is preached is Genesis 3:15, and then again in Genesis 3:21. The first blood sacrifices are coming for their sins. Genesis is the foundation for the whole rest of the Bible. So, if Christians don’t believe in a literal Genesis, they have no foundation for their doctrine.

Dialogue: A conversation with John Clayton

A FORMER ATHEIST, Clayton travels the country, telling people how…

Apologetics Press, the Montgomery, Ala.-based church organization that has waged…