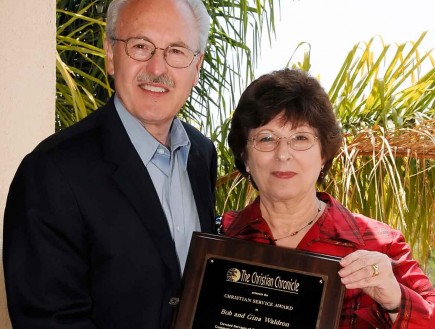 Joy McMillon
MALIBU, Calif. — Bob and Gina Waldron from Hurst, Texas, were awarded the Christian Service Award by The Christian Chronicle during the recent Pepperdine Lectureship.
Citing their 45 years of leadership in missions and ministry, Editor Lynn McMillon presented the award at a Chronicle luncheon.
Bob Waldron serves as executive director of Missions Resource Network, a Fort Worth-based ministry founded in 1998.
Missions Resource Network screens missionaries, provides training to churches interested in church planting and helps missionaries who are experiencing difficult transitions.
While still an undergraduate at Pepperdine, Waldron’s interest inmissions led him to become the minister for a Japanese-Americancongregation in Los Angeles.
Following graduation in 1963, he and hiswife served the church in Juneau, Alaska.
Waldron earned amaster’s degree in missions at Abilene Christian University, Abilene,Texas, and the family moved to Guatemala in 1972 as missionaries, wherethey served for six years.
After their return to the United States, Waldron taught missions for 13 years at Bear Valley School of Biblical Studies in Denver and Abilene Christian University.
In an effort to plant churches in the state and federal capitals of South America, he served as co-director of the Continent of Great Cities Ministry for 10 years.
In 1998 he earned a doctorate in missions from Trinity Evangelical Divinity School near Chicago, with an emphasis on urban church planting.
The couple has three children and eight grandchildren.