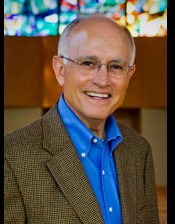 Lynn McMillon
On any given Sunday, Jerry Rushford is standing behind a different pulpit. Or maybe he’s planning the next Pepperdine Bible Lectures. Or maybe he’s writing a new book on church history or conducting research on hymns.
His zeal, energy and personal warmth to spread unity within the church are boundless. He loves to bring Christian people together to study, fellowship and worship. And, yes, to better understand each other.
For the past 30 years, Rushford has planned the Pepperdine Bible Lectures held in Malibu, Calif., each May. This year is his last year to act as director. But he has been more than a planner. He is a bridge-builder and a facilitator.
Rushford always has included a wide range of presenters and topics in the lectures. His goal has been to bring Christians together from all over the country and globe and to promote a positive spirit of unity for the kingdom.
These lectures create a four-day haven for unity for 5,000 people from more than 45 states and 35 countries. More than that, the lectures bring together the diverse elements within the church and help us appreciate one another.
Ted Parks, a correspondent for The Christian Chronicle and former professor at Pepperdine, said, “Jerry’s work has combined the best qualities of our tradition — the use of our minds to grasp God’s will and the tight-knit fellowship that gives us community wherever we go.”
This year’s Bible Lectures feature 288 classes and 400 presenters. Eighty-four couples also are on the agenda. The 69th annual lectures also feature 13 a cappella singing groups.
Rushford takes seriously the biblical teaching to honor one another. Each year he recognizes and honors at least a dozen people from many walks of life for their outstanding Christian service.
Rushford began his relationship with Pepperdine in 1978 when he became pulpit minister for the University Church of Christ in Malibu and a professor in the religion division.
In his early years of ministry, the majority of his energy was focused on West Coast churches. More recently, Rushford has fanned his influence nationwide.
From November to May, Rushford traverses the country Sunday after Sunday, preaching, plugging the Pepperdine Bible Lectures and promoting connection among diverse segments of the brotherhood. One Sunday he is in Pennsylvania, the next in Indianapolis, and the following in Vancouver, Wash., or Phoenix.
He tirelessly spreads the Word, and he absorbs the local church history from each city to use as material for one of his books.
On his journeys across the nation, he helps geographically and theologically diverse church leaders stay connected. Rushford’s passion has brought Christians together to reflect on their faith and worship, especially concerning fellowship among the diverse elements of the church.
Scott Laird, a minister in Great Falls, Mont., observed, “Jerry Rushford has the unique ability to make the lives of those who have walked by faith in the not-so- distant past come to life. … I am thankful for his love of the brotherhood and the actions he has consistently taken to pursue unity.”
Rushford reaches Christians all across the country, but he always finds a way to return to the beaches of Malibu. Pepperdine students and faculty hold a special place in his heart.
He currently serves as a professor of religion, director of church relations and director of the Churches of Christ Heritage Center at Pepperdine.
Next school year, Rushford and wife, Lori, will serve as house parents for Pepperdine’s study abroad program in London, where he will continue research on hymns, for which he is also well known.
Rushford can tell you the origins of and little-known facts about many hymns we sing today without batting an eye. He strives to have rich and inspiring worship sessions with vibrant music all within the a cappella practice of Churches of Christ, and these are experienced each evening at the Bible Lectures.
Upon his return to the States, Jerry will devote his time back at Pepperdine to the development of the Jerry Rushford Center, recently announced by President Andrew Benton. For more information, see www.pepperdine.edu/biblelectures/welcome/rushford-center.htm.
The Center will include the Churches of Christ Heritage Center begun by Rushford in 2009 as a further result of his many travels and collection of local church history.
He loves people and their stories, and he loves to share them with others.
“Jerry is a remarkable force for good among Churches of Christ,” Benton said.
LYNN McMILLON is editor, president and CEO of The Christian Chronicle.