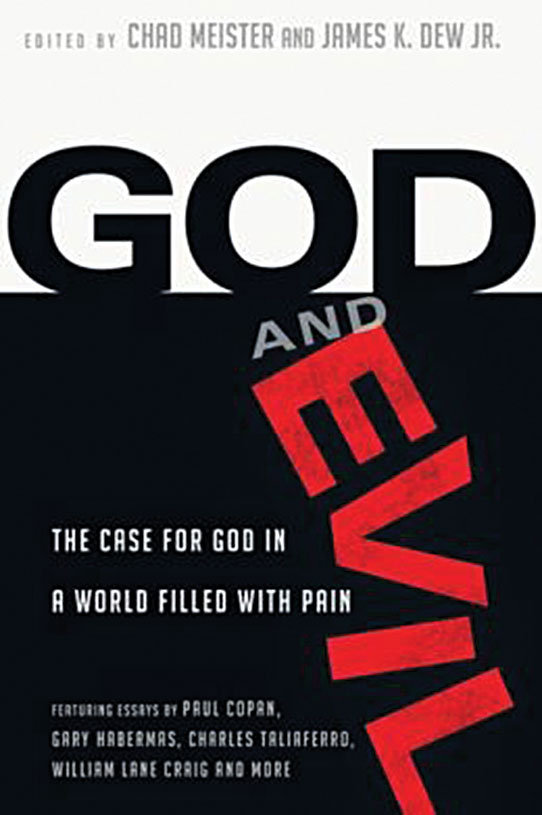 BILL BAGENTS
Chad Meister and James K. Dew Jr., eds. God and Evil: The Case for God in a World Filled with Pain

. Downers Grove, Ill.: InterVarsity Press, 2013. 360 pages, $20. (4 out of 5 stars)
The need to reconcile the goodness of God with a sin-damaged world is as old as Adam, Noah and Job.
For many Christians, the problem of suffering is difficult to understand or explain.

A new compilation, God and Evil: The Case for God in a World Filled with Pain

is fiercely uneven, but for this topic, that’s a high compliment. Each of the more than 20 authors is allowed freedom of expression without the homogenization that would lead to a neat and simple presentation. More than once, adjacent chapters offer competing or contradictory views, requiring study and meditation from readers so they can decide for themselves.

The book begins by discussing challenges that evil poses to faith in the God of the Bible — namely, that an increasing number of philosophers argue that the prevalence and depth of evil provide strong evidence that it is improbable that an all-powerful and loving God exists.
As the introductory section continues, one of the book’s editors, James Dew, explores “The Logical Problem of Evil” in a rich and challenging way.
The brief history of Scottish philosopher David Hume’s contribution to the logical problem of evil is particularly helpful. Hume’s judgment “that evil cannot be reconciled with the notions of divine power and goodness” continues to hold notable sway in Western culture.
Another challenging philosophical question for Christian apologists is the concept of gratuitous evil — evil that could be prevented without sacrificing some greater good or allowing some greater evil.
The chapter on this topic shows that “God and Evil” is not a lightweight book. It discusses natural evil (floods, earthquakes, disease), moral evil (including human limitations in defining it) and the role of evil (suffering) in building faith and character.
Part Two of “God and Evil” begins with “Natural Evil: A ‘Free Process’ Defense.” This chapter leaves the reader wanting more understanding of chaos systems, free process and how God can or does act through each.
The author cogently asks, “What if God merely created the potential for natural evil, not its actuality?” The reader is invited to explore how sound answers to such a question will affect one’s understanding of God and evil.
Opening Part Three are consecutive chapters in which Paul Copan, author of “Contending with Christianity’s Critics: Answering New Atheists and Other Objectors,” explores biblical passages that seem to indicate that God is the source of evil and the connection between evil and original sin. He lands solidly on the side of human responsibility due to free choice, adding that humans “are not intrinsically, essentially, or fundamentally evil.”
Other notable ideas in Part Three are why God seems elusive in our times of greatest need, types of prayers and other spiritual tactics available to believers in times of trouble, the reminder that God is big enough to hear both our anger and our disappointment and the idea that all religions, not just Christianity, grapple with this difficult issue.
Part Four, “Issues in Dialogue,” begins by inquiring, “What is the ultimate fate of those outside Christianity, particularly those who have never heard the Gospel?”
The chapter explores two potential answers to the fate of those who have never heard. One asks whether the concepts of grace and hell can be reconciled through inclusivism — “roughly the view that God’s gracious work of salvation can reach people even if they have not explicitly heard the Gospel.” The second asks if it is biblically accurate to assert “that damnation is only reserved for those who decisively reject his overtures of salvation and stubbornly cling to their evil.” The reader is challenged to decide.
This final section also includes two chapters exploring the intersection of creation, evolution and evil. William Dembski, author of “The End of Christianity: Finding a Good God in an Evil World,” concludes that evolution, “with or without God, does nothing to mitigate the problem of evil.”
The next chapter asserts the opposite: “The theory of biological evolution mitigates objections to religious belief based on the problem of evil, and the conclusions of cosmology make theism a more natural foundation for a worldview than atheism.” From the same data, philosophers draw opposite conclusions.
Such is the nature of “God and Evil” — no easy answers, no dodging of issues and much food for thought. This book is written more for the head than for the heart, but it powerfully engages both.
BILL BAGENTS is vice president for academic affairs at Heritage Christian University in Florence, Ala.