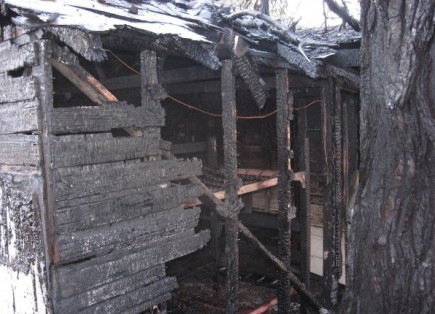 Joy McMillon
The fast-moving wildfire that burned down two cabins at Nebraska Youth Camp on March 23 is over, but officials say it could have been much worse.
“It’s a blessing from God that we only lost what we did,” said Jake Munsell, interim caretaker of the 60-acre camp, located southeast of Kearney, Neb., and bordering the Platt River.
Munsell fought the fire with buckets of water for nearly two hours before the Kearney fire department arrived.
Stretching 2 miles long and a half-a-mile wide, the blaze required 240 firefighters and volunteers and took seven hours to contain, according to the Kearney Hub.
In addition to the loss of the Arapaho and Bob-o-link camper cabins, two of the other cabins will need repair, said Lane Hinton, a member of the camp’s board of directors.
“The acreage has completely burned, and our hiking trails are gone,” said Hinton, a member of the Southwest church in Omaha.
He said camp officials are eager to enlist volunteers to help rebuild the cabins before the first camp sessions begin June 15. Nearly 600 youth from Nebraska and surrounding states participate in the summer camping sessions.
“NYC is what keeps the Nebraska youth so tight and well-connected with each other,” Hinton said. “The camp is at the core of what the church means to the youth here.”
Hinton said camp officials were in the midst of a fund-raising campaign for the construction of a dining hall before the fire wiped out two cabins.
Contributions to help rebuild the camp can be sent to: Nebraska Youth Camp, 65 Sweetwater Ave., Kearney, NE 68847.