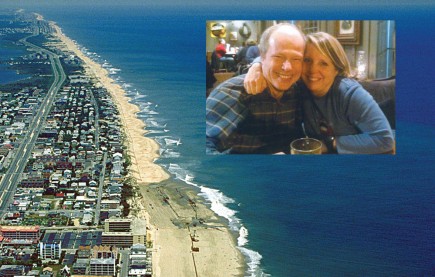 ‘God is already using him’

Michael L. Ray
JUST MONTHS AFTER a devastating injury, a minister’s family finds blessings in his time of suffering.

BALTIMORE — Nobody realized Cliff Holladay was in trouble. But when the ocean waves pulled back, the minister was lying unconscious at the edge of the water.
Bystanders and medical personnel rushed into action to save his life. His wife and son looked on, not yet knowing that he was paralyzed.
Clear blue skies and warm water welcomed Holladay and his family to the beach in Ocean City, Md. The minister for the Westside Church of Christ in Windsor Mill, just outside Baltimore, was enjoying a short vacation with his wife, Becky, and 11-year-old son, Caleb.
“Caleb and Cliff were both riding the waves in” on boogie boards, Becky Holladay said. She watched them closely, aware of the danger posed by riptides along the Atlantic coast.
“I saw Cliff come in on one wave, and he got up and was smiling,” she said. “He went back out and caught the next wave.” It was just after 4 p.m.
No one saw what happened next, but doctors at Baltimore’s R. Adams Cowley Shock Trauma Center believe that the minister’s head went into the sand in shallow water as the wave pushed his body, cracking his second vertebrae and severing his spinal cord.
“He was being very safe about what he was doing,” said Alan Deckard, an elder at the Westside church. But, in a split second, Cliff Holladay’s life changed.
Earlier that summer, the minister had preached through Ecclesiastes. In one of the final sermons he preached before the accident, he said, “Don’t take life for granted,” Deckard recalled.
“Solomon tells us to enjoy the time that God has given us but also recognize that within that joy there is also darkness. There is suffering,” the minister said.
At the beach, a group of vacationers pulled Cliff Holladay out of the water and started CPR. The ambulance crew transferred him to a helicopter that flew him to the trauma center.
By the time Becky Holladay had driven the three hours to the Baltimore hospital, word of the accident had spread throughout the 100-member congregation. Two elders and other church members were at the hospital before she arrived.
Cliff Holladay’s injury left him unable to move his arms or legs. He couldn’t breathe without assistance — first from a ventilator and later from a device that stimulates his diaphragm.
Other church members and area ministers have preached for the congregation in the months since the accident. In a way, the misfortune has helped the church accomplish one of Cliff Holladay’s longtime goals.
“Cliff was always interested in unity and trying to help us find ways to work together,” said elder Morris Wilson. The minister had helped organize meetings and discussions aimed at building unity and fellowship among area churches.
In the U.S., spinal cord injuries happen once every 82 minutes, according to the National Spinal Cord Injury Statistical Center. About 16 percent of those injuries result in quadriplegia. Medical expenses average over $1 million the first year.
Cliff Holladay’s medical expenses likely will be more than $2.5 million over the course of his life. While the family has health and disability insurance, they anticipate significant expenses that their insurance won’t cover, including having to remodel their home to accommodate a wheelchair.
The Westside church has responded “with overwhelming love,” Becky said. The church has paid the minister’s salary but will have to stop when it hires a new minister. The church had a special contribution to help the Holladays, as have other area congregations.
The Westside church started a fund to assist the Holladays, but “they need more than just money,” said elder John Hunt. He suggested notes or words of encouragement from others who were in similar circumstances would be appreciated.
Months after the accident, Cliff Holladay was moved to a rehabilitation facility, but recently he had to be returned to the intensive care unit.
Despite the setback, his wife said the minister “is truly putting things in God’s hands.”
Before the accident, he was a physically fit and active 61-year-old. He hiked, hunted and loved playing with his son.
“He can’t do those things anymore,” Becky Holladay said. “The things he can do are all going to be from his head. He can still preach with technology. He can use a voice-activated computer. He can look up Scripture with his software.”
But that’s all in the future.
“We’ll have to figure out how to get that done,” his wife said. “Cliff’s biggest thing right now is he wants to
preach again.”
The family is leaning on God, Becky Holladay said, and they see evidence that those around them — neighbors and family — also are learning to trust God.
“I’ve told Cliff this, and he just smiles. It makes him really happy,” she said. “So God is already using him.”
Andre White, a church member who has preached in Cliff Holladay’s absence, said he’s confident that God has a plan.
“I know he is passionate about his ministry,” White said of the minister. “I know this isn’t going to keep him down.”
For more information on the Cliff Holladay Fund, contact the Westside Church of Christ, 7009 Johnny Cake Road, Windsor Mill, MD 21244.