A researcher reflects on data that show declining numbers of students from Churches of Christ in higher education institutions associated with the fellowship.
Trace Hebert

Churches of Christ enjoyed a mutually beneficial relationship with colleges and universities associated with the fellowship during the 20th century. A substantial number of alumni planted and worked with congregations all over the country and throughout the world.

Conversely, these institutions enjoyed a relationship with Churches of Christ. Church leaders, members and alumni encouraged young people to go to a college or university associated with Churches of Christ (especially if it were their alma mater). This influence was a powerful force in the lives of many young people who made their college choices based upon such recommendations.

But the story has changed since the turn of the 21st century. Significantly declining numbers of students from Churches of Christ attend and graduate from these institutions. That suggests that the mutually beneficial relationship has substantively diminished from what it once was.

For the past eight years I have conducted research on the topic of enrollment trends in Church of Christ-associated colleges and universities, as well as trends among the fellowship’s congregations and the U.S. population. I report annually on this topic to the presidents of these institutions. 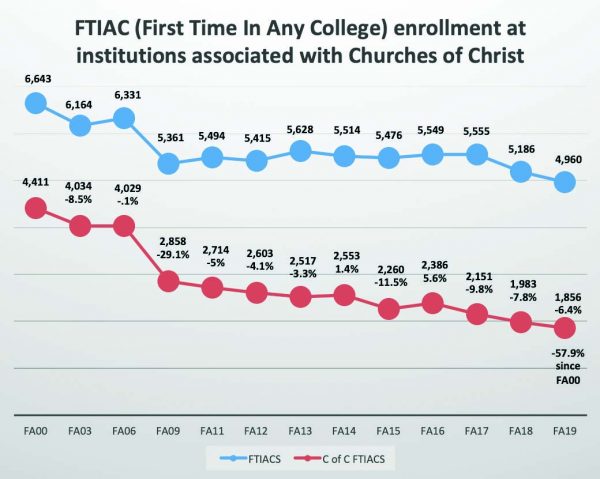 This chart shows the decline in fall enrollment figures for new students at colleges and universities associated with Churches of Christ from 2000 to 2019.

During this period, most of the associated institutions have been able to maintain their overall enrollments. However, all of them have declined in the actual number of enrollees from Churches of Christ, with most experiencing double-digit percentage declines.

Conversely, as is true with membership in churches of any kind in the U.S. during the past 20 years, Churches of Christ have experienced declines in both congregational and population numbers. The number of congregations has fallen by 1,103, or 8.5 percent, during the 19-year interval. During the same time period the number of adherents in Churches of Christ (baptized believers plus their families) has declined by 215,946, or 13.12 percent. 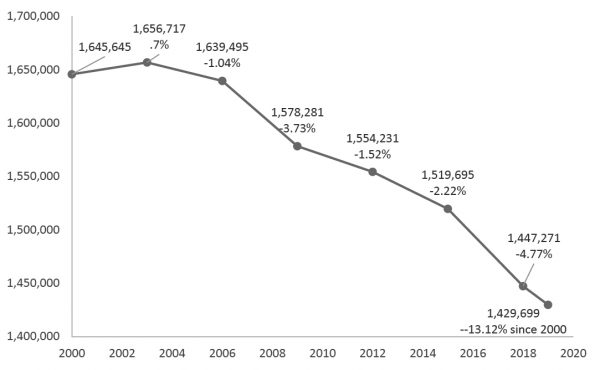 The data reveal a story of substantial disruption of the cycle of mutual benefit between Churches of Christ and the associated institutions, and this arguably creates sustainability challenges for both. This is especially true given the significant environmental challenges they each face.

Although Christ pleads with us to be unified in his name and Spirit, he has never promised to maintain our organizations for us, and we need to dismiss any notion that our Christian faith is tied to their continued existence.

A challenge facing the church, according to national research, is that membership in a church of any kind has declined significantly — from 70 percent of U.S. citizens in 1998 to only 50 percent in 2018.

A key factor of the decline is the increase in the population who claim no religious affiliation, also known as “nones.” This demographic has more than doubled, from 8 percent in 1998 to 19 percent in 2018.

Age appears to be a major factor when it comes to affiliation with religion. Older generations are much more likely than younger generations to be members of churches. However, substantial declines are occurring across all age groups.

Colleges and universities associated with Churches of Christ are facing a very different higher education environment from what they did when they were first established — more than a century ago, in some cases. The expectations of consumers of higher education have changed dramatically. 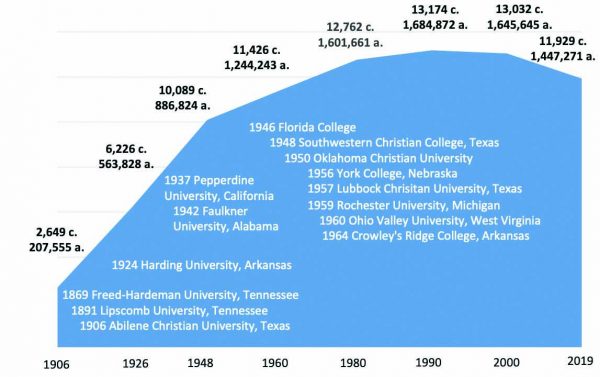 To meet those changing expectations, educational leaders and their institutions must adapt, which is difficult for institutions that have inherited a century-plus-old model of Christian higher education that has historically held itself as the standard to be adhered to and assessed by. This model is kept active by history, heritage and ideology as well as other powerful constituencies from both on and off campus, none of which accept change easily.

These dynamics leave me reflecting upon the future of both the church and the associated institutions — and what the next century holds for both.

I’m frequently left wondering whether it is possible for rediscovery and rebuilding of the mutual benefit between churches and universities. Subsequently, I’m concerned about how the mission to proclaim Christ to our communities has been weakened.

My experiences have shown me that God can use our congregations and institutions for his purposes for as long as they exist. However, the evidence is overwhelming that they are all temporary.

My experiences have shown me that God can use our congregations and institutions for his purposes for as long as they exist. However, the evidence is overwhelming that they are all temporary.

Although Christ pleads with us to be unified in his name and Spirit, he has never promised to maintain our organizations for us, and we need to dismiss any notion that our Christian faith is tied to their continued existence. The cause of Christ will continue on with or without us.

Having said that, I believe that God has called us to use our every resource to his glory, and history reveals how God can use the relationship between the church and associated institutions to serve his purposes with impressive outcomes.

TRACE HEBERT is director of the Doctor of Education program and associate dean of the College of Education at Lipscomb University in Nashville, Tenn. He has served at four colleges and universities associated with Churches of Christ and graduated from a fifth. He has been a member of Churches of Christ for more than 40 years in seven states. He is an elder of the Fourth Avenue Church of Christ in Franklin, Tenn.

SOURCES include news.gallup.com and the directory “Churches of Christ in the United States” by Carl Royster, published by 21st Century Christian.

A decade ago, a majority of freshmen at Rochester College… 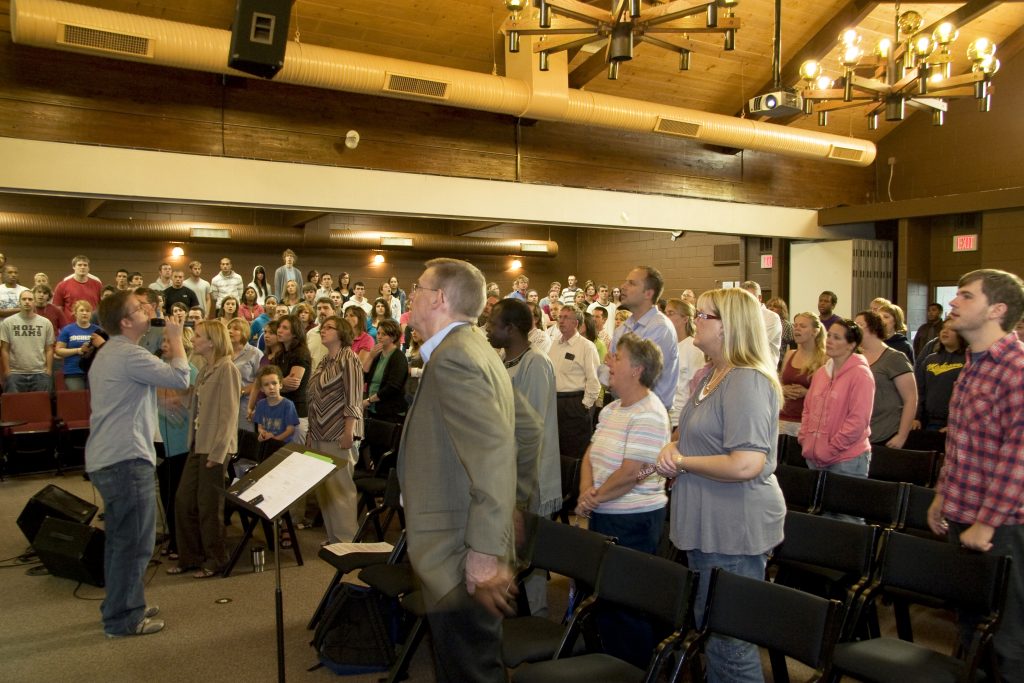 Students sing during a chapel assembly at Rochester College in…