Sharp decline seen in number of freshmen who identify with the numerically declining fellowship.

Since today’s college freshmen were infants, roughly 1,200 Churches of Christ in the United States have closed, and the number of men, women and children in the pews nationally has shrunk by 200,000.

In the same 18-year period, universities associated with the fellowship — from Abilene Christian University in Texas to York College in Nebraska — have seen a 51 percent decline in students who identify with Churches of Christ.

At the start of the 21st century, two out of every three freshmen at those dozen-plus universities — 66 percent of 6,643 total first-year students — cited their heritage in Churches of Christ.

Now, that figure stands at two out of every five freshmen — 39 percent of 5,603 total first-year students — revealed the annual survey conducted by Trace S. Hebert, a higher education researcher at Lipscomb University in Nashville, Tenn. 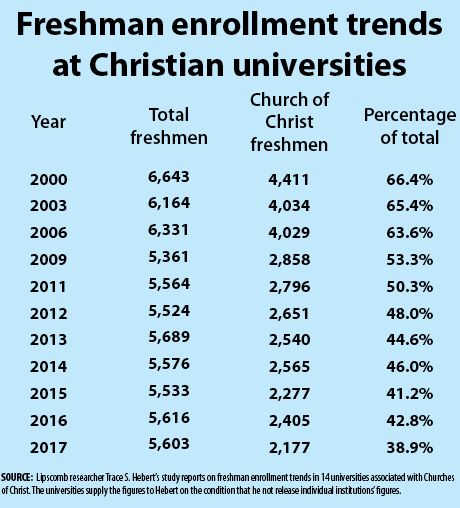 “The C-of-C enrollment data revealing declining numbers of C-of-C enrollees in affiliated institutions suggests that the era of brand loyalty has substantively diminished from what it once was,” added Hebert, associate dean of Lipscomb’s College of Education.

“Our fellowship’s declining numbers nationwide are having a negative impact on the number of college-bound freshmen available to attend our Christian colleges and universities from within our fellowship,” Hoppe said. “Another trend that we are seeing is a decline in parents’ commitment to send their college-age children to colleges and universities affiliated with the Churches of Christ.”

A smaller pool — and a wider net

The 2000 edition of “Churches of Christ in the United States,” a national directory produced by 21st Century Christian, counted 13,155 congregations and 1,645,645 adherents across the nation. 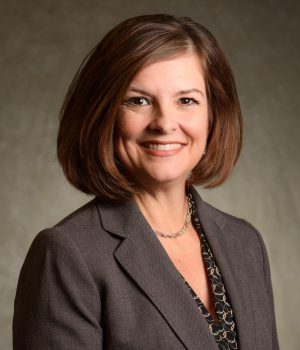 “While the overall membership of Churches of Christ is shrinking, the number of church members attending our Christian universities seems to be shrinking at a faster rate,” said Jana Rucker, vice president for communications and enrollment at Harding University in Searcy, Ark. “We see this as an opportunity to emphasize the benefits of a Christian university — not just Harding — to our churches.”

Risa Forrester, vice president for admissions and marketing at Oklahoma Christian University in Oklahoma City, expressed similar thoughts: “Most graduating high school seniors in our fellowship do not attend a Church of Christ-affiliated university despite clear, significant spiritual, educational, emotional, professional and relational benefits. Interestingly, families outside our fellowship see and value these benefits and want their students at Oklahoma Christian University.”

For many students and parents, the price tag of Christian higher education seems to be a major concern.

“More and more members of the Churches of Christ are (more) concerned with taking on student loan debt and the cost of college than in previous years,” said Paul J. Casebolt, director of admissions and retention services at Florida College in Temple Terrace, Fla. 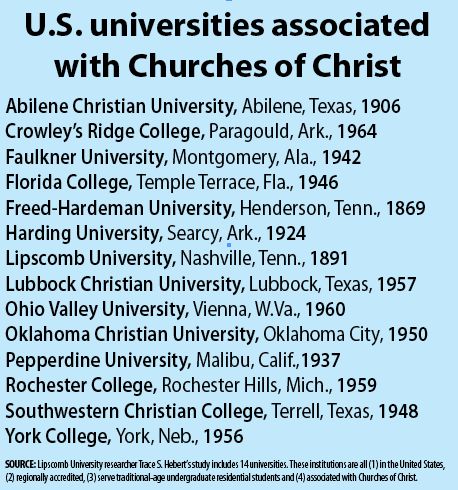 “Christian families tend to be — and for good reason — more fiscally conservative than the typical family,” Casebolt added. “Media coverage of the student loan crisis makes people see them as less of an investment in the student and more of an anchor hanging around their necks upon graduation.”

Those universities “are showing they can hold their own” by recruiting more students from outside Churches of Christ, Hebert told The Christian Chronicle. While combined freshman enrollment fell 16 percent since 2000, rising graduate enrollments have helped balance out overall numbers.

“I’m a bit of a history buff … and as I look back, I see the beneficial, symbiotic relationship between these institutions and the growth of the church in decades past.”

“The larger concern, as I stated in the report, is what happens to the church long-term when you don’t have the same number of students and alumni coming out of these universities, serving and planting churches and helping grow the population,” Hebert said. “I’m a bit of a history buff … and as I look back, I see the beneficial, symbiotic relationship between these institutions and the growth of the church in decades past.

“That’s no longer the case, or it’s greatly diminished, I should say, from what it once was,” he added. “It’s going to become even more diminished if these trends continue in the direction that they’re going. A kingdom-minded person about Churches of Christ should be very concerned about this.”

How to label a Christian

A complicating factor in assessing the data: the self-reported nature of students’ religious affiliations.

From Hebert’s report: “One of the challenges in tracking this data is that some students who attended the Churches of Christ prior to leaving home identify themselves as ‘Christian’ or ‘non-denominational’ or some other designation on their enrollment paperwork.

“This has always been a known variable,” he added, “and it is understood that at any given point during this longitudinal study the actual number may be somewhat different than what was reported by the institutions based on the best information they had at the time.” 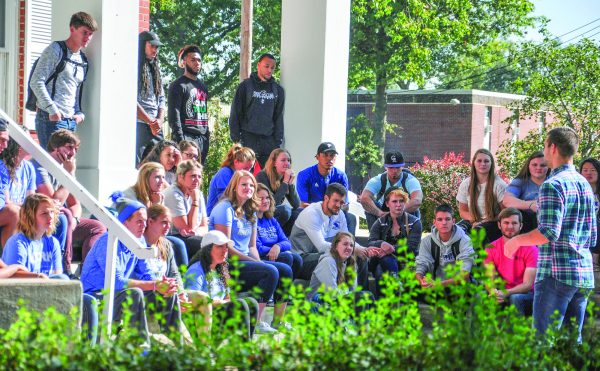 Jacob Wirka delivers a devotional thought on the York College campus in Nebraska.

Indeed, several university officials cited the labeling difficulty in their comments to the Chronicle.

“The biggest trend we are seeing across all religiously affiliated students is that they are much less likely to select a denominational affiliation,” said Kristin Paredes Collins, dean of enrollment management at Seaver College, the undergraduate school at Pepperdine University in Malibu, Calif. “Instead, students are more likely to select ‘Other Christian,’ which means the ‘Other Christian’ group on campus is on an upward trajectory. 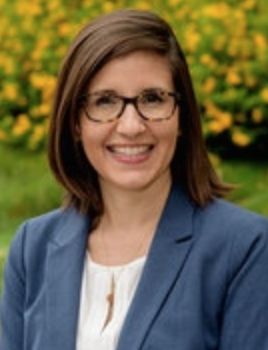 “Students are also noting that they attended a Church of Christ in the past or they have extended family who are currently attending — even though they might not be,” Collins added.

At Lubbock Christian University in Texas, freshmen who identify as members of Churches of Christ “represent by a wide margin the largest group of students who enroll,” said Warren McNeill, vice president for marketing and public relations.

“The second and third largest groups are those who identify as ‘Christian’ and ‘non-denominational,’” McNeill added.

“Rochester College continues to recruit students, both regionally and nationally, regardless of their specific church affiliation,” Hutson said. “We partner with local, regional and national church and parachurch organizations in our recruitment efforts.” 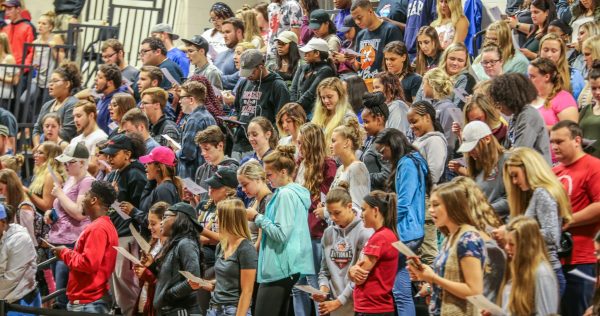 Students assemble at a convocation/chapel service at Rochester College in Rochester Hills, Mich.

The reason it matters

Christian university presidents supply the religious affiliation data to Hebert on the condition he can release aggregate figures but not individual institutions’ numbers.

The Chronicle asked the universities for their individual figures, but most declined to provide them.

• Freed-Hardeman University in Henderson, Tenn., which reported that 80 percent of its first-time freshman identify with Churches of Christ.

Related: Guest column: ‘This is not a “Church of Christ”-related challenge’

• And Ohio Valley University in Vienna, W.Va., which noted that its proportion of freshmen from Churches of Christ has dropped from 48 percent a decade ago to 27 percent this school year.

“The reason it matters to Freed-Hardeman to recruit students who are members of the Lord’s church is because we love the church and want to see these young people grow into strong, faithful Christian adults who love the Lord and his church,” Freed-Hardeman President David Shannon said. 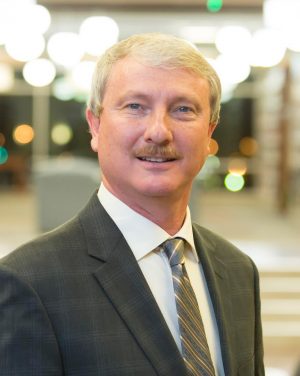 “Ironically, this is also the reason we love to see students come who are not members of Churches of Christ,” Shannon added. “It gives us opportunity to see hearts turn toward God. Just this past week, we witnessed one believer baptized into Christ on Thursday and another on Friday.”

Joy Jones, Ohio Valley University’s provost, wrote: “In reality, we understand that there are not sufficient numbers of C-of-C-affiliated students to populate the brotherhood schools. We are increasing our efforts and working to recruit ‘faith-based’ students that will be a good fit for a Christian university.”

Kevin Campbell, vice president for enrollment management and student engagement at Abilene Christian, said the Texas university remains committed to its Church of Christ heritage. Like many of its sister institutions, ACU requires its faculty and board members to maintain active membership in a Church of Christ congregation.

“We recruit every Church of Christ student in our region that we can find and we believe can be successful at our institution,” Campbell said. “At the same time, we have also expanded our recruitment with other conservative Christian students who desire a Christian education. Many of the students we pursue in addition to the Churches of Christ are members of non-denominational churches, community churches, Disciples of Christ, the Christian Church and Baptist churches.” 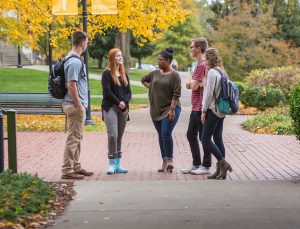 Matt Paden, chief of staff at Lipscomb University, said: “Our goal in recruiting new students is that Lipscomb be a place that is a ‘good fit’ for them spiritually, academically and socially. We are very bold about our focus on faith, our core Christian values and our heritage, and we believe Lipscomb University is a place where young people from Churches of Christ and other backgrounds can, and do, grow in their faith.”

Ervin D. Seamster Jr., president of Southwestern Christian College in Terrell, Texas, was unavailable for comment after a recent surgery.

Administrators at Faulkner University in Montgomery, Ala., did not respond to the Chronicle’s requests for comment. 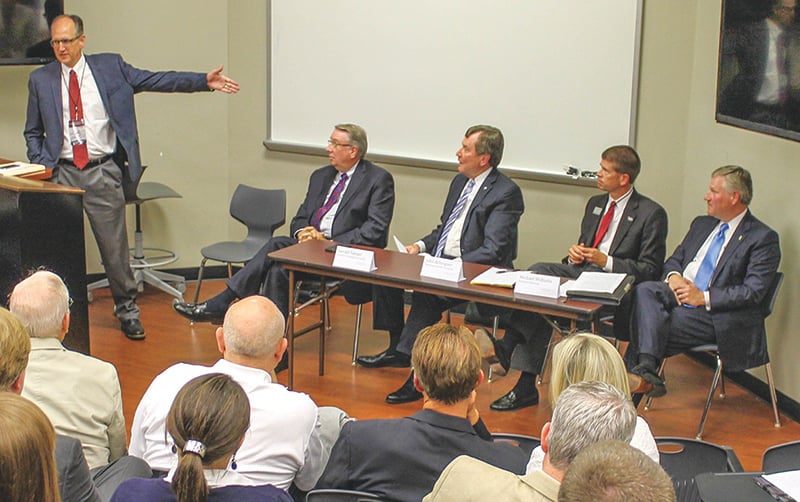 NASHVILLE, Tenn. — In a culture increasingly hostile to Christians,…