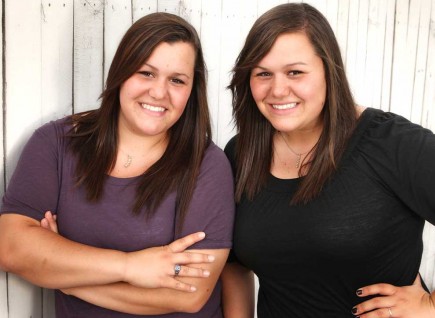 Dialogue: A conversation with Kristen and Katie Bay

Lynn McMillon
TWIN SISTERS, 17,  discuss faith, friends and challenges of ministering to teens.
Kristen Bay came into the world one minute after her sister, Katie, was born.
“And yes, she loves reminding me that she is older,” Kristen said of her twin, “but it is OK because I don’t mind being the baby of the family.”
The 17-year-olds graduate this month from Christian Home and Bible School in Mount Dora, Fla. Both were cheerleaders and athletes on the school’s track and field team. (Katie can throw a discus 100 feet, 2 inches.
Kristen’s personal best is 97 feet, 2 inches.) Both serve as representatives in student government. Kristen is senior class president and Katie is vice president.
This fall they move to Searcy, Ark., where they will study at Harding University. They’ll join their 21-year-old sister, Sarah, who graduates from Harding in December.
The twins are active in the youth ministry of the Orange Avenue Church of Christ in Eustis, Fla. Their father, Jeff Bay, serves as an elder. When asked if they have a favorite preacher, both named Joe Roberts, Orange Avenue’s senior minister. They also enjoy messages from Lonnie Johnson, the church’s youth minster, and Wiley Lowe, youth and family minister for the Holly Hills, Fla., Church of Christ, who speaks at events across Florida. Katie’s favorite hymn is “Lord, Reign in Me.” Kristen’s is “In Christ Alone.”
Sharing schools, activities and faith in addition to physical features can be a source of strength — and occasionally tension — for the twins. “It’s so easy for us to get on each other’s nerves,” Katie said. “It’s really hard when you are around someone 24-7.”
At the same time, having a twin sister is “sort of like having a built-in best friend,” Kristen said, “because she is always there for me if I need her.”
Katie agreed: “It’s really cool to have someone that knows you — probably better than you know yourself.”