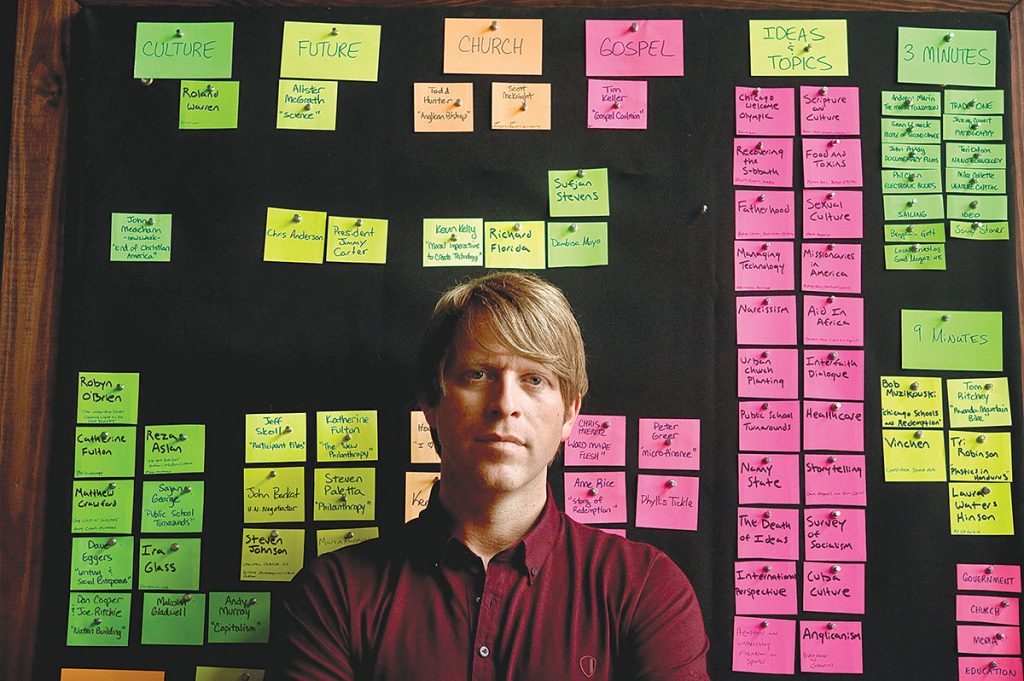 A Converstion with Gabe Lyons

Author, researcher and ministry founder discusses modern challenges for ministry training and evangelism among 'The Next Christians.'

Lynn McMillon
President Emeritus
‘Seven years ago, I was 27 years old and embarrassed to call myself Christian.”
Those are the opening words of Gabe Lyons’ 2010 bestseller “The Next Christians: The Good News About the End of Christian America.” Despite the downbeat intro — based on his friends’ and neighbors’ unfavorable view of Christians — Lyons says he’s optimistic that Christianity’s best days are ahead.
That may sound surprising, given the findings in his previous book, “unChristian: What a New Generation Really Thinks about Christianity … and Why It Matters,” cowritten with researcher David Kinnaman. The groundbreaking work, which surveyed ages 16 to 29, revealed that large numbers of young Americans see Christians as hypocritical, insensitive and judgmental.
“Restorers” are the best hope for changing those impressions, argues Lyons in “The Next Christians,” recently redubbed “Seven Ways you can Live the Gospel and Restore the World.”
Christians who engage culture — informed by truth yet seasoned with love — display an authenticity that the world desperately needs to see. Restorers are provoked, called, grounded, civil and countercultural, he writes. He’s gotten the attention of media outlets including CNN, Fox News, the New York Times and USA Today.


Now working with a church plant, Trinity Grace Church, Tribeca, in New York, Lyons is the founder of Q Ideas (www.qideas.org) — a learning community that urges Christians to advance the common good in society. He prays that his efforts will help equip innovators, entrepreneurs, entertainers, artists, scientists, educators, historians, environmentalists and everyday people to do extraordinary things for God.

Is it more difficult to follow Jesus today than in times past?
It has always been difficult to follow Jesus, no matter the times. For 2,000 years, followers of Jesus have walked through that tension.
I think it’s probably illuminated today a little more because for the last many years, Christians, especially in America, have had an easier go of practicing their faith and not being challenged as much and being respected culturally for the way that they lived.
It’s just in the last 30 years there is starting to be a backlash. For some Christians, it means it’s getting harder to follow Jesus because society is not as likely to respect the way that they’re trying to follow Jesus.


Does traditional evangelism still have a place in the Christian faith?
Proclamation of the Gospel will always be a part of our faith.
Talking to strangers about Jesus is especially effective with people who are down and out, who are looking, who recognize they have a need, who feel their own brokenness very deeply. When we have those conversations with a stranger, then there’s openness to something hopeful.
Most of what I’m describing is a Western world setting where people materialistically feel like they have everything they could want, who aren’t feeling a deep need and are going to rely on trusted friends and long-term relationships to point them to God.
It’s going to take a long-term commitment for us as Christians to engage people, even if we can’t see the fruit or results quickly.
What are some of the greatest challenges that church leaders need to address?
A major challenge is the disillusionment among the next generation that their faith doesn’t really relate to their world — that it’s just another belief system, one of 100 to choose from.
They fear that the Christian faith doesn’t say anything about their real, day-to-day life and what they’re here for on this earth, what their purpose is, about their vocations. So, a new generation’s left wondering whether their faith really matters to the whole of their life. And if it doesn’t matter, they’re not interested.
That is the crisis. They want faith to make sense for them and to understand it in their world of reality.
So the challenge is for ministers to be re-educated in an old way of talking about faith and to understand this greater story that makes faith cohesive and coherent. So it’s a faith that not only they can believe and live and relates to every part of their life, but also one they can easily share with other people. Because it’s really a good way both to live and understand what’s wrong with them as well — their sin, the bad choices they make and how they can find real hope.


What do you see as the primary reasons why the Christian faith is shifting from the United States to the Global South?
It’s the toughest environment for the Gospel to go forward, and we’re just getting confronted with it in America’s major cities, on our college campuses, probably more than we ever have.
We’re pioneering right now. How does the Gospel gain traction and go forward, and gain a hearing in that context, where people are fed up with Christians, don’t respect their faith, feel like they’ve already heard it all — it’s not the first time they’re hearing it?
To me, that’s the challenge. And maybe that’s what‘s happening in the Global South. There are people in a different frame of mind that are just coming to know Jesus, but as these cultures develop, one finds skepticism and cynicism towards faith.
Most of us have never had to confront that kind of faith development and we must be ready for it. 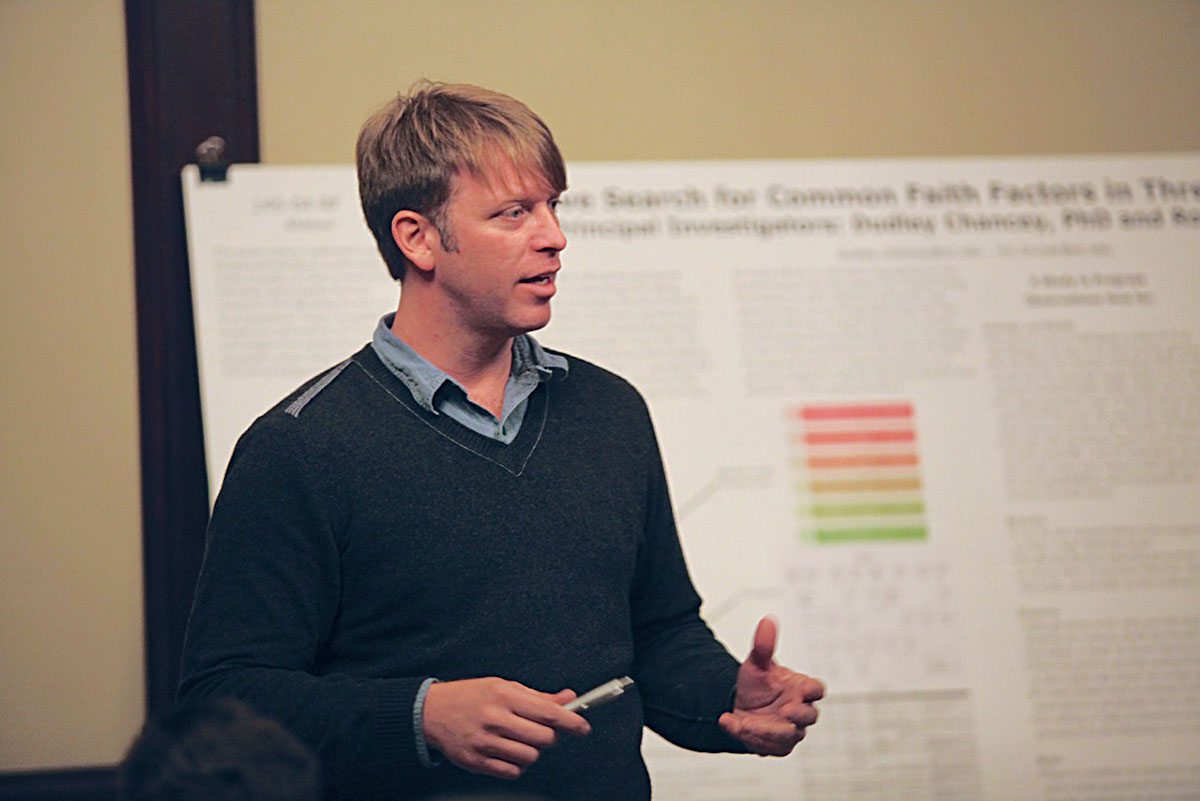 Gabe Lyons speaks with Christian students about the search for “faith factors.” (PHOTO BY JUDSON COPELAND)

How should we train those going into ministry so as to not perpetuate mistakes of the past?
To me, that’s the big question schools right now are wrestling through. Fewer and fewer people are deciding to go into a full-time program to just get their degree. What they’re having to do is retrofit the seminary to realize people’s need for on-the-job training.
So there’s a real opportunity in the institutional space to actually attract more students to look at online learning scenarios or smaller, one-week modules of classes for those who are already actively engaged in their vocation. They have no desire to leave that vocation, but yet they can come in and actually get some anchoring in why that vocation’s good for the world, why God might have wanted us to have good economies and create businesses, and why creating great art brings glory to God and how the church has thought about that for hundreds of years.
That would be so grounding, so valuable to so many Christians who don’t have that — and they feel like second-class Christians.


What is the current view of evangelism and church planting?
In New York, we recently hosted 20 different people in the fashion world in our apartment who are believers and who work in fashion. Our minister was there, and I was there, hosting this conversation, to talk about fashion, to talk about how could we think about fashion — is there going to be fashion in the Kingdom?
Sometimes ministers make the mistake of thinking they’re the expert. One needs humility to come into that place and say, “Let me just talk to you — just about the story God is telling. You guys are the experts at what you do. Tell me about your world. Tell me about the struggles you deal with. I want to learn from you. Tell me about where you see God’s redemptive edge breaking into your profession, in your work culture, in the conversations people are having about fashion and every other work area.”
A minister thus becomes the person who can convene these conversations but realizes they can’t be the expert in that particular conversation.
Secondly, we usually affirm the person who is committed to full-time ministry and make a big deal about that, but the new teacher who is going into the new high school doesn’t get our affirmation in the same way. Why not? Why don’t we pull that new teacher up and pray a blessing over her/him as a church and say, they’re going into this school, or into this neighborhood, and they’re serving students and parents and we need to bless that?