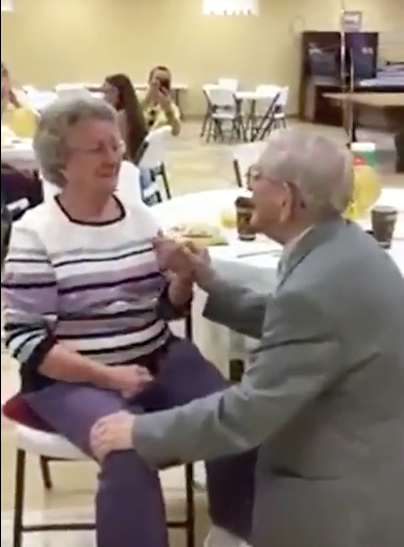 Harvey Wosika's granddaughter captures the sweet moments as the Oklahoma church member serenaded his wife, Mildred, during a celebration of their 50th wedding anniversary.

Chellie Ison
An Oklahoma couple, members of the Newkirk Church of Christ, have captured the hearts of many this week.

In a video posted to their granddaughter’s Facebook page Harvey Wosika, 91, sings “Let me call you sweetheart” to his bride, Mildred, 90.

The unexpected serenade happened at a party celebrating the couple’s 50th Anniversary, which was just days earlier on Aug. 5.

Their granddaughter shared the story and video with Tulsa television station KTUL.

In a phone interview with The Christian Chronicle, Harvey Wosika said he had been planning the surprise for a couple of weeks.

“I had the words written down in case I forgot them, but I did OK,” he said.

Mildred had no idea Harvey was planning something.

Mildred said Harvey has never been much of a singer. She’s only heard him sing in church and more recently he’s been hesitant to do that because of the “cracking” in his voice when he sings.

Both are a little shocked by the reaction they’re getting to the video.

“It was special,” Mildred said.

“The good Lord has been good to us,” Harvey said.

When asked what the secret has been to their 50 year marriage Harvey said, “Say ‘yes honey.'”

“No,” giggled Mildred. “It’s love, understanding. God has a lot to do with it.”

Harvey and Mildred have been members at the Newkirk Church of Christ since 1979. The couple has 11 children.