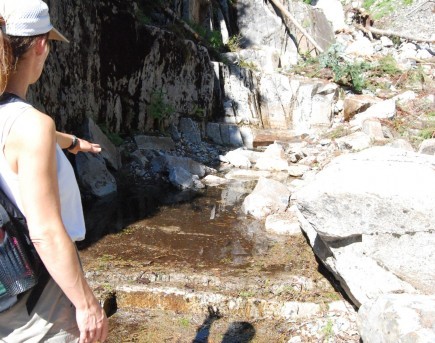 Joanna Fitzsimmons
SNOQUALMIE, Wash. — Trapped in air pockets beneath 5-foot thick ice, their backs broken, lying in a frigid glacier stream, the two boys clung to life. They were there for six hours.
Outside the walls of ice two hiking groups met each other. One was made up of the families of the two boys trapped under the fallen ice cave. The other was a Church of Christ youth group praying with them.
On Aug. 21, Alex Corbett, 17, and Allesandro Gelmini, 14, were enjoying the last of the summer by hiking Denny Creek, near here. There they explored a popular ice cave formed naturally over Denny Creek. Shortly after, a Church of Christ youth group came up to see the ice cave.
“When we got there, two mothers frantically ran towards us, saying their boys were trapped under the ice,” said Marilyn Pyke, a chaperone guiding the youth group. One of the mothers was on a cell phone, dialing emergency responders.
It was supposed to be just a normal hike for some of the teens from the youth group of Lakeview Church of Christ in Tacoma, Wash. Their day changed when they saw the massive cave had collapsed and horrified families were now standing outside it. Although they believed the trapped teens had died, using rocks and sticks the teens and adults tried to chisel into the ice. They stopped when they realized how dangerous it was for them.
Instead of giving up, they did the only thing they knew to do: They prayed.
It took two hours for the rescue groups to arrive. Using chainsaws, they cut the ice up into chunks small enough for them to carry. To their surprise, the boys were alive and able to talk to them. After 5 hours they pulled Gelmini out. Shortly after, they got Corbett out. The teens were taken by helicopter to Harborview Hospital in Seattle.
After Corbett’s younger sister found out her brother was okay, she told reporters that, “I thanked God because they were praying a lot.”
The “they” were the teens in the Lakeview youth group: Michael Miller, Matthew Miller, Christopher Farnsworth, Andrew Farnsworth and Joni Baker. They were chaperoned by church members Marilyn Pyke and her son Christopher Pyke.
“[They] are both out of the hospital and are expected to fully recover,” said Marilyn Pyke, two weeks later.  “They shouldn’t have, by all reasoning, made it out alive. The families and all of us are convinced that it was a miracle they are still here.”