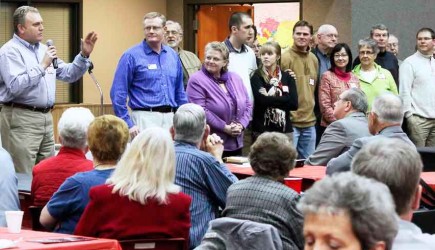 Staff reports
SEARCY, Ark. — Churches of Christ must make a renewed commitment to church planting in Eastern Europe and continue their pledge to strengthen indigenous church leaders.
Those were among the messages delivered at the annual Workshop Eastern Europe at the College Church of Christ. More than 170 people attended the event, formerly known as the Romania-Albania Workshop. Attendees represented Churches of Christ from 10 U.S. states.
Shawn Daggett, director of the Center for World Missions at Harding University in Searcy and organizer of the event, reminded participants in his keynote address about the dangers of paternalistic and short-sighted missions.
A common thread among the speakers was that the mission in Europe has not ended, participants said. Sending churches must continue to plan thoughtful, responsible, long-term strategies for church growth and evangelism in Eastern Europe.
Several missionaries and native workers in Europe participated, including Ellen Walker of Albania, Jeff Shepherd of Bulgaria, J.D. and Ashley Dargai and Gyula Sut of Hungary, Pete Hunt of England, Corey and Sarah Keen of the Czech Republic,  Kevin and Allison Morrill of Albania and Vladimir and Muza Vakhrushev of Russia.
Christo Arnaudov, a minister from Bulgaria, joined the conference via Skype.
“The speakers challenged and encouraged us,” Walker said, “but mostly it was so wonderful to be able to talk directly to people who have an interest in missions and ask them to lend their help to the Lord’s work in Albania.”
The Valley View Church of Christ in Jonesboro, Ark., will host the Workshop Eastern Europe in 2013.