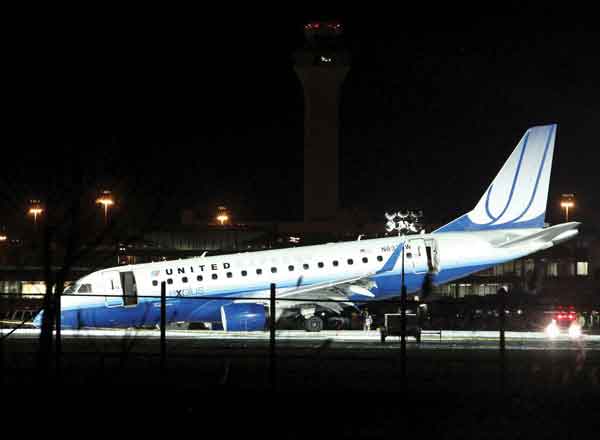 Members of the Twin City Church of Christ in the St. Louis suburb of Festus, Mo., are praising God for the quick thinking and cool composure of one of their own.
Pilot Michael Walden guided United Airlines’ Shuttle America flight 5124 from Atlanta to Newark, N.J., to a safe landing after the plane’s front landing gear failed to deploy, NBC News reports.
Walden and his family are active members of the Twin City church, minister Patrick Adam told The Christian Chronicle.
The minister described Walden as “an amazing Christian father and member of the Lord’s family.”
“Mike is an amazing person,” Adam said. “His desire, apart from flying, has always been to be sold out for Christ. And following this incident, God’s name has been invoked a number of times. God is amazing.”
NBC News reports:

The plane landed at about 6:40 p.m., and the nose gear collapsed upon landing.

The 69 passengers and four crew members exited on the emergency chutes and were transported to the terminal by bus, authorities said.

Passengers on arriving flights said they saw the plane grounded on the runway surrounded by foam.

“As we pulled in on the runway, on my left, I saw a plane with a bunch of police surrounding it,” said Eugene Nisenker. “Grounded, with the nose touching the floor.”

There were no injuries, Shuttle America said in a statement.

“Thank God there were no casualties,” said Mary Brown, another flight passenger who saw the plane. “There could have been, so I hope this was red flag for them to really check on everything.”

Read the full story.
Walden, 42, is a native of Washington, Ind. The Washington Times-Herald interviewed his mother, Kay Walden.

Kay Walden couldn’t be prouder of her son, who she believes is a hero — although she credits someone else, as well.
“Praise God he was with him,” she said.
Her husband, Bryan, talked to their son after the incident, but Kay was out of town when she heard about it.
“My heart just dropped,” she said. “He sent a text to his brother and included a picture. It didn’t look bad. The nose was down on the runway, and the tail end was kind of up in the air. It didn’t look like it did all that much damage to the plane.”