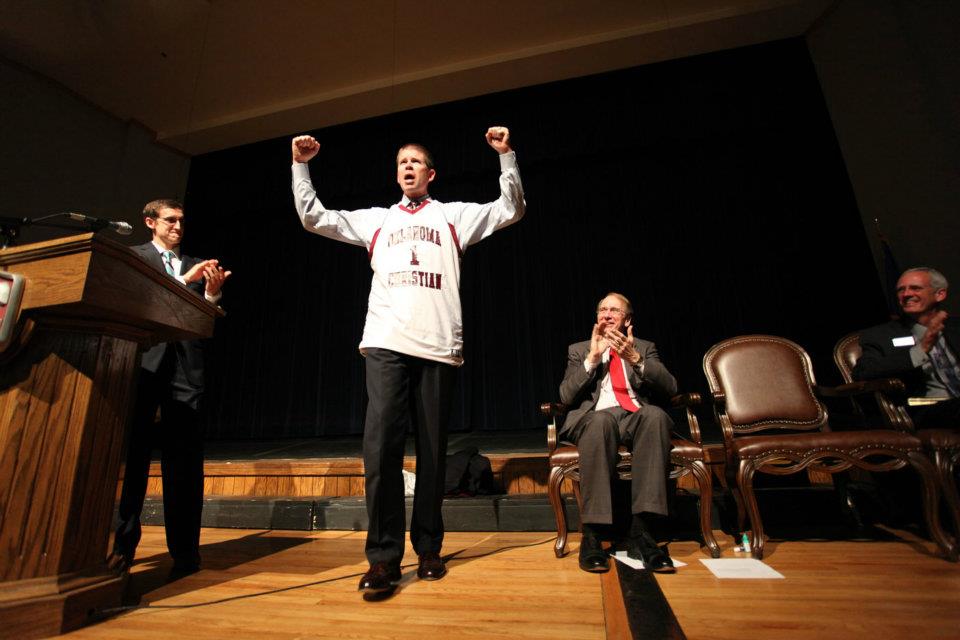 DeSteiguer said in a statement: “I am deeply honored and humbled by the board’s decision and confidence in me. OC is a one-of-a-kind university, and I appreciate our board, faculty, staff and alumni. During my nine years here, I have been inspired by the personal engagement our students receive to ensure they are intellectually and spiritually ready to succeed and serve when they graduate.”
DeSteiguer and Allison Garrett, Oklahoma Christian’s senior vice president for academic affairs, were named finalists for the top post late last year. Both were interviewed by the 33-person board this weekend. Milligan said the university was blessed to have “two well-qualified and talented finalists.”
DeSteiguer’s appointment marks the second time in two days that a university associated with Churches of Christ has named a new president. He will be the sixth president in Oklahoma Christian’s 62-year history.
L. Timothy Perrin, vice dean and professor of law at Pepperdine University School of Law in Malibu, Calif., was tabbed Friday to serve as president of Lubbock Christian University in Texas. Perrin will succeed Ken Jones, the Lubbock Christian president for 18 years before transitioning to the role of chancellor last year.
Meanwhile, Harding University in Searcy, Ark., has launched a website to accept applications and recommendations for its next president.
Harding President David Burks plans to retire at the end of the 2012-13 academic year after 26 years at the helm.
More on DeSteiguer, via Oklahoma Christian:

A native of Tahlequah, Okla., deSteiguer has spent almost two decades in higher education. He served at his alma mater, Northeastern State University in Tahlequah, as a senior development officer before arriving at Oklahoma Christian in 2002 as part of President O’Neal’s new administration.
During nine years as OC’s chief advancement officer, a record $110 million was given to the University, including the successful $60 million Higher Learning~Higher Calling campaign, that was completed ahead of schedule.
The campaign led to significant improvements for the campus, including the new Lawson Commons, featuring the Freede Centennial Tower and McGraw Pavilion, and the $7.5 million initiative to build the Noble Science Wing and upgrade the Mabee Laboratories at Vose Hall. The campaign also produced four new endowed chairs and more than 60 new or enhanced maintenance, operating and scholarship endowments.
Dr. deSteiguer is a member of several civic organizations, including the Edmond Chamber of Commerce’s executive committee, the Oklahoma Planned Giving Council, the Edmond Rotary Club and the Oklahoma Bar Association.
He received his undergraduate degree at Northeastern State, summa cum laude, in 1984. He was a Rotary International Scholarship recipient at the University of Kingston, Jamaica, and earned his juris doctorate from Pepperdine University, magna cum laude, in 1989.
He and his wife, Darla, also an attorney, have two teenage children, Joe and Abby. He is a frequent Bible class teacher and a deacon at Memorial Road Church of Christ.