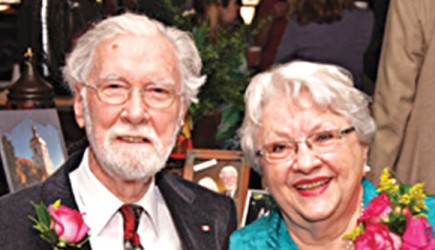 Erik Tryggestad
Joseph L. Cannon, a missionary for more than 60 years to Japan, Papua New Guinea and Ukraine, died Oct. 25. He was 85.
He lived a “spirit-filled, faith-full, undaunted and radical life,” said Chris Altrock, minister for the Highland Church of Christ in Cordova, Tenn., where Cannon attended.
Cannon began preaching in 1943. Four years later, after World War II, he and his first wife, RosaBelle, moved to Japan as missionaries.
“I believe Jesus wanted me to go serve among the most unloved people I could find,” he once told Altrock. “And at that time, the most unloved people in America were the Japanese.”
The Cannons worked in Japan for 24 years. They planted 15 churches and helped launch Ibaraki Christian University, four kindergartens and four orphanages. In 1971, the family moved to Papua New Guinea, where they founded Melanesian Bible College.
In 1983 they moved to Memphis, Tenn., and began a training program, Mission/1000.
After RosaBelle Cannon’s death, Joe Cannon married Betty Dollar, a former Realtor who had left full-time work in Memphis to do mission work in Ukraine. The couple ministered in the city of Bila Tserkva.
“We worked together there for another seven years, loving every minute of it,” Betty Cannon said.
In 1999, as he left Japan for what would be his final visit there, he said, “When I die, have a gospel meeting (instead of a funeral). Forget me,” according to Robin Cannon, one of his six children. “May our undaunted passion for the Christ eclipse our self-interest radically.”