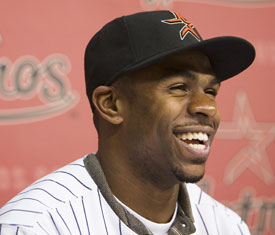 While other National League contenders beefed up for the playoffs, the Braves seemed to keep missing out on players who could’ve boosted their hopes.

Turns out, they landed the guy they wanted all along.
Atlanta acquired speedy outfielder Michael Bourn from the Astros yesterday in a five-player deal, giving the Braves their first true leadoff hitter in at least six years. 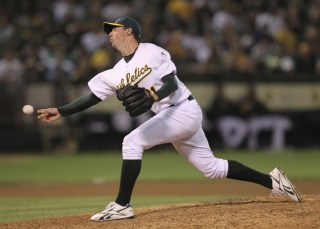 The A’s parted with right-handed reliever Brad Ziegler a few hours shy of the non-waiver Trade Deadline on Sunday, landing left-handed reliever Jordan Norberto and first baseman Brandon Allen from the D-backs.
Ziegler’s Major League debut in 2008 was record-setting: He went 39 innings without allowing a run, and the 31-year-old has followed up that run with fine work. He’s 3-2 with one save and a 2.39 ERA in 43 appearances this year, and hasn’t allowed a home run in 37 2/3 innings — extending to 2010, that streak is at 68 games and 61 1/3 innings.
In his four seasons with the A’s, the only big league team he’s pitched for, Ziegler went 11-13 with 19 saves and a 2.49 ERA in 223 appearances.

Read the full report.
See my new Inside Story column on baseball.