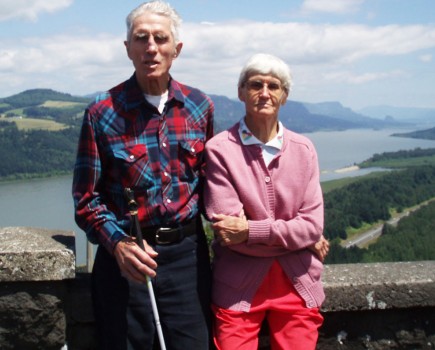 IN WAKE OF TRIALS, ordinary couple possessed  extraordinary hope, as their children recall.

About 40 miles south of the Wyoming border, nestled between two major canyons in the front range of the Colorado Rockies, lies Pleasant Valley.

It was in this tranquil haven, flanked on the west by mountains and on the east by a large bluff, that our parents, Bob and Helen Bland, bought a little farm in 1961 and relocated our young family.

Two years earlier, our father lost sight in both eyes as a result of congenital cataracts.

Rather than let the blindness tear them apart, our parents drew closer together. With courage and resolve, they met each new challenge.

As they transformed the rundown farm into a home for our family, they tore down old buildings and built new ones. Where weeds once grew and ramshackle buildings once stood, a barn, woodshed, hog pen, granary and workshop were erected.

The farm became home to a menagerie of chickens, turkeys, beef cattle, milk cows, hogs, sheep and even a few horses. Dad built a tree nursery to nurture saplings to plant on the farm.

It was in this rejuvenated environment that the three of us grew up, learned hard work and responsibility and, most importantly, saw Christian virtue modeled in the lives of our parents.

Managing a farm, even for someone with vision, is demanding. For someone who had lost his sight, the task could have been overwhelming.

But for Dad, things just don’t happen in a Christian’s life. God has a purpose for everything. Dad’s world of darkness became an opportunity to shed the light of hope to others.

In order to navigate safely around his 12-acre farm, Dad created a network of guide wires, strung just a little over head-high, from the house to the workshop, from the workshop to the pasture and from the sheep shed to the pigpen.

Bells were placed on certain “problem” animals — the rambunctious ram and the over-stimulated steer — to alert Dad when he was in harm’s way.

Like many others, Mom and Dad often struggled financially.

Dad’s blindness meant that Mom became the breadwinner while Dad worked on the farm. It was a difficult adjustment. Still, they met every challenge with a combination of faith in God and love for each other.

Dad frequently reminded us, “You’ve got to bend your attitude to fit your circumstances.”

They still use their farm to serve others, making it a virtual outdoor playground for children of all ages. They built a tree house, rope swing, zip line and sack swing that leaves the most adventurous breathless.

The Bland farm has hosted Easter egg hunts, church picnics and a day camp for children with special needs.

Troubled youth come to the farm to learn responsibility and Christian values.

Dad served as an elder for the Meadowlark Church of Christ in Fort Collins, Colo., for about 30 years until his hearing deteriorated. Mom and Dad have lent their voices for duets at more than 100 funerals and put on special events at nursing homes.

Looking back, we marvel not at the oddity of the “blind farmer and his wife” but at the enormity of their character, their unwavering faith and their unconditional love.