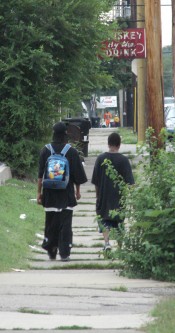 Bobby Ross Jr.
Editor’s note: Former youth minister Gary Spear was sentenced in November 2017 on one count of child seduction, a class D felony.
MITCHELL, Ind. — In this rural community known for its annual Persimmon Festival, two horse-drawn Amish buggies occupy spaces in the Dollar General store parking lot a few minutes before 5 p.m.
Just down the two-lane state highway that serves as Main Street, a dozen teenage boys and girls pile into the Mitchell Church of Christ van.
On the first Monday night of each month, youth group members leave a world of crops and cattle and drive 55 miles to worship, feed the homeless and make Bible-themed crafts with poor children in inner-city Louisville, Ky.
Across the nation, many of today’s youth see active service as an important part of expressing their Christian faith in an authentic way, teens and ministers told The Christian Chronicle.
The Mitchell youth epitomize that spirit.
“This generation of youth has really seemed to grasp ‘the heart of a servant’ aspect of trying to be like Jesus,” said Luke Burris, a recent Mitchell High School graduate. Along with the monthly trek to Louisville, the Mitchell teens also serve closer to home.
They mow lawns, unload moving trucks and sort cans and boxes in the church’s Bread of Life food pantry. They volunteer at ReGeneration, a charity thrift store run by local churches.
“The root of this is that the teens see Jesus asking us to give a cup of cold water instead of just feeling sorry that someone is thirsty,” said Gary Spear, Mitchell’s youth and worship minister. “This new generation of teens knows that a faith that doesn’t cause you to act isn’t much of a faith.”
‘WE ARE THE SERMON’
Nearly 1,000 miles southwest of Mitchell, 25 teens at the Childress, Texas, church signed up for “We Are The Sermon” work camp this summer.
The teens slept in the church building and worked five full days. They cleaned, raked, painted and hauled off truckloads of tornado debris.
“I know our young people in Childress are defining church more as something you are seven days a week, not just something you do on Sunday,” minister Trey Morgan said.
Barbara Duncan’s husband, David, preaches at the Memorial church in Houston.
She joined 25 teens and adults on a recent mission trip to Timothy Hill Children’s Ranch in Riverhead, N.Y.
Her daughter Anna Beth Duncan, 14, and other teens moved thousands of plants from inside the ranch’s greenhouse, cut down trees, painted picnic tables and interacted with the abused and neglected boys who call the ranch home.
Weeks later, the same teens planned a trip to McAllen, Texas,  to help build homes in a colonia near the Mexican border.
In an age when many teens would rather send a text message than engage in an actual conversation, they might not express their faith audibly, Barbara Duncan said.
“But they’ll say it with service,” Duncan said.
In Henderson, Tenn., youth minister Brad Montague said nothing connects as deeply with teens at the Estes church as manual labor in the hot sun.
After a work camp focused on homeless outreach, “one kid actually said he loved it because it was like he was ‘living the Scriptures,’” Montague said.
Nonetheless, some church leaders caution that teen service doesn’t automatically translate into spiritual growth.
Matthew Savage, youth minister at the Southern Hills church in Shreveport, La., praised his teens’ regular service projects, from raking yards to going on mission trips.
But he said, “It is funny how a teenager can be so fired up about serving and yet so selfish at the same moment.”
Often, youth ministers see a dramatic change in teens as a result of mission trips and service projects.
But then it doesn’t last, said Dudley Chancey, associate professor of youth ministry at Oklahoma Christian University in Oklahoma City.
“Parents often comment that the kid was different when he came home — for a while,” said Chancey, who advocates more concentration in youth ministry on Bible study, prayer, fasting and accountability.
‘HANDS AND FEET OF CHRIST’
After a 90-minute trip that includes a stop for snacks and soft drinks at a convenience store, the Mitchell teens arrive in a Louisville neighborhood marked by boarded-up windows and “Beware of Dog” signs.
They’re here to help with the River City Love Squad, a non-denominational ministry that provides a worship service, a children’s class and a meal on Monday and Thursday nights each week. The ministry, whose volunteers range from Pentecostals to Presbyterians, keeps all its supplies in a bright yellow trailer on the gravel lot.
It’s not your typical worship environment.
On this 84-degree evening, the group meets in a parking lot outside a distribution center.
A few people stand toward the back smoking cigarettes and watching the service rather than participating.
Occasionally, a car drives by, blasting music out the window. Or someone gets up and asks if it’s time to eat yet.
Just down the street is a bar with a sign offering “Whiskey by the Drink.”
“We wanted the teens to experience service outside of their usual context,” Spear said of why the Mitchell youth group became involved in this ministry two years ago. “We wanted them to see how different life can be just 55 miles away.”
Any other Monday night, you might find Becky Warren, 15, tutoring, performing with her high school band or hanging out with friends. But once a month, she said she loves the opportunity to reach out to “people that haven’t had a good life.”
Bryan Edwards, 18, said he benefits from worshiping “with people that are so passionate about their faith because that is all they have.” As a result of the experience, Edwards said he has grown spiritually.
“The trick is to remember why you are out here serving people,” he said. “You have to remember that it isn’t about you. Serving people is about being the hands and feet of Christ.”