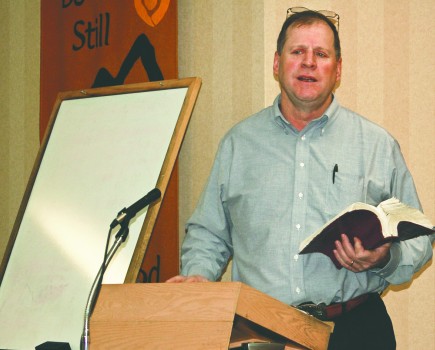 BY JOHN R. IRBY
NORTH DAKOTA CONFERENCE brings together Christians from across the Northern Plains, stresses the need for home-grown evangelism.
BISMARCK, N.D. — Churches of Christ often think of the Great Commission as a call to take the soul-saving Gospel to Africa, China, Latin America and the former Soviet Union.
But mission fields exist everywhere — just around the corner, close to home or just a few states away from the Bible Belt, in places like North Dakota, population 675,000.
Christians from across the region gathered in the capital city of the “Peace Garden State” for the 45th annual Bismarck Church Leaders Workshop. Preachers, elders and members came from North Dakota, Colorado, Minnesota, Montana, Nebraska, South Dakota, Wyoming and Canada.
The theme, “Goads and Nails,” came from Ecclesiastes 12:11: “The words of the wise are like goads, and the words of scholars are like well-driven nails, given by one Shepherd.”

The workshop’s goal is to encourage ministers, elders and future leaders in the Northern Plains — a land that is “skinny” on leadership, said Scott Laird, the workshop’s director and minister for the Great Falls Church of Christ in Montana.
“The majority up here have grown up in the North,” Laird said. “The idea of staying here is a struggle” for those that migrate from other parts of America. “If we don’t grow our own leadership we are not typically blessed with many new members.”
The cold weather, sparse population and abundance of Catholics and Lutherans, buoyed by years of German and Scandinavian migration, often are credited with adding to the Church of Christ’s struggle in this wide-open mission field.
The largest congregation in North Dakota is in Bismarck. The church averages a Sunday morning attendance of about 60 men, women and children and has a full-time minister.
The church in Minot, with about 50 members, was without a full-time evangelist until recently. Only five other congregations exist in the state — a 25-member church in Mandan, churches of about 40 members each in Grand Forks, Fargo and Dickinson and a 50-member church in Williston. None of these has a full-time preacher.
Though small, “North Dakota churches are tough,” Laird said. “You can’t kill them off. People keep on going and serving even though they don’t get a lot of encouragement from outside. Their Christianity is real and important.”
The Great Falls church has almost 250 members. Laird credits that to longtime leadership and an influence from the Air Force base there.
Calvin Chapman, from Faith, S.D., told a story of what goaded a mentor of his into a long life as an evangelist. Chapman and the older preacher were riding in a car, approaching a funeral home.
Chapman asked the preacher what kept him going. After a pause, the man pointed to the funeral home and said he was still preaching because he wasn’t sure everyone who ended up there was ready to be there.
“God uses us to bring light and life to the darkness around us,” Chapman said. “The work of a preacher is to bring about the will of God.”
Bismarck minister Walter Clark said there isn’t much knowledge about the Church of Christ in North Dakota. While not blaming the state’s history and culture, he, like many others, is aware of a “stubbornness” that can play a role in openness to change.
“We need to push for every member to understand they are ministers of the Word and make themselves available to opportunities God may be bringing into their paths,” Clark said.
North Dakota’s growing population provides new opportunities to reach lost souls.
The state is experiencing an oil boom, and new jobs are being created in the energy industry. Unemployment is less than 1 percent in the “oil patch” and about 3 percent statewide. Some fast-food restaurants are paying people $15 an hour to flip burgers. Those who can turn a wrench, drill or fracture a well or drive an oil tanker can make much more.
But what these cash-rich immigrant workers need most is God — not the whiskey pubs and strippers, said workshop participants.
Bruce Goodwin, of Eden Prairie, Minn., summarized the urgent need to reach lost souls in the Northern Plans in the event’s final session.
“Each day we walk among the (spiritually) wounded,” he said. “The word ‘grace’ is experienced so much that the word ‘obedience’ can’t be heard. People don’t know they are living in darkness because that’s all they know.”

JOHN R. IRBY is a member of the Bismarck Church of Christ. He retired recently after more than 40 years as a newspaper editor, publisher and university journalism professor.