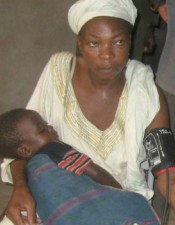 Erik Tryggestad
Church leaders in the central African nation of Chad “sound a cry for help” in a recent letter reporting the devastating effects of two months of flooding.
“Heavy rains … have caused enormous damage, both in terms of material things and human lives,” according to the letter, signed by 10 Church of Christ ministers in the Moyen-Chari Region of southern Chad.
The United Nations reports that more than 445,000 people have been affected by the floods, which consumed nearly 1,000 square miles of farmland. The nation already suffers from a high level of food insecurity — meaning that a large percentage of the country’s 10.9 million people don’t know where they will find their next meal.
The devastation brought scores of patients to the Jordan Health Center, a medical clinic in the southern Chadian village of Dona-Manga operated by Hope Springs International, a Tennessee-based nonprofit supported by church members. Patients from the flooded areas suffer from dehydration, diarrhea and dysentery.
“Of the desperate people who have traveled for medical attention, six people have died,” said Lee Hodges, the nonprofit’s president.
“In the midst of this tragedy, God granted us a major blessing,” Hodges said. “Our ongoing performance during this state of emergency has resulted in a special ceremony being held to award the Jordan Health Center with its full accreditation as a health center by the Chadian government.”
Church members in Geneva, Switzerland, sent $1,500 to a congregation in Moundou, Chad, where Feltoing Djonga preaches. The minister is a graduate of the Bible Training Center in Cotonou, Benin.
Djonga “knows the needs in (the) villages where there are brethren suffering from this excessive rainy season,” said missionary Doyle Kee, adding that the money sent by the Geneva church “is just a drop in the bucket for the need.”
The flooding has swollen rivers in neighboring Cameroon, forcing officials at a dam there to release large amounts of water into rivers that flow into eastern Nigeria.
The resulting floodwaters forced church members from their beds in the middle of the night, said Nathaniel Ajaegbu, a minister in the city of Aba, Nigeria. The Christians took refuge in the meeting place of the Gboko Church of Christ.
“Most of these brethren are farmers,” Ajaegbu said, “but the flood has destroyed everyone’s farms, houses and their belongings. Some of them (have) no clothes to change into.”
In the southern African nation of Swaziland, a recent storm knocked down power lines and tore roofs from buildings — including a newly constructed library — on the campus of African Christian College, a church-supported school. The storm knocked out the campus’ water pumps.
Students and administrators at the school are assessing damage to the campus and to the college’s macadamia nut orchard — a project designed to make the college self-sustaining.
“The best news is that everyone is safe and well,” said Brad Carter, the school’s president-elect.
FOR MORE INFORMATION, contact:
• Hope Springs International: www.hopespringsint.com
• African Christian College: www.africanchristiancollege.org