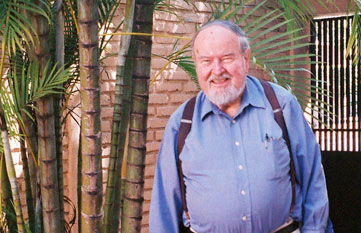 Harris Goodwin, a pioneering missionary to the Spanish-speaking world, died Sept. 7 at his home in Tegucigalpa, Honduras. He was 87.

In 1963, Goodwin founded La Voz Eterna , a Spanish-language gospel publications ministry. The magazine La Voz Eterna (“The Eternal Voice of God — the Holy Scriptures”) was distributed to Churches of Christ and readers in 30 Spanish-speaking countries. The ministry also produced gospel tracts and books.

Goodwin served as editor of the publications for a half-century, until the printed editions were discontinued in 2012 due to soaring international postal rates, said Sue Mozley, the publication’s assistant editor.

La Voz Eterna continues as an Internet ministry, under the direction of the Lawndale Iglesia de Cristo (Church of Christ) in Houston.

Living in Mexico, Goodwin launched Baxter Institute, a ministry training school, in 1964. In 1978, the school moved to Tegucigalpa. Baxter prepares Spanish-speaking Christians to minister across Latin America and, increasingly, across the U.S. Students and friends hosted a memorial service for Goodwin on the school’s campus Sept. 8.

Goodwin also launched medical, dental and nutrition ministries in Tegucigalpa. In 2000, he founded “Jóvenes en Camino” (“Children on the Way”) a home for abandoned street children in El Zamarano, Honduras.

In a 2011 feature on Baxter, Goodwin explained the genesis of the ministry training program, which he launched in 1963:

The
institute had its genesis in the suburbs of Mexico City. Harris
Goodwin, an entrepreneur and minister for the Hollywood Church of Christ
in California, noticed that Mexican ministers were struggling to scratch out a living. He wanted to help.

He
named the school after Leta Baxter, the aunt of longtime Church of
Christ preacher Batsell Barrett Baxter. Leta Baxter had a heart for
“people who had been chewed up by Hollywood” and showed them compassion,
Goodwin said.
In 1978, due to difficulties with the Mexican
government, Goodwin moved the institute to an old coffee plantation in
Tegucigalpa. Getting permission from the Honduran government wasn’t
easy, but God “moved the people that opened the gates, and they keep
opening the gates,” said Goodwin, now 85 and living in the Honduran
capital.

Goodwin was buried beside his adopted Honduran son, Edwin, who died at age 35 from a tropical disease.

See sections of Baxter’s funeral program in memory of Goodwin at facebook.com/institutobaxter. Find additional information in the English section of www.lavozeterna.org.