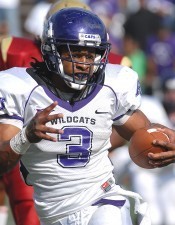 staff reports
ABILENE, Texas — Running back Bernard Scott had a phenomenal junior season in leading Abilene Christian University to a 10-3 record and a second straight appearance in the NCAA Division II playoffs.
He set NCAA Division II single-season records for touchdowns (39), rushing touchdowns (35) and points scored (234). He also set the Lone Star Conference single-season rushing record (2,165 yards). Nine times, he scored at least three touchdowns in a game for ACU.
He twice broke the ACU single-game rushing record, first with a 283-yard effort in a 70-63 win over Tarleton State in Stephenville on Oct. 27, and then again on Nov. 24 with 303 yards in a 76-73 triple-overtime loss to Chadron (Neb.) State in the second round of the playoffs. In both of those games, Scott tied the conference and ACU single-game records with six touchdowns and 36 points scored.