Road notes: Volkswagens and long sermons get ‘respect’ in Jamaica


Blogging from Kingston, Jamaica
OK, first things first. You know that Volkswagen ad that aired during the Super Bowl? The one that generated controversy with its white, Minnesotan office worker speaking in a fake Jamaican accent?
The Jamaicans I’ve met aren’t giving the ad anything but “respect.” 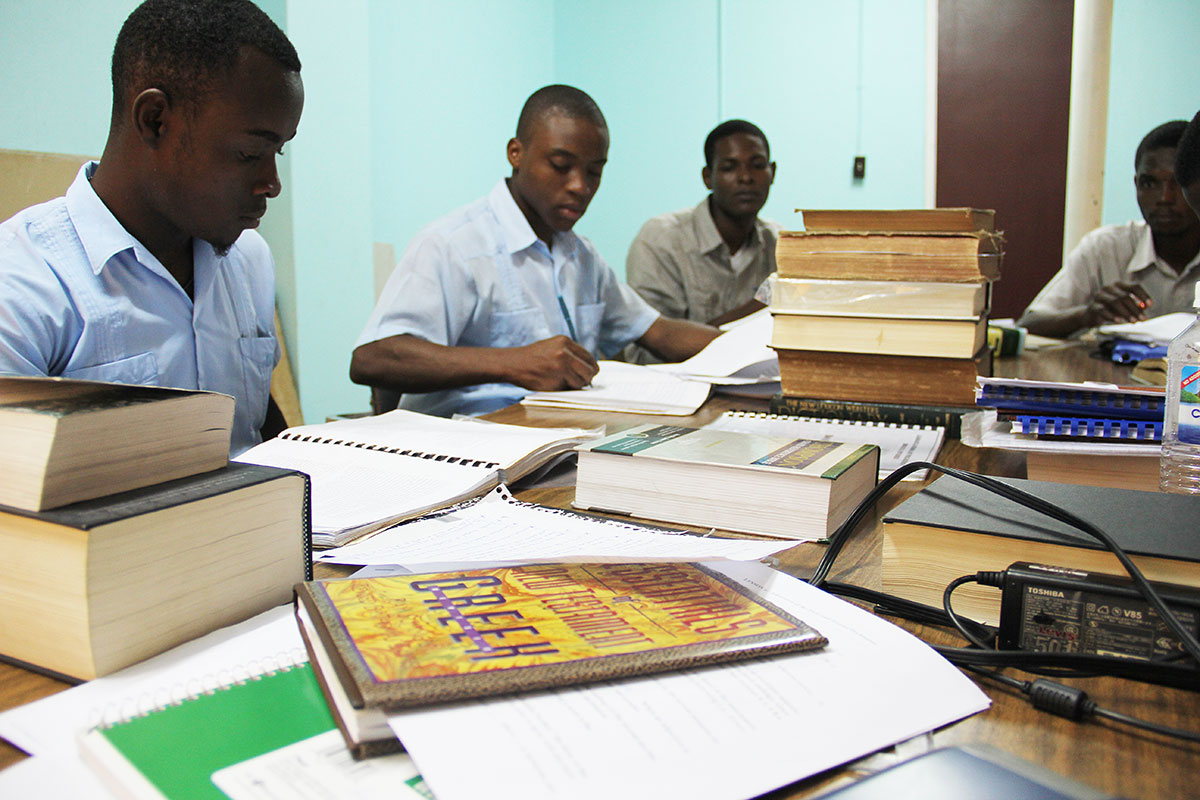 Studnets at the Jamaica School of Preaching review their lessons. (Photo by Erik Tryggestad)

“It’s like they say, ‘Imitation is the sincerest form of flattery,'” said Gladwyn Kiddoe, who has served as director of the Jamaica School of Preaching and Biblical Studies for nearly four decades. He and members of the Mona Church of Christ, which shares facilities with the school, are hosting me during a reporting trip to this Caribbean capital.
(No, I’m not on the beach. Right now I’m taking advantage of the wi-fi in the church building — a renovated movie theater from the 1960s. I am, however, enjoying a pineapple-flavored soft drink called Bigga. Island living at its finest.)
Since the early 1970s, the Jamaica School of Preaching has trained ministers to take the Gospel to islands across the region. Now Kiddoe is focusing its efforts around the globe, teaching the school’s curriculum via Skype and Google+ Hangouts to classes of Christians in Bridgeport, Conn., and the Asian nation of Nepal. Look for a story about that in an upcoming issue of The Christian Chronicle. 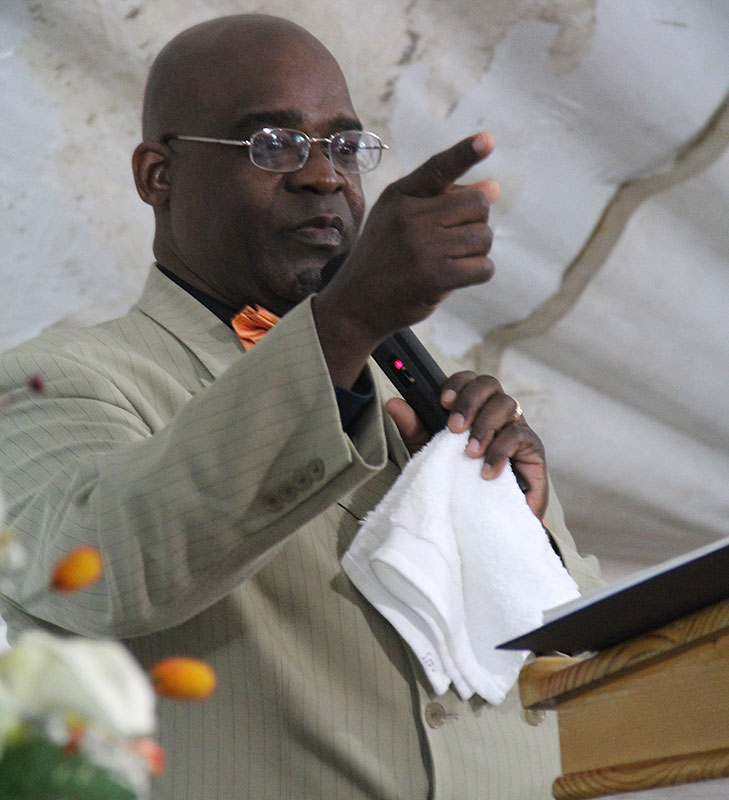 My visit coincided with a two-week gospel campaign hosted by another congregation in Kingston — the Patrick Gardens Church of Christ. It’s an old-school, open-air tent revival, featuring Darrell Holt, an evangelist for the Figueroa Church of Christ in Los Angeles.
It’s the minister’s third trip to Jamaica. Next month he’ll speak at a similar crusade in the Bahamas. He’s something of a pulpit minister and missionary all wrapped into one. Calvin Bowers and other ministers fill in for Holt when he’s island-hopping.
“You don’t leave from under this tent without knowing the facts,” Holt proclaimed as he spoke to more than 100 congregants — representing 10 Churches of Christ in Jamaica and visitors. He talked about a time when he preached to a congregation for two hours and 55 minutes until they got the message.
On this evening, however, his sermon clocked in at a mere one hour, 30 minutes.
I didn’t hear any complaints from the audience.
Just respect. 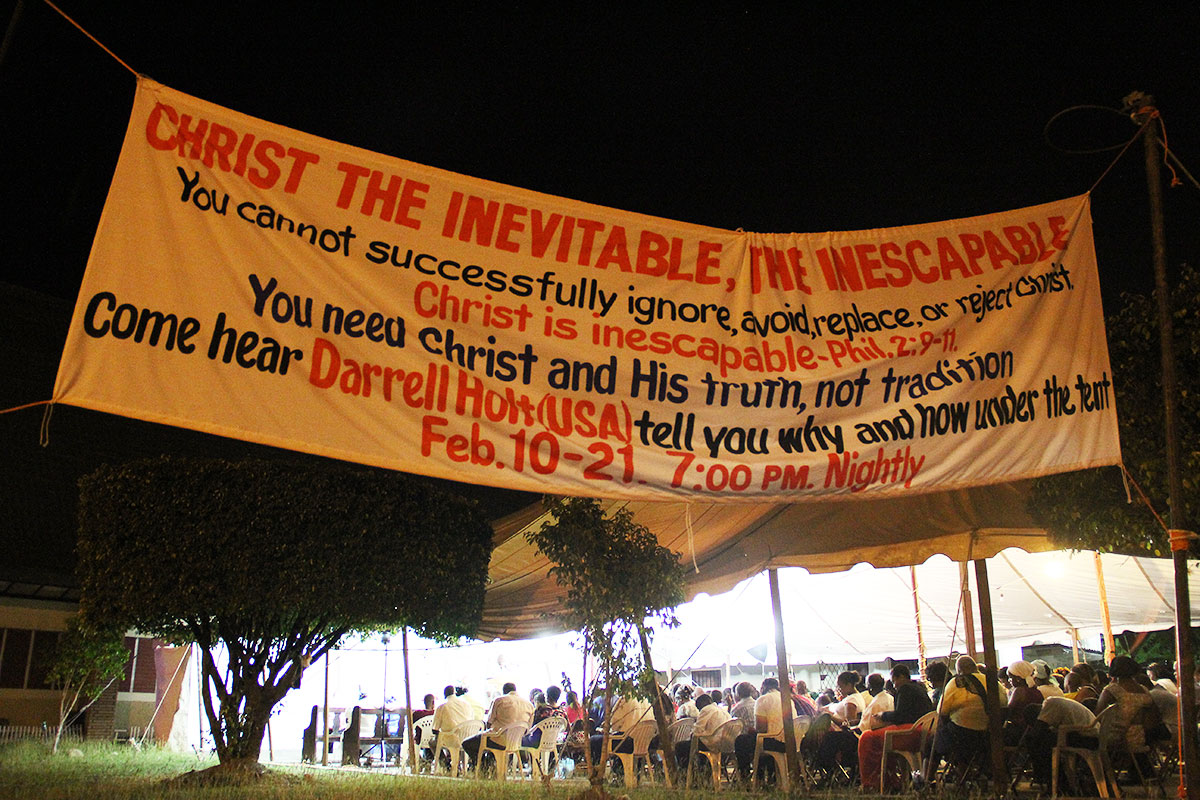 A banner at the Patrick Gardens Church of Christ in Kingston, Jamaica, advertises the congregation’s two-week gospel campaign. (Photo by Erik Tryggestad)