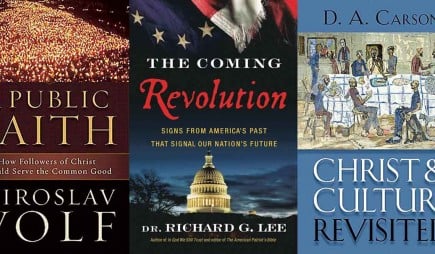 F. LaGARD SMITH
???
Miroslav Volf. A Public Faith: How Followers of Christ Should Serve the Common Good. Grand Rapids, Mich.: Brazos Press, Baker Publishing Group, 2011. 174 pages. $21.99.
????
Richard G. Lee. The Coming Revolution: Signs From America’s Past That Signal Our Nation’s Future. Nashville, Tenn.: Thomas Nelson, 2012.
203 pages. $24.99.
????
D.A. Carson. Christ and Culture Revisited. Grand Rapids, Mich.: William B. Eerdmans Publishing Company, 2008, 2010. 243 pages. $24.
For members of Churches of Christ, the question of political involvement has largely been ignored since the days of David Lipscomb.
Lipscomb was a classic separatist, renouncing all participation in the political process — whether holding office, serving on juries or voting.
A century on, an increasingly pluralist society is forcing a slightly different question: To what extent ought (or can) Christians speak their voices in a public square?
In “A Public Faith: How Followers of Christ Should Serve the Common Good,” Miroslav Volf, director of the Yale Center for Faith and Culture, urges that members of different religious communities should argue with one another from their various faith perspectives, then vote.
What religious folks must not do, says Volf, is retreat from the public square, a move guaranteed to cede public policy to secularists, who extol the virtues of religion-free public policy, all the while imposing the most totalitarian, intolerant faux-religion possible.
The specific question posed by Volf is how followers of Christ should serve the common good. Should they “engage in electoral politics” or, rather, “concentrate on transforming the moral fabric of society through religious awakening?” Volf’s much-labored answer is both, but with a nod to electoral politics.

In seven chapters, Volf first explores what he sees to be “malfunctions of faith,” then suggests positive ways of having an “engaged faith.”  Disappointingly, he never quite delivers on the crucial question of how the believer should engage with culture.
In stark contrast to Volf’s vague pleas for engagement and harmony is the electrifying “The Coming Revolution: Signs From America’s Past That Signal Our Nation’s Future,” by Richard G. Lee.
Lee is founding pastor of First Redeemer Church in Atlanta and author of the popular “The American Patriot’s Bible.”
For those who thrive on American patriotism, manifest destiny and exceptionalism, this book is all red meat. But for any progressives within our fellowship, it will be hard to swallow.
If Lee had his way, every Christ-follower would be as active in politics as in the life of the church. (David Lipscomb would be spinning!)
Lee’s thesis is that America is on the verge of a second revolution — as in the Tea Party repudiating big government, radical environmentalism, union activism, lax border security and “Obamacare.”
He begins, however, in a surprising fashion, painting in the first four chapters a succinct, credible and enlightening history of early America, particularly The Great Awakening and how it contributed to the American Revolution.
In later chapters, the reader might wish that Lee had more fully explored the implications of Romans 13:1-7 — in which Paul instructs the early Christians to obey government authorities. Lee’s only mention of the passage comes with reference to one colonial preacher who defiantly explained that “Common tyrants and public oppressors are not entitled to obedience from their subjects, by virtue of anything here laid down by the inspired apostle.”
The final book charts a third way — not a midway, but a higher way than either of the first two.
In “Christ and Culture Revisited,” D.A. Carson, professor of New Testament at Trinity Evangelical Divinity School, cautions against an undiscriminating application of Richard Niebuhr’s classic five paradigms of how Christians have interacted with culture (Christ against culture, Christ of culture, Christ above culture, Christ and culture in paradox and Christ the transformer of culture). Carson argues that each alone is reductionist, not unlike the six blind men who sense various parts of the elephant, but fail to understand the whole creature.
Stressing the need for a more comprehensive biblical approach that will serve believers in every political, geographical, temporal and cultural situation, Carson posits that “the great turning points in redemptive history” (creation, fall, incarnation, atonement, resurrection and final judgment) must inform our understanding of the relationship between Christ and culture.
Carson’s encyclopedic grasp of theology, philosophy, history and contemporary dialogue will challenge the reader in every sense of the word.
The richness of his scholarship is marred only by the irony of his many references to the “new earth.” The materialist, carnal essence of this view of heaven (gaining respectability even among our fellowship) arguably reflects Niebuhr’s “Christ of culture” rather than a more biblical “Christ above culture” or “Christ against culture.”

Carson’s brand of political engagement fills in Volf’s blanks. In order to “do good to the city” (Jeremiah 29:1-7), Carson argues that we must “take our obligations toward a participatory democracy seriously” — including voting and influencing legislation — but warns against the trap of Christians making essentially secular arguments, both because it risks the charge of dissembling and affirms the secularist insistence that faith ought to be privatized.
Carson leaves us with the sober reminder that, no matter how much salt and light Christians might be within our various cultures, the tension between Christ and culture will not be fully stayed until the consummation of all things.
F. LaGARD SMITH is a professor of law at Faulkner University in Montgomery, Ala. He has authored some 30 books on topics legal, doctrinal and devotional. His latest is “Portrait of an Obama Nanny State — If It Can Happen to the Brits, It Can Happen to Us.”