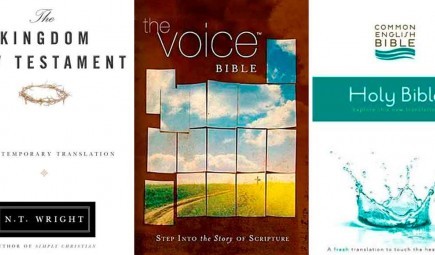 REVIEW: New Bible translations’ strengths may also be their weaknesses

C. Michael Moss
???
N.T. Wright. The Kingdom New Testament: A Contemporary Translation. New York: HarperOne, 2011. 544 pages, $25.99.
?? 1/2 The Voice Bible: Step into the Story of Scripture. Nashville, Tenn.: Thomas Nelson, 2012. 1,760 pages, $39.99.
??? 1/2
Common English Bible. Nashville, Tenn.: Common English Bible, 2011. 1,264 pages, $14.95 (softcover).
Translating the Bible into English is a never-ending task, due to changes in the English language, scholars clarifying the use of Greek and Hebrew words and the discovery of new manuscripts.
The English-speaking world has been blessed with many translations — all of which have strengths and weaknesses.
Recently, three new translations came on the market. One is “The Kingdom New Testament: A Contemporary Translation” by N.T. Wright.
Wright, a respected New Testament scholar, says of his translation, “I have taken a particular view on point after point of interpretation, and my understanding of the many controversial passages in the New Testament shows up, naturally enough, in the translation as well.”
This both strengthens and weakens the translation. “The Kingdom New Testament” often employs pleasing, informal language, with some fresh word choices, which make for engaging reading. Unfortunately, its flaws should prevent it from being one’s primary study Bible.
Perhaps the most troubling translations are due to Wright’s being a proponent of women’s ordination. On these occasions, his translation is not faithful to the original text. The most glaring error is 1 Tim 2:11-15. While verse 11 should read “Let a woman learn quietly with submissiveness,” Wright translates it thus: “They must study undisturbed, in full submission to God.”
In verse 12, the text should read, “I do not permit a woman to teach or to exercise authority over a man; rather, she is to remain quiet.” Here Wright does not even paraphrase — but radically alters — the meaning: “I’m not saying that women should teach men, or try to dictate to them; rather they should be left undisturbed.”
No matter one’s position, the translator must allow the text to speak for itself.
Nevertheless, if a reader keeps a close eye out for these biases, this book can be enlightening, as it is the work of a world-recognized New Testament scholar who brings his study to the translation.
Another new translation is unfortunately flawed by its translators’ interpretations. “The Voice Bible: Step into the Story of Scripture” began as a project of Chris Seay, a leader in the Emergent Church movement. This will cause many to question the work. “The Voice: New Testament” and “The Voice: Psalms” were published in 2008 and 2009. According to this volume’s introduction, the translation team included an “award-winning fiction writer, an acclaimed poet, a pastor, Greek and Hebrew authorities and biblical scholars.”
The beauty and difficulty with this translation is in its formatting. Italics are used for words not directly tied to a dynamic translation of the original language. These words or sentences supposedly contain information that would have been obvious to those originally addressed in the Gospel or letter.
Outlined boxes delineate material that expands on the theme, not taken directly from the original language. A screenplay format is used for dialogue, perhaps inspiring readers to imagine the characters’ voices and actions.
There are some unusual translation decisions made here. In John 1, Jesus is not the Word, but the Voice. Messiah/Christ is rendered “Liberating King.” “Baptized” is rendered “ritually cleansed.”
In the creation story, at the end of Genesis 1:2, the translation adds, “Then there was the voice of God,” making a connection to John 1:1 where Word is rendered “Voice.” This is a connection one might make but is clearly not in the text. In the Psalms, “Yahweh” is rendered not LORD as it is in most modern translations, but “Eternal One.”
“The Voice” has much in its favor but also some important weaknesses. The real advantage of the translation is that it can easily be adapted for a dramatic presentation or skit — with minor changes due to translation concerns.
The third work, “The Common English Bible,” is a much more traditional committee work, making a serious effort to use the language of the people.
The group that sponsored this translation and publication effort is a collaboration of the Disciples of Christ, Presbyterian Church, Episcopal Church, United Church of Christ and the United Methodist Church.
It is written on a seventh-grade reading level. (In comparison, the New Revised Standard Version is written on an 11th grade level.) Four years in the making, the Religion Newswriters Association named its release one of the top 10 stories of last year.
The Common English Bible avoids traditional language. John the Baptist does not say, “Repent,” but “Change your hearts and lives” (Matthew 3:2). “Son of Man” is translated as “Human One,” and “Behold” as “Look.”
Other attempts at so-called “common English” result in inaccurate language. “Blasphemy against the Spirit” becomes “insulting the Spirit” (Matthew 12:31). “Insulting” is too weak. In 1 John, the phrase pleasingly natural, “God’s seed,” is replaced by the strangely scientific “God’s DNA.” In the beatitudes, “Blessed” is translated as “happy,” trivializing the term. “The poor in spirit” is rendered “hopeless,” which is not the meaning of the expression.
There are places where interpretive decisions do not even produce a notation. In Romans 3:25, the Common English Bible tells us that Christ’s sacrifice is “through his faithfulness,” rather than “to be received by faith,” as the English Standard Version reads. Christ made the sacrifice, but we must accept it, and this verse omits that life-saving truth.  Thus, this translation can offer insights into certain denominations’ faulty views of important texts.
As a whole, however, the Common English Bible is a serviceable translation as long as one is aware of its weaknesses. One can easily read it alongside his English Standard Version or New American Standard Bible and find, at times, significant insights and simplification of the language.
C. MICHAEL MOSS is dean of the College of Biblical Studies and Behavioral Studies at Ohio Valley University in Vienna, W.Va. He has taught Bible at the college level for nearly 30 years.